A hit and miss weekend. 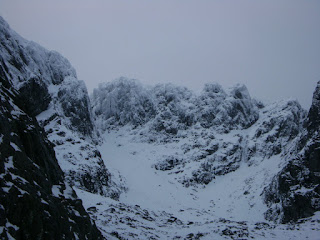 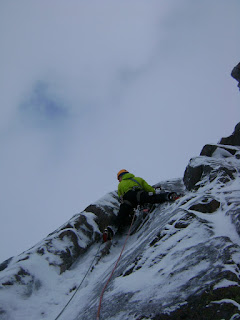 Battling with the first groove on Original Summer Route

On Saturday Alex, Ken, Dave and I took a walk up the Ben with Observatory ridge in mind. The forecast had suggested that the freezing levels would drop and we were hoping to find good firm neve but instead we found slush at 900m and my watch was still reading +3c. We decided to save are self the misson and just had a wander around to look at other conditions. There are many of the freeze/thaw lines visible but still need to fatten up. The upper Buttress' were rimed but it was thawing all the way until just below the summit.

On Sunday we took a drive over to the Cairngorms and because of a couple of delays we opted for an easier and shorter route. Original Summer route is a fine, sustained mixed route on the left side of Aladdin's Buttress. Very little snow fell during the day but the wind did pick up and start to shift some of the existing snow around and we found a couple of areas of slab at the bottom of Aladdin's Colouir.
Posted by Scott Kirkhope at 04:26