It's been a damp few days in Fort William. There are reports that the water ice routes are still worth climbing as are the easier buttress routes. The weather is due to turn cold again over night and the wet snow and ice will firm up and give some excellent climbing.
Posted by Scott Kirkhope at 04:30 No comments:

Back in the Fort.

I arrived back in Fort William last night and woke up this morning to see the snow had thawed back to about 600m. Above this there is still a reasonable cover and above 900m there is still a lot of snow. We are forecast a slow thaw for the next couple of days then we are due a freezing temps overnight and just a slight thaw over the day. These conditions should start to thicken the ice on the routes higher up the mountain. At the moment it looks like the lower ice is sill holding in but I've not climbed it myself so I can only speculate.
Posted by Scott Kirkhope at 06:13 No comments:

Out for a quick blast. 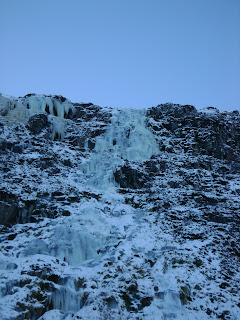 Looking up at the falls from the top of pitch one.
Most of my regular climbing partners are either away for Christmas or sunning themselves in Spain so I was going to do nothing today but by 10.30am I was already bored. A packed a bag and headed for Sgurr Finnisg-aig falls on the lower East side of Aonach Mor. I left the car park at 11.45 and topped out at 14.15 and took the gondola back down. The ice wasn't as well formed as I would of expected so I missed out the first pitch which looked a bit thin and started on the second and easier pitch. The ice was in pretty good nick, in places it was good and chewy but there was some brittle ice around as well. I carried on up to the upper fall which is the crux of the climb. From the bottom it didn't look too well formed but when I got there it was perfect. So I got my head together and started climbing. It was a great 40m pitch and the only real difficulty was when I stepped off left onto a small ledge for a rest and had to make a couple of interesting moves to get reestablished on the main line. I'm off to see family for a few days but I might just try and get a day out in the Lakes whilst I'm at it. 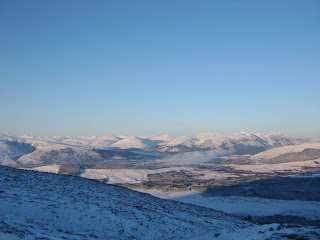 Looking North-West towards the Great Glen.
Posted by Scott Kirkhope at 08:07 No comments:

On Sunday Dave and I wanted a fairly leisurely day and with all of the snow about we thought we would stay reasonably low. So we headed to the west face of Aonach Dubh to have a look at the screen and No.6 gully. As we approached we realised that some one was on the screen so we headed straight for No.6 gully(IV,4). This is a great ice route taking you through some really impressive scenery. We missed out the first couple of little steps as they weren't formed and traversed in just under the first descent sized pitch. It is so easy to forget that winter is still really only starting, so the ice was a bit thinner than last year when I climbed it. It didn't disappoint though and still gave us four good pitches of climbing but I would say maybe a grade harder at the moment. On the way down we got some great views of conditions on some of the neighbouring crags. 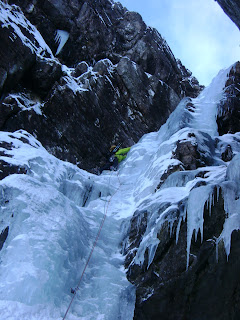 Dave on the final ice pitch. 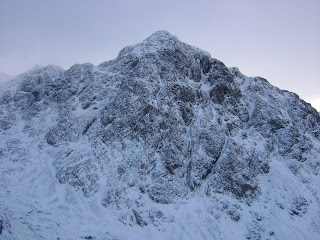 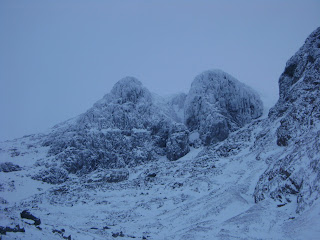 Diamond Buttress and the fantastic Church door buttress on the right.
On Monday I headed out with a few people who were up from Wales to sample some Scottish winter. We decided on Stob Ban which is a fantastic and reasonably short day out that has a bit of everything. The stronger winds of the last couple of days had shifted quite a lot of snow about and we found some areas of very firm slab on a no. of aspects that would have been worrying if they had been of any great size but all were avoidable. Day off today to finish sorting out stuff for Christmas. 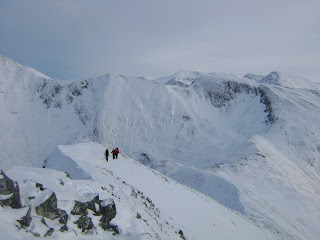 Heading up the final ridge of Stob Ban with the Ring of Steall in the back ground.
Posted by Scott Kirkhope at 04:14 No comments:

It has been snowing on and off for the last 36 hours in Fort William which has left about 4-5inches of snow at sea level. I went up onto Nevis Range this morning with a few friends to get the first boarding of the season. There is a good early season cover up there for skiing but you still have to dodge a few boulders. There are ares of loosely bonded windslab deposited on all of the expected places. The snow fell with very little wind but today at the summit there was a lot of snow being shifted about on a variable wind direction. I had a quick look over at the East face which didn't look as white as i was expecting but some soft cornices were starting to form. I did see one team heading round to the West face but that was it. Probably better going for the lower level ice for the next few days unless you're willing to break trail the whole way.
Posted by Scott Kirkhope at 05:35 No comments:

It's another Beautiful day here in Fort William. There has been a heavy frost overnight which can only be a good thing for conditions higher up and even the lower level ice. I think best bets for routes are the ridge lines at the moment. I've included a photo taken yesterday from the summit plateau of the Ben. 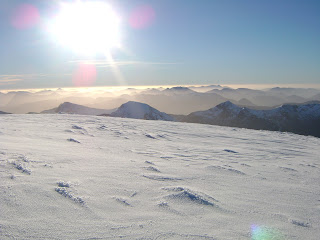 Posted by Scott Kirkhope at 04:15 No comments:

Oh! How things have changed.

Ive had a few days off over the weekend to catch up with some family. On Wednesday last week Alex and I had a go at Gutless(IV,5) on the Douglas boulder but just like the team a couple of days before us we found the upper chimney completely bare inside so we abseiled off. Today I headed up to the Ben with Ken hoping to get on Gargoyle wall or Lost the place. We made a reasonably early start to try and beat the crowds but as soon as we arrived at the CIC hut it was clear that the thaw from the last few days had taken it's toll. The upper crags in Coire na Ciste where completely black and a lot of the snow that we had hoped might of turned into ice in fact had just disappeared. The snow pack is reasonable variable. The thaw seems not to have penetrated too deep and only the top crust appears to have refrozen. It was still hard going in some places. We decided not to waste the day and followed Al Halewoods footsteps up Reaburns easy route to the summit. We then decided to go down Tower gully so we could get a look at Indicator wall and Observatory Buttress area. These were also very black with little snow and ice present. It felt very alpine today. Teams were on Ledge route, Tower ridge, Green gully and a very thin looking Combe gully. 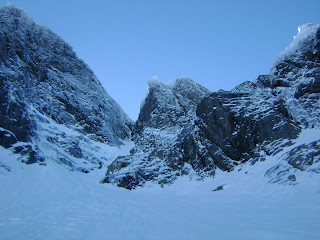 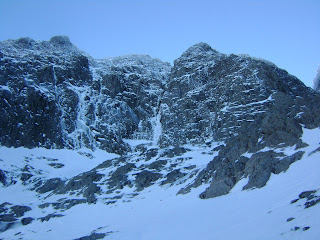 Hadrians wall is the ice line on the left and the bottom of Point 5 is in the middle of the picture.
Posted by Scott Kirkhope at 07:59 No comments:

Yet another fine day. 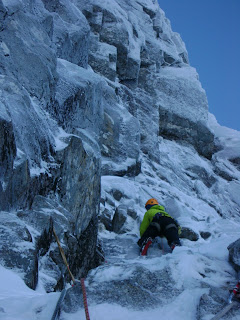 Teetering up the slab on pitch one.﻿
After having a couple of days to get over my hangover from some xmas drinks on Friday Alex and I headed back up to Stob Coire nan Lochan again. This really is a great crag with so many mixed lines to go at that it keeps calling us back. We were still both feeling the effects of the hangover so we chose to go for any easier route and picked Ordinary route(IV,5) on the Summit Buttress. Lets just say I had to sort my head out on the first pitch a bit quicker than I was expecting when I found my self teetering up a slab on mono sized edges and with blind hooks. After that I felt as fresh as a daisy. The next couple of pitches were a bit of an issue as two different guide books give two different route on their topos. So we spent some time looking around but just decided to skirt around the side and continue to the top. It was fairly quiet in the corrie but teams on the usual routes and a couple of teams on Crest route(V,6), a team on Tilt(VI,7) and Donald King and his partner finishing of a FWA of Satyr, a summer E1 5a. 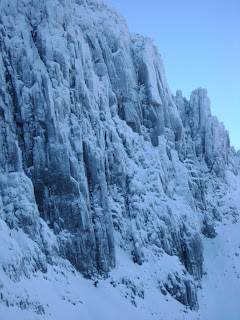 Donald in the red jacket in the middle of the picture.
Posted by Scott Kirkhope at 04:05 No comments:

News from the Ben.

I had a little wonder on to the Ben today. It is all still looking pretty white. The lower ice falls are starting to thicken up and it looks like the mixed high up is still in good condition. I saw teams on Tower ridge and Gargoyle wall but other than that it was quite quiet. I bumped into Al Halewood on the way down who said he had fun trying winter chimney but had to bail off.
Posted by Scott Kirkhope at 07:57 No comments: