Yesterday I was out on the Ben with Ken and Mike and it was a stunning day. After a bit of deliberation we decided to go and have a look at Pinnacle Buttress direct. The heavy freeze has done a world of good with rock hard neve all the way. Mike set off up the first pitch which gave an interesting icy mixed pitch. I did a quick link pitch which brought us to a groove in the middle of the face. We weren't sure whether this groove had been climbed before but we fancied an adventure. A couple of pitches later and we were stood under the west side of the Great Tower. Mike lead us on up and we finished up Tower Ridge to top out in the sun. A great day to be out in the mountains. See Mikes video on his blog. 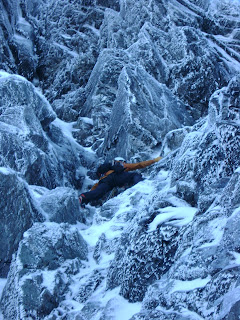 Mike making his way up the Great Tower.
Today I was out climbing with Ivan who had done a intro course a couple of years ago and just wanted to cover some more difficult ground to get a feel of it. We decided on Stob Coire nan Lochan because it gave us a few more options.
Once we arrived in the corrie we soon realised our options were more limited as the thaw from last week has taken its toll. All of the Buttress' were black and Twisting Gully didn't look complete  and the cloud was covering most of the crag. So we headed for the SC Gully and kept our fingers crossed. The route thankfully was climbable if a little thin in places and perhaps warranted III,4 today. We descended down Broad Gully and decided to get another quick one in and climbed NC Gully, which was holding more snow and was a straight forward climb.
The snow at the moment in the corrie is fantastic and what ice there is, is good. The only routes really in condition at the moment are the gully lines and the grade III/IV buttress routes. A team did climb Twisting Gully but I didn't get a chance to find out how it was. 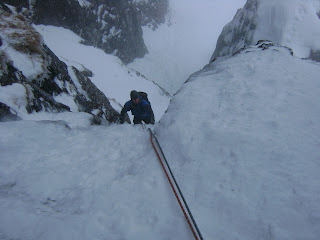 Ivan on the first steep icy step in SC Gully.
Posted by Scott Kirkhope at 12:58