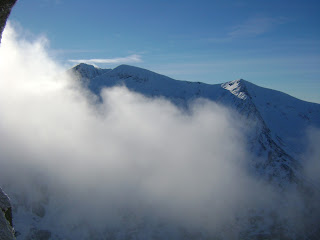 The summit of the Ben and Carn Mor Dearg just peering through the breaking cloud.
Day 2 with Ivan and he wanted to do a mountaineering route to look at the different techniques you might use and the kind of terrain you might use them on. So we headed to the West face of Aonach Mor, this is a great part of the mountain with lots of ground at about grade II/III and usually quiet. The cloud was in when we arrived and this face is notoriously difficult to find the base of the routes in the clag.
We made are way up the steep snow slopes to the start of the routes to find the lower parts of the buttress' to be a bit bare. Just to our left was a snowy gully which split the buttress in two so we headed for that. Three rope lengths of grade two later and we found ourselves with a choice. To the left there was a 30-40m ice fall at about grade three or on the right there was another ice fall or some turfy mixed ground. We chose the left and it gave an excellent pitch but by now the cloud had cleared and the sun was out warming the crag so we were being showered with stuff from the gully above. About 150m of grade I brought us onto the final ridge and an amazing finish to the summit bathed in the sun.
There were some good reports from the East face but a lot of parties found themselves on the wrong route as they had started in the clag too. By the end of the day any rock that had been exposed to the sun was black again. 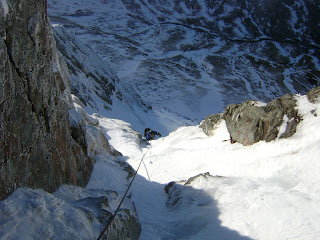 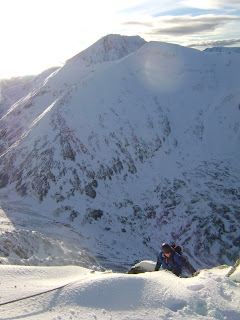 The final part of the ridge with the Ben in the background.
Posted by Scott Kirkhope at 12:16