Back on the Ben. 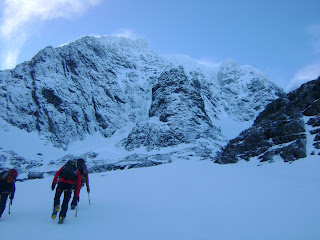 Heading into Observatory Gully with Observatory ridge in the middle.
I was out shadowing Mike again yesterday and his client had been out with him a couple of times before and this time fancied some steep ice. We arrived at the CIC hut to see a team in point 5, a team round the corner on Orion direct and a team starting up Minus 2 gully(first pitch still looks thin). We decided to go for orion as it meant we wouldn't be stuck in a gully with teams above kicking stuff down on us.

We geared up at the foot of Observatory Gully and then mad our way up to the base of the route. As we turned the corner we saw there were about 6 teams all gearing up and it turned out most of them sere heading for orion and two teams had decided on Zero gully because it was already too crowded. We decided to link a few routes together to try and avoid the traffic so we linked Orion Directisima, Slav route, Zero gully and Observatory ridge to give a big day out at about V,5.

Other teams were on Hadrians, Observatory buttress, and a few teams on Tower ridge. The climbing was pretty steady with good snow ice most of the way but poor protection and belays and in some places it was cruddy as the fresh snow had insulated the ice and prevented it refreezing as the temperatures had dropped.
Posted by Scott Kirkhope at 04:13