With a better forecast over East in terms of weather and avalanche we decided to go to Creag Meagaidh. We arrived at the car park to find only two other cars and rain, we kept our hopes high and our heads down and started walking. The freezing level was forecast for 800m but it was still sleeting when we arrived in the corrie.
We had our sights on Smiths Gully(V/VI,5) depending on which guide book you looked at and both of us really wanted to do the route. Alex started up the first pitch which gave good axe placements but screw placements weren't fantastic. As he approached the crux bulge of the pitch the ice started to turn very sugary and both axes started to shear, he gave one good swing and a big plate of ice fell off leaving exposed rock. He made a wise decision and started to down climb, half an hour later and he was back at the belay.
Not wanting to waste a day we carried on up Reaburns to have a look at Ritchies gully which looked in a similar kind of nick so we just carried on to the summit and walked out. 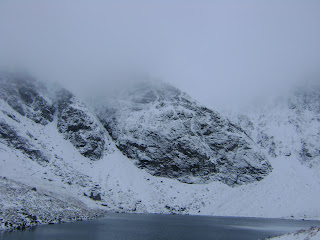 Pinnacle Buttress in the middle. You can just make out the line of last post on the right.
There were a few snow showers today with light winds but the freezing level was closer to 1050m and there were a few patches of slab around but most were avoidable. There was a 6 inch layer of quite firm slab sitting on top of some graupel which was giving us some worries and if this layer stays buried under any new snow it could become an issue.
John climbed Last post and the Wand saying the ice was a bit cruddy lower down but improved with height. I think a lot of the routes need a couple of days of freezing temps to consolidate them.
Posted by Scott Kirkhope at 11:05