A good look around the Ben. 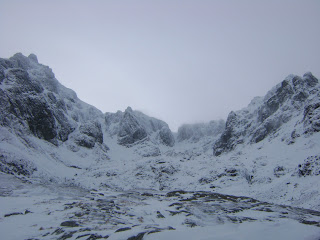 Coire na Ciste.
As part of my progression before my MIC ass. I'm spending some days shadowing Mike Pescod who has kindly agreed to be my mentor. Today was one of them and Mike was planning on taking his client up the S.W. ridge of the Douglas boulder. When we got there we changed our mind and headed for a icy groove just to the right of Fawlty Towers.
This gave a great little route with a small ice step at about grade III and a little mixed step at about IV. The top of the route brought us out on top of Tower Ridge about 50m up from Douglas gap. We descended the east flank and headed back to the car.
When we walked in this morning the cloud was pretty low but this lifted just in time for us as we arrived on Tower Ridge.
This was almost the prime spot to have a look at conditions. The Minus face is coming on, there is ice in all three gullys but they are not quite complete yet. The Orion face has ice on it too and there was a team on Zero gully. On the other side of Observatory ridge, Hadrians and point 5 are looking fat, there were three teams on Observatory buttress and Indicator wall and Gardyloo buttress are getting whiter.
On the other side of Tower ridge Vanishing gully is still looking good and all of the crags in Coire na Ciste are white although we didn't see anyone in there today and there looked to be a lot more snow higher up. Mega route X and the shroud are starting to form but still have a long way to go yet. Boomers Requiem looked good and there were a couple of teams on Compression cracks. Even as low as we were the turf was frozen and the old snow had firmed up giving good axe placements in the snow.
The weather tonight and tomorrow are going to change things in terms of mixed climbing but I think the ice is only going to keep getting better. 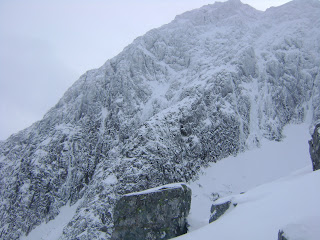 The Minus and Orion faces with Hadrians and 0.5 on the right. 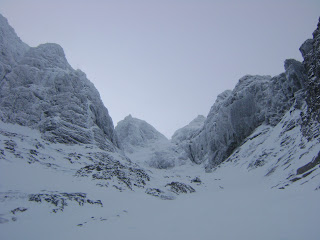 Looking up Observatory gully.
Posted by Scott Kirkhope at 08:45