What a difference a day makes. 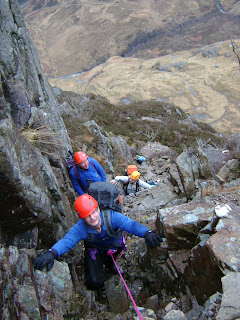 The boys enjoying some sunshine on the Zig Zags.
Yesterday I was working in a very spring like Glen Coe for Abacus Mountaineering. Ken and I were working with a very sociable stag do who wanted a day out with a bit of adventure. The snow line had gone up a very long way due to the thaw this week so to break up the walk in we opted for the Zig Zags on Gearr Aonach as our way up to Stob Coire Nan Lochain. Once we got a view of the coire we realised we had a long walk to find the snow. We made our way up the East ridge and didn't have to put crampons on until the last 100m. We continued down the West ridge and back to the car and a quick pint at the Clachaig. 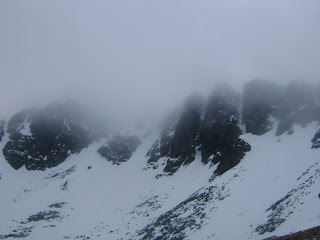 Some very black looking crags in Glen Coe.
After hearing some good reports about Coire an Lochain in the Cairngorms from yesterday we had an early start today to try and beat the crowds. We left the Car park at about 7.30am with only a couple of teams in front of us. James and I started along the path to Lochain behind Ken and Alex who were looking at the same line as us. There was fresh snow on the ground and the turf was frozen at about 700m so James and I quickly changed our plans and headed for Coire an-tsneachda to have a look at what had changed from yesterday. We arrived in a very quiet coire and decided on The Lamp (V,6) on Aladdin's Buttress.
The rock was covered with snow and the turf was frozen so I set off up the first pitch. The first pitch starts up a slabby groove and then steepens at about third height and gives a steep and sustained pitch with excellent hooks and in current conditions loads of gear placements. There were still a couple of loose blocks on the right wall but these should freeze in the very near future. Pitch two pulls out from the belay and climbs a slabby ramp to the foot of the final groove. The groove above didn't look as 'wintery' as we would of liked so we decided to ab of and go and have a look at the direct start of Original summer route which goes at the same grade. This too didn't really look as 'wintery' as we would of liked so we decided on coffee and cakes back at the ski centre whilst we waited for Ken and Alex. They had a good day on Savage Slit (V,6) saying it was in similar condition with lots of helpful neve and clear gear placements. 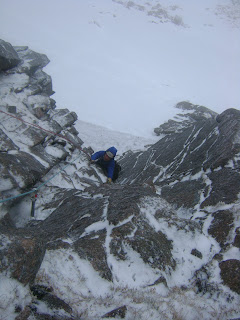