Cutlass(VI,7) is a route I have been wanting to get on for a while but as always conditions and partners and work haven't lined up, yesterday though it all came together. James had a long day on Hadrians the day before and wasn't too fussed about getting a route in but was happy to hold my ropes for me so off we went. A nice leisurely start and we were at the foot of the Douglas Boulder for about lunch. James ran up the first pitch and put in the belay before the crux corner and I followed him up. The crux of this route is a 15-20m corner with a helpful crack in the back but is still sustained climbing even once the crux has been passed. Today though the crack was chocked full of ice and from the belay I was struggling to see any gear. So after a bit of a talk to myself I launched up the crux pull to get established in the corner. As I had thought from the belay gear was at a minimum. In total I only managed to get in six pieces of gear and three of those were in the first five metres. It was a full on winter day with spindrift pouring down the corner and then being blown back up and smacking you in the face but one of those rewarding days where you feel you really earned it. James ticked off the third pitch and we abseiled into West gully which thankfully the wind had been blowing up so we could walk down safely. 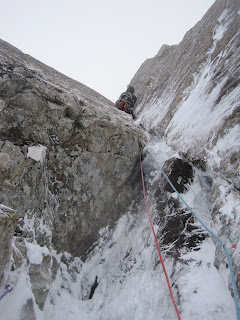 Me nearing the top of the corner on pitch 2. 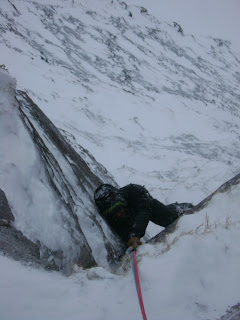 James making the last couple of steep moves.
There were about two hours of snowfall yesterday which fell on some strong winds. Wind slab was building underneath Vanishing gully which saw three teams battle against the spindrift coming down. There were no signs of anyone having been into Coire na Ciste but their tracks might have just been blown in. Other teams were out on Hadrians wall direct, Tower scoop, Astral Highway and Compression cracks but a quiet day on the mountain. Creag coire na Ciste and Number three gully buttress looked white as did the Combe but getting to them I think is still a problem. 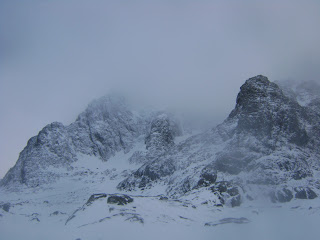 Looking into the Observatory gully area and the Orion face.
Posted by Scott Kirkhope at 03:41