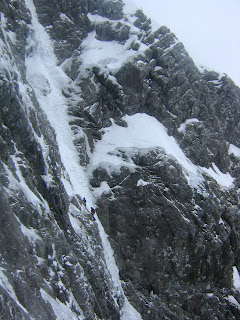 Climbers on Zero.
I was out on the Ben yesterday with Simon who wanted to get a classic V. He had shown some interest in Orion as he had already done point 5 and some of the other classics. It was a quiet walk in with very little sign of anyone else, as we came round into Observatory gully we saw a couple of teams heading round the corner, we geared up and kept our fingers crossed. Thankfully one team had gone for Orion and one for Zero gully so we had a clear run. The first pitch was booming a little but the ice just got better as we gained height with fantastic first time placements and good screw placements too. I was working for Abacus Mountaineering today and Mike was on Orion too. 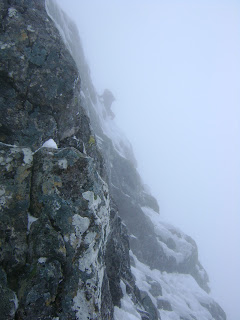 Simon seconding Mike on the second slab rib.
There were a couple of snow showers during the afternoon but on the whole it stayed dry but cloudy. Other teams were on Zero which looked good, N.E. buttress and 0.5. The team on 0.5 said it was very stepped at the moment and said it felt about grade IV. Reports from friends said that it was busy in Coire na Ciste and Green gully, The cascade and Fine Gourmet were in similar conditions. 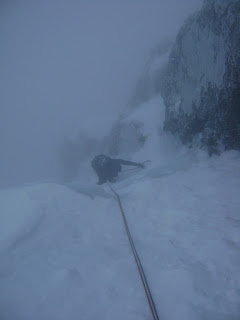 Simon just finishing off the exit chimney.
Conditions today have taken a turn for the worst with high winds and heavy snow fall on the tops. Although it might mean things are a bit grim for a couple of days it does hopefully mean winter will last a bit longer.
Posted by Scott Kirkhope at 00:43