On Saturday Simon and I headed up to the Ben with N.E. buttress as our objective. The forecast was for heavy and persistent snow to come in late afternoon so we were hoping to be at least high on the route if not finished by the time it came in. As we left the car a few snow flakes were falling but nothing much. By the time we had arrived at the foot of Observatory gully the snow was now coming down hard and there was wave after wave of spin drift coming down the faces.We had planned to get onto the ridge by Slingby's chimney which is a grade II and gives you quick and easy access to the ridge without having to make the long and exposed traverse onto the first platform. As we arrived at the foot of the chimney it became very obvious that we needed to change our plans. The wind had now picked up and the snow had built at the bottom of the chimney and was only getting more loaded with each wave of snow coming down. We had a quick discussion and decided to run away and go and do a shorter route lower down on the mountain.
We ended up on Faulty Towers on the west flank of Tower ridge and even here the conditions were still pretty full on. This area was again a popular choice for a lot of people given the conditions. 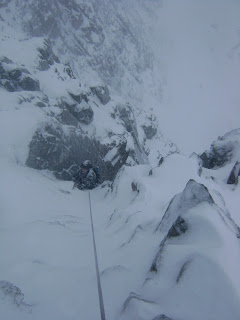 Nearing the top of Faulty Towers, the picture really doesn't do justice as to how wild it was.
Yesterday morning I woke up to look out the window only to find it was still snowing heavily. Given this we decided on a short route low down again so we went to Far Eastern Buttress in Glen Coe. The guide book describes this crag as a good option when the higher crags are buried, unfortunately it doesn't recommend where to go when this crag is buried. It took us just under two hours to reach the foot of the crag and that was only because a pair in front of us had kindly broken trail most of the way. We started up the first pitch of Eastern slant which gave a great little pitch at about III,4 but with everything buried gear was at a minimum. As I pulled out of the gully onto the easier angled part of the Buttress I realised just how much snow there was as pitch two of Orient Express was no longer there. It was buried under about six foot of snow. We swam up this for 20m and then slinked off right up some easier ground at about grade III. Two hours of swimming back down hill and we were back at the car just in time for Simon to listen to the rugby on his drive home. I forgot my camera so no photos but Stob Coire nan Lochan is looking white. The only real problem at the moment is getting to the crags.

Things are due to warm up slightly over the next few days so hopefully that will firm up some of the snow that is around. Hopefully not too much though as the mixed climbing is looking great again.
Posted by Scott Kirkhope at 07:29