A breif return to winter. 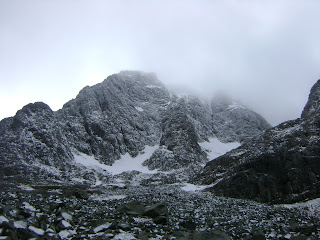 Looking up at Observatory gully.
After the warm weekend the temperature has dropped and we have had some showers falling as snow over the tops. As climbing was out I thought I would take a wonder up to the Ben this afternoon. There was fresh snow down to just above the CIC hut and the highest crags looked wintery again. Most of the ice has gone. 0.5, Hadrians and zero have vanished. There is no ice at all on the orion face. Observatory ridge is clear of snow most of the way (once this bit of fresh stuff has gone). Tower Ridge is rock up until the eastern trav. In Coire na ciste the easier gully's remain and there looked to be some ice in central gully right hand. I only saw four other people out today but I saw no one on any of the routes. 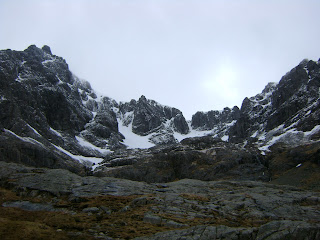