Yesterday I was working for West Coast Mountain guides and spent the day with Julia and Chris. Both of them have done a lot of easy scrambling in the Lakes and North Wales but nothing in Scotland. Neither of them had been up the Ben either and wanted and adventurous way up to avoid the crowds. So we headed for Tower ridge. We made quick progress up to the little tower were I stepped of the rope and gave them an opportunity to do a couple of quick easy pitches of climbing and the chance to look and some simple scrambling techniques they might use to look after themselves. 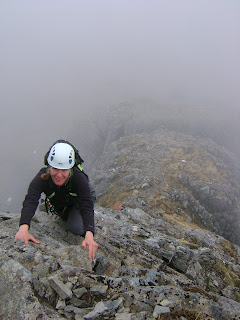 Julia leading a pitch on the Little tower.
Once over the little tower we headed on up to the Great tower and the Eastern traverse. This is now free of snow on the traverse, although there is still snow in the cave it can still be climbed without winter kit or if you want avoid it on the left. A couple of pitches later and we're stood on top of the Great tower just as the cloud starts to lift. We made it across the gap and then very quickly made to the exit gully just below the plateau. This still has some snow and ice in it but all of this can be avoided by climbing the rib on the right.
We joined the masses to walk over to the summit for a bite to eat and then descended via the tourist path. 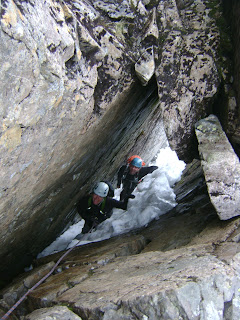 The cave pitch at the end of the Eastern traverse.
Posted by Scott Kirkhope at 03:12