Day 1 of two today working with Alan for Mountain Plan. Alan had been on Islay for a few days and wanted to get some climbing in and look at improving his overall skills base. The weather wasn't looking favourable and the driest area was the South-west away from the mountains so we headed to Knapdale crag near Lochgilphead. I had heard a lot of good things about this crag and some of the routes looked fantastic on beautiful clean, rough rock. Unfortunately the routes in the lower grades weren't as clean. 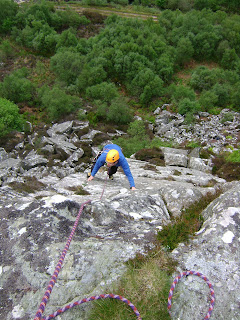 Alan on our first route of the day.
So with the rock still feeling a little greasy from the last shower we went up a slabby route on the left side of the crag and looked at building belays and rope work. At the top the cloud had cleared and the rock had dried so we headed to the opposite side of the crag so Alan could have a go at leading some easier routes and some coaching. It took us nearly half an hour to walk from one side of the crag to the other only to find some well protected but not the cleanest routes.
Alan led a couple of routes and did very well with taking on board what we had covered earlier. We had now ran out of routes at the right grade that looked climbable. So instead of descending back to the bottom of the crag and taking forever to cross the wet, greasy boulder field I put a top rope on some of the routes so Alan could get a bit more millage. 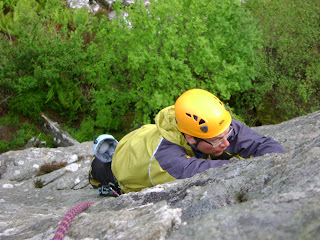 Alan climbing Pocketed wall.
This is a good little crag to spend a day at if your out with a mate with a hand full of good routes up to E2. The only real issue is access to the routes which is difficult to say the least. There had been some showers passing during the day but not enough to stop us climbing.
Posted by Scott Kirkhope at 03:30