The classic course that I have been instructing over the last three weeks came to an end today and the group left this morning. It was a busy week for them as they had their final expedition from Monday to Thursday. They did well and thankfully had a dry expedition, walking from Kinlochleven to Corrour station up to Lariag Leagach bothy then onto the water of Nevis and finished with a jump into the Nevis. So over the week I have been checking on them to make sure that they were ok, other than that they were on their own.
On Wednesday I also had a days work for West Coast Mountain Guides. Myself and Dan, Max, Jamie, Isi and a couple more instructors were guiding parties from a organised Harry Potter tour up to Steall.
Posted by Scott Kirkhope at 08:58 No comments:

Gorging in the Glen. 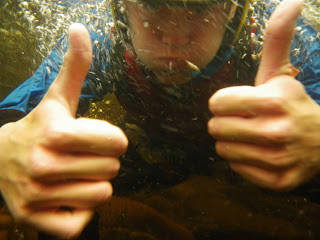 The weather in Fort William has been good over the last couple of days with glorious sunshine in the morning but it has clouded over in the afternoon with some showers. The group at Outward Bound are coming on well and are almost ready for their final unaccompanied Exped which starts on Monday. So to break to the course we went gorging yesterday in Scimitar gorge in Glen Nevis. A great little gorge with some big jumps and because the air temp was so high we were able to stay in the gorge for a while. 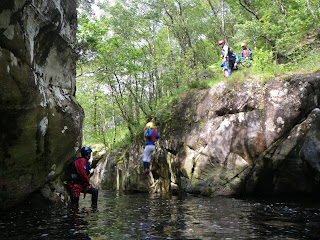 Posted by Scott Kirkhope at 13:06 No comments:

The Grey Corries and the Aonachs.

The first full view of our planned route.
So it was the groups second expedition over the last three days and this time it was in the mountains. We set the bar high and decided to see if we could traverse all of the peaks on this long and spectacular range. We set off late Saturday morning in what can only be described as uncomfortable heat, especially when you're carrying an exped pack. We made slow but steady progress up to Stob Coire Gaibhre from there we could finally see our whole objective laid out before us and it looked big. By now it was evening and the temp had dropped so the climb up to Stob Choire Claurigh and Stob a'Choire Leith were much more comfortable. We decided to drop off the ridge her to camp next to a lochain on the South side of the ridge which was a beautiful spot with stunning views towards the Buachille. 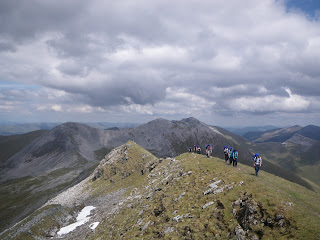 The group arriving at Sgurr Choinnich Mor.
Day 2 and we had a lot to get done We continued west ticking off the rest of the Peaks and descended to the Bealach between Aonach Beag and Sgurr Choinnich Beag. Here the group decided to continue and try to get all of the peaks in even though it was now 4 o'clock and they were tired. We made the steep climb up to Stob Coire Bhealaich and then carried on to the summit of Aonach Beag. A long and hard day for the group and they did well to keep going. We camped at the Bealach leaving us only Aonach Mor to tick off this morning on our way out to Nevis range. 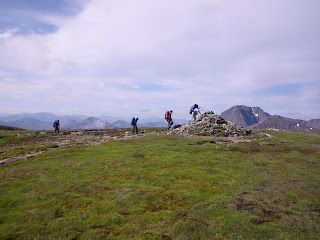 The summit of Aonach Mor and our final one.
Posted by Scott Kirkhope at 09:39 No comments: 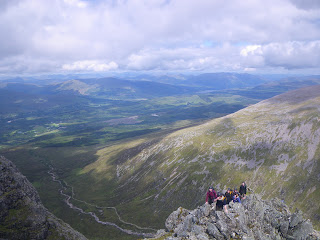 So I'm at the end of the first week of the Outward Bound classic course and today we were up Ledge route on the Ben in fantastic conditions. The group made speedy progress up to the CIC and the cloud started to clear as we loaded up on water and started making our way up to Coire na Ciste. From here we traversed right above Moonlight gully buttress across No.5 gully to the perched block. This is a nice way onto ledge route and avoids the wet slabs and the loose gully.
We had some lunch in the sun and continued up the route to the plateau. The group had made quick enough progress that we had time to join the mass' on the summit and then headed down the Tourist path to the top car park. 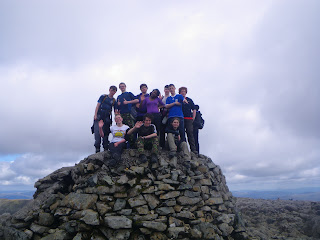 Off on a three day exped tomorrow and hopefully we'll traverse the Grey Corries and if we're going well, we'll go for the Aonachs too.
Posted by Scott Kirkhope at 12:49 No comments: