The veiw from the top of the Coolidge couloir, just below the summit. 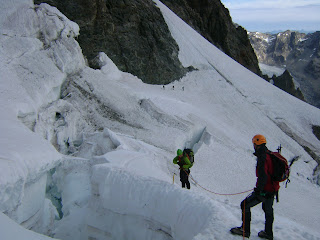 Descending down the Violettes Glacier.
So summer in Scotland this year hasn't been horrific but not the best either so Ken and I have been looking foreword to this trip for a while. We both finished work on the Monday evening and finished packing and jumped into the van for the long drive to Ailefroide. We arrived late on the Tuesday night and got a fresh start on the Wednesday. I could talk you through the whole trip but I would be here forever and I'm not sure most of you would bother reading on. 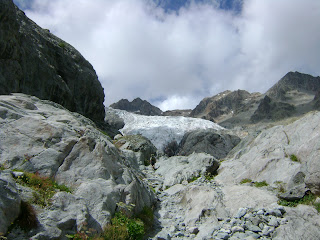 The approach to the Glacier Blanc hut. 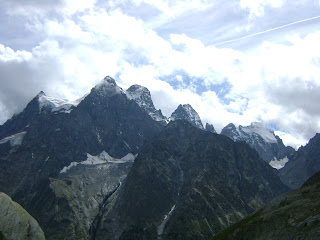 Mont Pelvoux from the Glacier Blanc hut.
So we spent about a week and a half based in Ailefroide and did a number of great rock routes in the valley and also managed a trav. of Mont Pelvoux which for PD takes you through some impressive scenery although the descent is knee breaking back to the valley. We also did a rock route on Pic de Glacier Blanc called Le Communard which was fantastic if a little bit tedious through the easy ground in the middle of the route, spending most of your time looking for the next bolt rather than climbing. 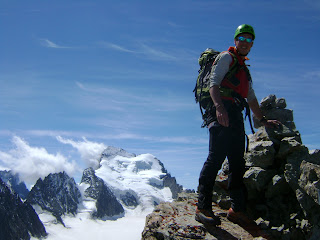 Ken on top of the Pic du Glacier Blanc with the Barre des Ecrin in the background.
After Ailefroide we had planned to go round to La Berarde but with the power of technology we found out that people had been doing some routes on the North face of La Meije. So we headed round to La Grave and caught the Telepherique up and approached via the a very interesting Facile. The bivi was in a fantastic place with awesome views of the face. During the evening and night the sound of Serac and rock fall was all around us but we kept our fingers crossed for colder temps over night. At 4am we left the bivi and all was quiet but it soon became obvious that things hadn't cooled down enough. Unfortunately after Ken fell through a thankfully very small snow bridge we called it a day as we still had far more complex ground to cross so we headed back to the bivi for a cup of tea and watch the sun rise. 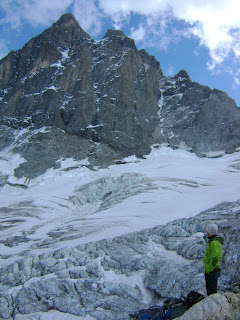 The veiw from the bivi at the foot of La Meije.
We carried on round to La Berarde and bagged a route in in the valley and then headed up to the Soreiller hut to tackle the Voie Madier on the Aiguille Dibona. This is a fantastic route and my favourite of the trip, 400m of clean Granite and it turned out to be bolted for most of the way. After that we headed down to Bourg d'oisans and bagged another route the next day. Unfortunately the weather was set to change so we decided to head home early and break the drive home up. 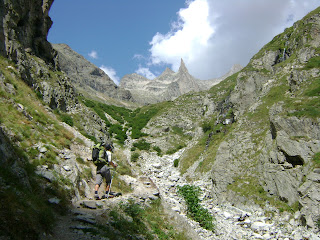 Our first veiw of the Aiguille Dibona. 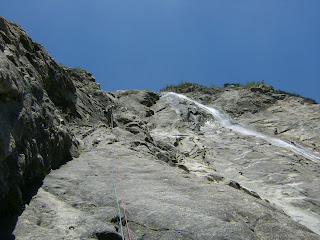 Abseil no2 I think, on the Cascade de Villard.
All in all a good trip with some fantastic climbing in a beautful part of the Alps but it is good to be back.
Posted by Scott Kirkhope at 12:30