This weekend I was working on a 3 peaks challenge for Maximum Adventure. I met my nice small group of 4 on the Friday night and gave them a brief for what looked to be a wild weekend ahead. Saturday morning we set off up the Ben in heavy rain and strong winds but the team still managed a good time of 5 hours and 15 mins. Off to Scafell Pike and despite the dark and rain again we were back at the van after 3 hours and 45 mins. Snowdon was again wet, in fact very wet and we put in a good time again to come in just under the 24 hour mark.
Posted by Scott Kirkhope at 11:53 No comments:

I've been shadowing a Summer ML this week run by Bill Strachan of Scotch on the rocks. The course has been based out of the UHI campus in Fort William. It has been an interesting week of weather and learning. The weather was wild for most of the week with strong winds and heavy rain/snow. It was good for me to watch some other MI's as in this profession you quite often find yourself working alone and there were plenty of tips for me to pick up with Sandy Paterson, Mike Pescod and Ben Wallace also working during the week. Despite the weather a lot of learning for the group in terms of navigation, steep ground, rope work and river crossings along with so many other areas. No photo's I'm afraid as the forecast for the first three days was so wild I didn't want to break the camera and when there was a better forecast I forgot it.
Posted by Scott Kirkhope at 03:39 No comments:

Wet on the Ben.

I was working for Ptarmigan events today with a very large group on the Ben. The weather was fowl and everyone did well to cope with it and maintain their enthusiasm. Out of a 100 participants 94 made it to the top and back down again and raised lots of money for Kidney research.
Posted by Scott Kirkhope at 11:07 No comments:

Autumn can be a difficult time of year in Fort William. The summer seems like a distant memory and the winter hasn't yet arrived, so keeping the fitness up and maintaining the enthusiasm to go outside whilst the wind is howling and the rain is hammering down can be difficult. So this year I decided to enter the Scottish Tooling Series for a bit of fun and for some winter training. I had a great day thanks to the welcoming nature of the regulars that attend the series and had plenty of opportunities to learn new things. I might of got a bit over excited once I had finished the three routes in the Ice wall and tired myself out too quickly but the banter amongst the entrants was enough to make up for it.

Posted by Scott Kirkhope at 10:53 No comments:

So with the forecast for the West a bit rubbish again Ken and I decided to take a long drive over to Newtyle Quarry near Dunkeld for a bit of winter prep. This quarry is a strange venue, firstly being slate which is unusual for Scotland but also has trad, sport and aid routes there as well as dry tooling. Once we'd found the place we decided to head for the easier lines for a bit of a warm up and neither of us had actually lead a tooling route outside so we didn't want to bite off more than we could chew. 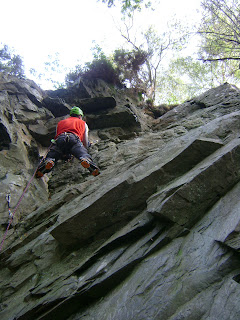 We spent the rest of the day leading and top roping some of the routes and getting used to the feel of axes and crampons on rock again. A word of warning though, some of the rock on the doorjam slab area is very suspect. As you would expect for a quarry but a reasonable sized block just spontaneously came off whilst we were coiling the ropes at the end of the day. Thankfully missing both of us.
Posted by Scott Kirkhope at 12:02 No comments:

So the new SMC guide to Skye is in the shops and I received a phone call from a mate the other day to give me some good news. Both of us have a photo in the new guide and neither of us new about it until he got his hands on a copy. See the photos below. Having now had a flick through the guide I can say it is fantastic. The SMC with Mike Lates have done it again. Lots of great photo topos and inspiring shots and now a complete and up to date guide including the more recent harder mixed lines in the area. I can't wait for the winter now, to give some of these routes a shot. 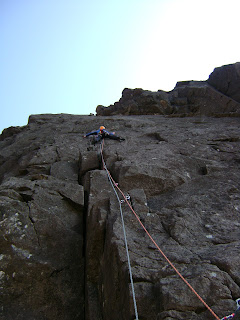 Myself on Vulcan wall. 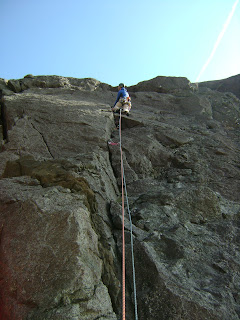 Alex on Stormy Petrel.
Posted by Scott Kirkhope at 11:12 No comments: