As anyone who visits this blog, or any blog of anyone living in Scotland knows that the summer has been a bit of a let down in terms of dry rock. So when Al gave me a text yesterday looking for a partner I was keen to say the least. We packed the car and got a reasonably early start to make the most of the daylight. Arriving at the crag it was clear there were still quite a few wet streaks about (not surprising really). So we decided to warm up on Vulcan. A nice two pitch VS which took us upto the upper tier. Al then lead on up through a groove which he hadn't climbed before but was interesting at S 4b and took us to the top. 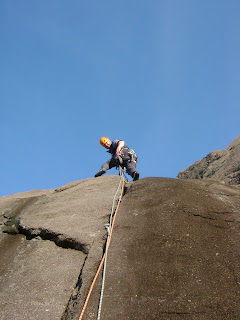 Al reaching a good rest after the tech crux of Dead ringer.
Back at the bottom of the crag and it was now midday and alot of the streaks had disappeared so we headed on up Dead ringer(E1 5b) which was nice and balancy on the first pitch followed by some bold slab climbing on the second pitch.
We decided to finish the day off with 'Ring of fire' that Al had pointed me at and it was a nice route but felt more like HVS 5b rather than 5a. A nice day to be out on the rock and in such a beautiful setting. 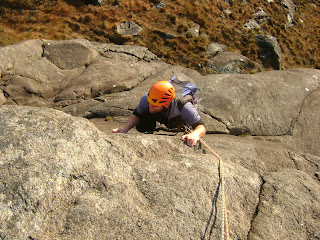 Al pulling through the crux of Ring of fire
Posted by Scott Kirkhope at 12:02