John arrived at mine late last night (late for me any way) so we opted on a later start and a shorter day because there was still a lot of unconsolidated snow higher on the mountain. So at the CIC we had a discussion about what to do and we had friends that had done Fat Boy Slim over the last couple of weeks and they had said it was at least worth a look. So off we headed avoiding a couple of patches of windslab on the way up and geared up before we went up the steeper grade 1 ground to the bottom of the route. 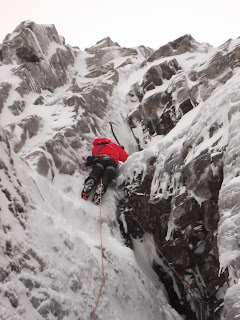 John on the crux pitch.
It's a nice route and definitely worth doing if you are in that neck of the woods but it is just a one pitch wonder really. We abseiled back down 1934 and back to the bags. Good frozen turf at this level and with some helpful ice in places but cruddy in others. A couple of teams out today with routes on Douglas boulder seeing the most traffic, probably because it requires less trail breaking. There was a team up under Slingsby's chimney but I didn't see were they went and one team braved the walk up to Gargoyle wall but said the cracks on the first pitch where heavily iced so they changed their mind and went for Lost the place. 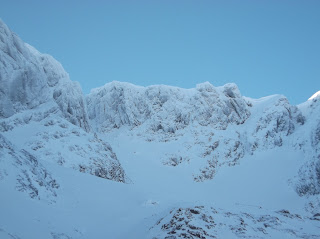 Looking into the Ciste.
The snow is still largely unconsolidated on the higher part of the mountain with pockets of windslab around even at around 800m. More heavy snow forecast tonight and tomorrow before a slight thaw and cold again on Tuesday before the weather really turns on Wednesday. 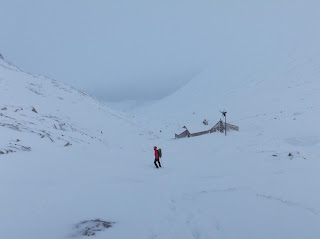 A very wintery scene at the CIC.
Posted by Scott Kirkhope at 11:40