With a good forecast today and more snow forecast for tonight Ken and I decided to take a walk up to the Ben. There was a faint track heading up from the bottom car park but it wasn't long before we were breaking trail through deep snow. It took us 2 1/2 hours to get to the CIC hut and from here we could see that the routes high up on the mountain looked in brilliant condition but getting there was going to be the issue. We made a decision to head toward Moonlight gully Buttress but very quickly changed that to Douglas Boulder due to the depth of the snow. 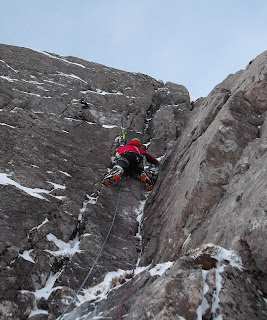 Ken on the Main pitch of Jacknife.
Both of us have done a couple of routes here but neither of us had done Jacknife (V,6) before so it was decided. This is a short route and only really had one pitch of worth but a good one at that. The exposed turf is frozen but on the larger ledges the snow has insulated it. There were only two other teams out today with one team on Cutlass and the other headed round towards the area of Fat Boy Slim but didn't actually see were they went. 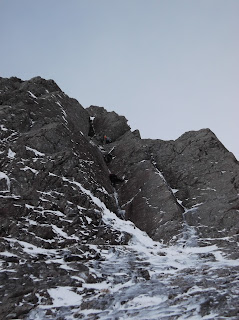 The team on Cutlass.
There is now a trench up to the CIC but it is snowing heavily again in Fort William as I write this so I don't think it'll be there for long. Might head East tomorrow but we'll have to wait and see what the roads are like in the morning. 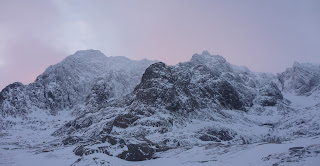