With a nice forecast today after the wild weather of the last few days Ken and I were keen to get out. The snow high up on the Ben didn't really have a chance to consolidate over the last couple of days but the conditions lower down on the mountain are much improved and with a really good cover of snow above 500m we decided to stay low again. We decided on Route I Direct (VI,6), which turned out to be in brilliant condition. A lot of the cracks were full of ice so gear needed some digging out but this ice was also very helpful giving first time placements and good, secure hooks. The guide book breaks this route down into 8 pitches but we did it in 4 and had no problems. All 4 pitches gave some fantastic climbing with every pitch having at least one move of tech 6. 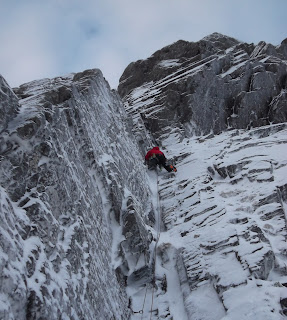 Ken on Pitch 1.
The conditions on the mountain are shaping up well. The amount of snow cover for this time of year is fantastic. Ice is starting to form in most places on the mountain with routes like Vanishing gully, Italian climb and the CIC cascades filling in nicely. The mixed routes are still in great 'nick' too with frozen turf and a good covering of rime and helpful neve. Snow conditions on the ground are variable. There is a hard crust to the snow on the lower part of the mountain which at times does break through making for harder going. As for higher up the mountain, I haven't been there myself but I would guess there is still a lot of unconsolidated snow lying around. It was quiet today with a couple of teams going up Ledge Route and a group doing winter skills. Other than that we saw no-one else really. The closure of the A82 this weekend probably has something to do with it. 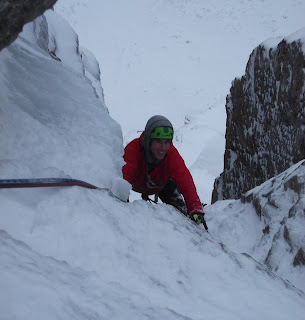 The smile on his face says it all.
Posted by Scott Kirkhope at 10:33