Shame it isn't going to last.

Day 3 of working for West Coast Mountain Guides and after having spent the last two days making the best of the weather, today we were keen to get out into the snow and do some climbing. Both of the guys were chomping at the bit to get on the sharp end and put some learning into practise. We headed up to Stob Coire Nan Lochain to see what was about for us to do. 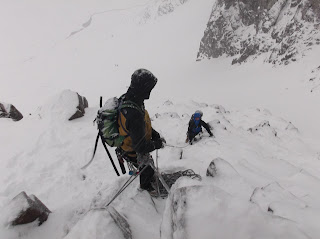 Arriving in the Corrie we saw a couple of teams high up on Dorsal Arete and that was it. So we made are way up to the start of the climb and both Graham and Richard did well. Four pitches later they had climbed the whole route by themselves with me just soloing along side. The conditions did worsen as the day went on and a lot of snow fell. The forecasted temperature rise was definitely happening as the snow in the bottom of the corrie was wet on our way back down. 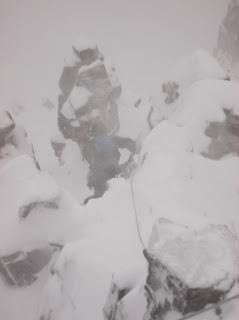 It got a bit wild later on.
Other teams out on Ordinary route, Original summer route, NC gully and one brave team went up Broad gully. There was wind slab around today but the strong winds of yesterday meant that moving around was fairly easy as there were either very deep areas of snow or a shallow layer of fresh stuff on the firm old snow. All set to change again with warmer temps and rain overnight and into tomorrow. As I write this the Aonach Mor summit weather station is reading 3.8 degrees.
Posted by Scott Kirkhope at 12:29