First days of winter work this weekend and today was always going to be an interesting day judging by the forecast. We were looking for somewhere to do some skills and get out of the wind. There has been a lot of fresh snow on the West coast over the last week so I was expecting to spend the weekend swimming. Last night though the freezing level went up to about 1300m and dropped again early this morning so I was hoping we might find some firm snow. There is a lot of old snow still around but it hasn't really frozen solid yet and was more like it had a rain crust. 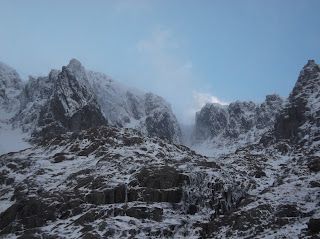 Coire na Ciste
We headed up into Coire na Ciste to see what we could find and managed to cover a few things despite the conditions. There was alot of fresh snow been blown around today and large areas of soft wind slab was forming below the Trident buttress', there was also evidence of an avalanche here and under No.3 gully. The exposed turf at this level was frozen and there was a good amount of icing going on too. The freeze-thaw lines such as Mega route X and the Shroud were visible but still a long way off being climbable. The higher buttress' were white and there was a couple of teams on No.3 gully Buttress and a team on Trident buttress climbing the Minge, I think. 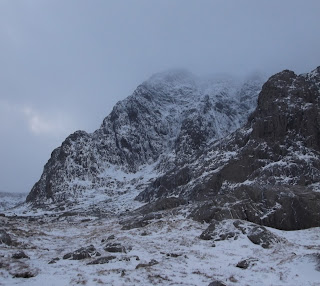 NE Buttress and the Orion face.
Tomorrow is set to be a better day in terms of the wind but tomorrow night and Monday heavy snow is forecast only adding to the fresh snow that is already there. Getting to the routes may well be the most difficult part of the day. There is no Avalanche forecast at the moment so remember to pay attention to the weather forecasts and keep an eye out for what is going on around you.
Posted by Scott Kirkhope at 09:42