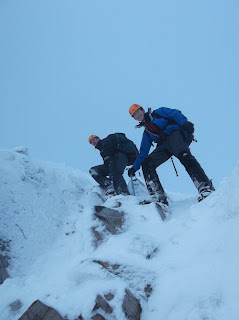 Descending the rocky step just below the summit.
I was out with a group today from West Coast Mountain Guides who wanted a day of basic skills and to try and get a peak in. We opted for Stob Ban from Glen Nevis and with the snow level reasonably low it wasn't long before we were starting to look at how to move around on the snow. We carried on up to the head of the glen and found a good area to look at Ice Axe arrest and then carried on to the summit from there, putting the crampons on not far after the bealach. The conditions are good at the moment for looking at moving around in the mountains and avoiding areas that might be an issue and looking at the snow pack too. The snow is starting to show some signs of consolidation at about 900-1000m with an icy crust but there are still weak layers within the snow pack that would be of concern on steeper ground on N-E aspects and a couple of pockets in other places. 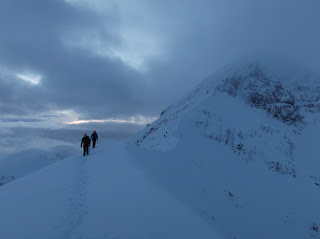 You can see the amount of snow on the slopes on the right. 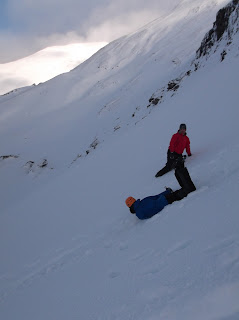