So the weather over the last few days have been fantastic in Lochaber. Good hard frosts and mostly sunny. Unfortunately I had other commitments but I was back at work today. Lots of people have been out climbing over the last few days and I'm sure you've seen it on other peoples blogs so I won't give you a run down. Fair to say though that people have been reporting good conditions if a little thin in some places.
Today I was working with David who is doing a winter 3 peaks and it was definitely winter today, it was freezing in the Glen when we set of this morning and only got colder as the wind started to pick up but the sun was shining for most of the day and we got some fantastic views today. I had a few peeks over to the North face and saw teams on Tower ridge, Combe gully, No.2 gully and Max popped up onto the plateau from Smith's route just as i was taking some photos of Indicator wall. Looks like conditions are set to stay this way for a couple more days, though with more cloud and some precipitation which should rime up some of the higher mixed routes. 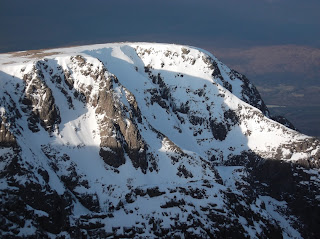 The Great tower (with a team at the gap), South Trident Buttress and Ledge route. 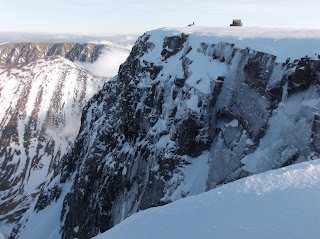 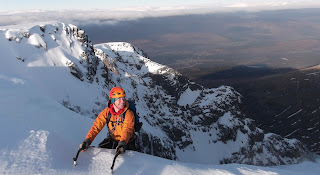 Max just popping onto the Plateau from Smith's route.
Posted by Scott Kirkhope at 10:21