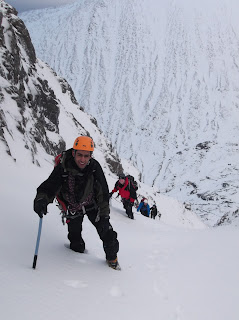 Day 4 of the Abacus Mountain Guides Winter Mountaineering Course and today always looked to be the best day of the week on paper and it was. A nice cold day with very little precipitation and the wind wasn't as bad as the forecast had suggested again. We had decided today we would make best use of this and go and do a classic mountaineering route. We headed up to Ledge route followed by a couple of other teams who we kindly let past. More so they could put a staircase in for us and make our day a little easier. We followed their steps up the route with the guys moving together as a team of three for most of the route. They did well and the big grins on their faces as we topped out said a lot. A good day to be out in the mountains today and it seems like such a long time since we have had one. 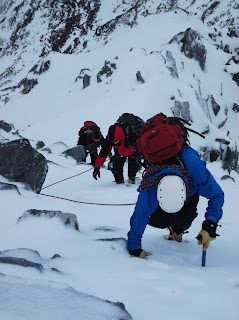 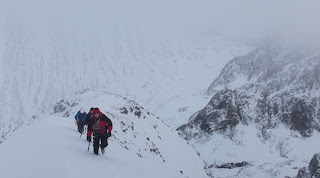 Mixed conditions on the mountain looked great today. Frozen turf and a good covering of Rime. Not many people ventured into Coire na Ciste but a couple of teams did routes on Number 3 gully buttress and lower down the Douglas boulder was busy. Ice is starting to form very quickly on the larger drainage lines with the Curtain and the Shroud looking white but not there yet. Higher up the cascades next to No. 2 gully were there and Glover's chimney looked like it was reasonably well formed. I didn't get a look into Observatory gully and Indicator wall but by the look of the Orion and Minus faces very little ice has formed here with just lots of snow on the ledges but I could be wrong. 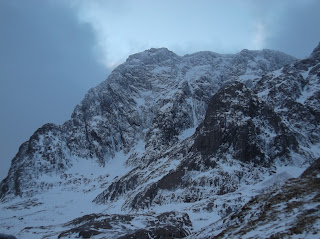 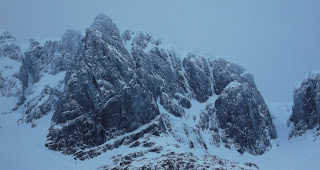 All set to change again tomorrow with freezing levels forecast at 2000m. In the long run though there is loads of snow on the mountain and I think very little damage will be done by the rain and the moisture will only help the ice.
Posted by Scott Kirkhope at 13:41