I'm out with Rory and James this weekend for Abacus Mountain Guides and they were heading up from Edinburgh this morning so we decided to meet at Creag Meagaidh. Mike had been on the Pumpkin yesterday and had reported that it was a bit damp but still there so me made our way up to the Inner coire. We had the Inner coire to ourselves and there were only a couple of other teams visible which I found surprising given reports on UKC. The first pitch was pretty damp and sugary and not brilliant for screws but axe placements were ok once you'd done some digging. The ice did improve with height but the upper part of the route is almost snow free but on good frozen turf. The freezing level is due to drop tonight to about 900m which will help to improve the ice but it does need some new snow. Other teams were on Staghorn gully and one team headed up Reaburn's but I didn't see where they went. 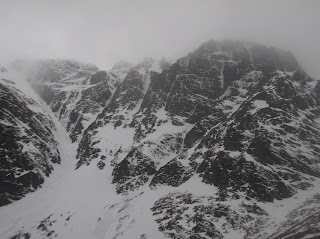 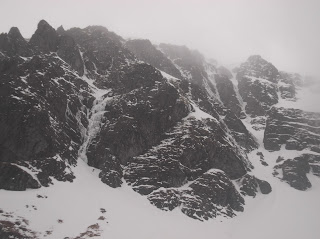 The inner coire with Pumpkin on the left and the Wand and Diadem on the right. 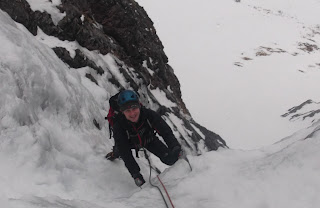 James after the crux. 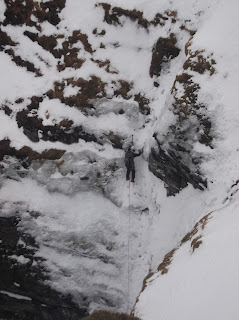 A team on the crux of Staghorn gully.
Posted by Scott Kirkhope at 11:46