With a good forecast for yesterday and a strong group from Outward Bound we decided to take the group up Ledge route for their expedition. We walked from the top car park and made our way to below Carn Dearg Buttress where we set up camp and dropped off any kit we weren't going to need for the route. We made our way up over the top of Moonlight Gully Buttress and traversed across No.5 gully and made our way to the top. The group did well and we topped out two and a half hours after we left the tents. The cloud and rain then came in but this didn't dampen the groups spirits and we headed onto the summit and then down towards the abseil posts and descended into Coire Leis. Back to the tents for dinner and an early night to escape the rain. This morning we just had a lazy morning, packed up and walked back out. A great effort from the group of 12-13 year olds and a trip I don't think they will forget that quickly.
Posted by Scott Kirkhope at 10:29 No comments:

I've been back on Skye again for Skye Guides over the last couple of days. Friday I headed out with Sam and Gordon and with the weather set to improve as the day went on we had a later start and headed straight up to the In Pinn. It was still covered in cloud and quite gusty as we set off up but the wind did start to drop and the cloud started to lift. We then headed round An Stac and climbed Sgurr Mhic Choinnich and at this point the cloud lifted to reveal the whole ridge and the first time Sam and Gordon had been on the ridge and been able to see it all.
Yesterday I was working with James Edwards and a group of seven friends who were out to get the Northern three munros. We made our way in as a group and then split and went our separate ways. We did Am Basteir first and then Sgurr nan Gillean and then dropped round to walk up to Brauch na Frithe. We descended the North West ridge in very think cloud that didn't break until we were almost back at the Slig Hotel. I've got a few days at Outward Bound this week and then heading to the Alps for some fun.
Posted by Scott Kirkhope at 06:43 No comments:

I was working for Skye guides yesterday with a group from The Rock Trust which is an Edinburgh based charity for homeless young people. The plan was to climb all of the Munros in the Black Cuillin over the weekend. Whilst Gillian went to the Northern end to tick of the three there Mike headed to the Southern end to spend the night on the ridge and will be finishing off the rest today. I went to go and tick off Bla Bheinn with a group of four. We took the easiest way up the mountain as for some this was their first Munro. My first time on Bla Bheinn and it is a fantastic place along with Clach Glas and I'll definitely be going back to have an explore on some of the routes there.
Posted by Scott Kirkhope at 01:44 No comments:

Email ThisBlogThis!Share to TwitterShare to FacebookShare to Pinterest
Labels: Skye

The Sun keeps shining on Skye.

Home from a nother couple of days on Skye again working for Skye guides. The weather up there is holding out whilst everywhere else seems to be wet. On Sunday I was out with Jakob and Abby who are over from the States for a week and wanted to sample some of the ridge which they had heard so much about. So we headed up to An Dorus and then South along the ridge to Banachdich. The ridge was in cloud but it stayed dry for us. 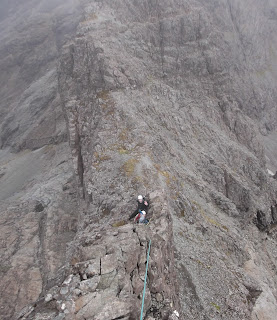 Cathy and Billy 'enjoying' the exposure of the In Pinn.
Monday and Tuesday and I was out with Cathy and Billy who were set to tick off a couple more Munros. We headed up the An Stac screes and took in Mhic Choinnich and then along to the In Pinn. Tuesday and it was back up to An Dorus to take in the Munros either side and to have a shorter day. We walked out bathed in Sunshine and with brilliant clear views out West.
Posted by Scott Kirkhope at 01:11 No comments:

Busy week on Skye for the Bank holiday.

After finishing at Outward Bound at 3.30pm last Friday I met up with Rich to help him out for the evening on an SPA ass then packed my car for an early start to Skye on the Saturday morning. I have been working for Skye Guides this last week and Saturday I picked up Simon in Broadford and we made our way round to the Glen Brittle campsite. We headed up the Sgumain stone shoot and over the summit where we bumped into Tony, Dave and Lisa who where having an interesting traverse. We carried on over Sgurr Alasdair and headed North to Sgurr Mhic Choinnich and down the An Stac screes. Sunday we headed up to An Dorus and took in Sgurr a' Mhadaidh and the over Sgurr a' Ghreadaidh and onto Sgurr Banachdich.

Simon on Hart's ledge.
Day 3 and I was with Dave today who wanted to be a more independent scrambler so we headed up Pinnacle ridge and had a look at route finding using the guide book and abseiling and then carried onto Gillean and down it's very busy West ridge. 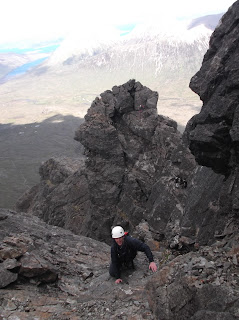 Dave enjoying the great scrambling up onto Knights peak.
The next two days and I was out with the Cook family and Grandad. Their big ambition was to climb the Inn Pinn. So I made two trips up the Pinn and at one point we had three generations of the family sat on the summit. My second day with the Cooks and they wanted to tick off the southern Munros so we headed up Sgurr nan Eag but the guys had tired legs and a quick burst of cramp meant we called it a day there and headed back down. 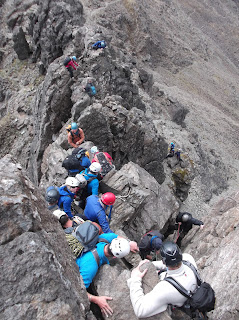 Busy on Gillean's West ridge. Strangely no one was using the usual ab station. So we had it.
Final day and it was back to the southern end but With Dan and Dawn today who had been out with Matt for the rest of the week and just had the Southern three to get. So we made quick time into the coire and took in Sgurr nan Eag, Sgurr Dubh an da Beinn, Sgurr Dubh Mor, Sgurr Alasdair and Sgurr Sgumain and descended down the Sgumain stone shoot. Another fantastic week of weather on Skye, I only had to put waterproofs on for an hour in the whole week. Back at home for a couple of days of rest then back up to Skye on Sunday.
Posted by Scott Kirkhope at 02:26 No comments: