The group heading upto Na Gruagaichean.
I'm in the middle of instructing a 3 week Classic Course at the moment at Loch Eil Outward Bound. It started last Saturday and so far the group has been on a 2 day canoe exped up the Great Glen, Sea Kayaking out by Arasaig and a day of climbing and abseiling in Glen Nevis. Over the last three days we have been on our training mountain expedition in some pretty mixed weather. We started in Kinlochleven and walked up to Coire na Lochain at the Eastern end of the Mamores. On day two we headed up onto the ridge and made our way West along the ridge to camp just below Stob Ban. Yesterday we carried on along the ridge and descended to the visitor centre in Glen Nevis. The group have their solo and a day of Gorge walking left before they head off on their final unaccompanied four day expedition.

Looking North toward Sgurr a Mhaim and Ben Nevis.
Posted by Scott Kirkhope at 00:14 No comments:

Just returned home from a pretty successful trip to the Alps with Ken. We headed out to Chamonix at the start of the month and arrived to some pretty mixed weather, it remained mixed for most of the trip but with plenty of two day weather windows which allowed us to still get out and complete some classics.
First trip up was to do the Frendo Spur followed quickly with an ascent of the Chere couloir which we followed to the top of Mont Blanc du Tacul which I highly recommend rather than abseiling off after the difficulties. Another couple of days sat around waiting for the rain to stop and then we headed up on the Midi with the plan of doing the North Face of the Tour Rhonde but it was catching too much sun for our liking so we just continued on up to the La Fourche bivi hut. From here we climbed the Kuffner Arete the next day and topped out into some truly Scottish weather so decided not to go to the summit of Mont Maudit and escaped early down the North slopes to Col Maudit. 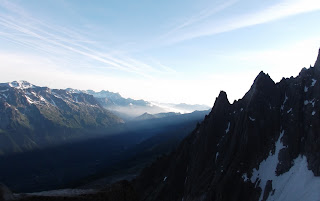 Morning sun over Chamonix from the Frendo Spur. 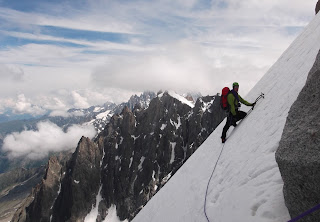 Ken on the upper snow slopes of the Frendo.
The next trip up and with a lot of fresh snow we decided to go cragging on the Aiguilles Rouge and ticked off the Classic Chapelle de la Gliere. A fantastic alpine rock route at about VS mostly protected with pegs but still requiring a small trad rack. The weather set in again and we waited for the next window which came just in time before we had to head home. We headed up to the Albert Premier Hut and headed for the Migot Spur on the Aiguille du Chardonnet. Another classic and with quite a wintry feel given the current conditions.
Another great trip and reasonably successful given the mixed weather that the Mont Blanc Massif having been getting recently. 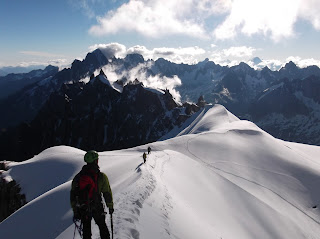 Looking down the Arete from the Midi. 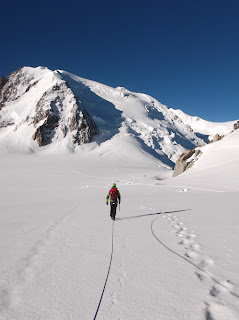 The approach to the Tacul triangle across Col Midi. 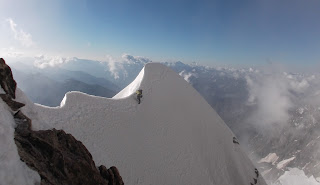 A soloist on the Kuffner Arete. 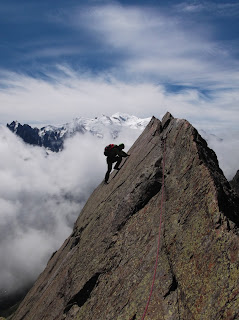 The very photogenic arete on the Chapelle de la Gliere with the Mont Blanc Massif behind. 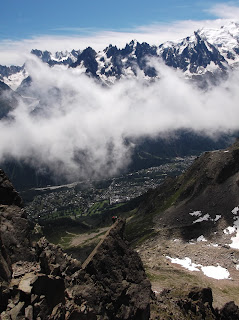 The team behind tackling the Arete. 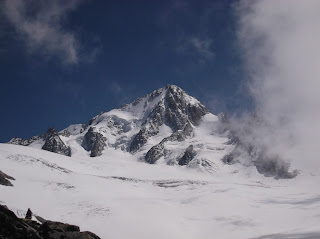 The Aig. du Chardonnet with the Migot Spur dropping straight down from the summit.
Posted by Scott Kirkhope at 01:01 No comments: