Cobbler conditions got the better of us.

With very deep accumulations of snow in the Mountains and a better forecast further South, Ben and I headed to the Cobbler hoping that we wouldn't have to do too much wading to get to a route. The lower path was icy but we were soon out of the trees and looking at a nice white Cobbler and with a set of tracks to follow it was all looking good.

Our first full view of the Cobbler in the Morning.

We decided to head for Recess route as it was catching some sun which felt more appealing than hanging around in the shade on North Wall Groove with strong Northerly winds forecast. We made it to the path junction in about an hour and a half and turned off to make a new track into the corrie. An hour and a half later we still weren't at the bottom of the route and were now waist deep in wet snow and our chosen route was now stripping quickly as the sun got higher in the sky. North Wall Groove now looked appealing but after some thought we estimated it was probably going to take us another hour or so just to get across the coire which meant we were looking at starting the route at about 1pm. 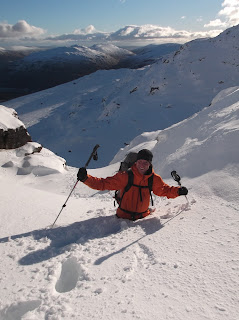 A bit of a swim to get there. 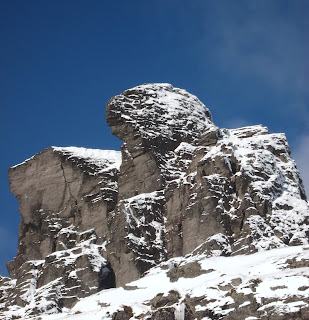 Stripping fast in the sun. You can just make out someone on the steep bottom wall. 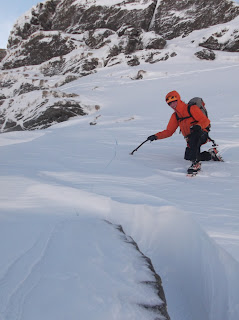 A crack that has appeared on a freshly formed cornice probably due to the rise in temp. 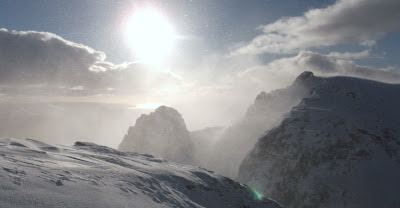 Looking across the Central and South peaks in deteriorating weather.

A bite to eat and we just decided to see if we could get a quick easier consolation route in but just ended up climbing some grade II ground to get to the top of the North Summit which is about where the freezing level was. The wind had really picked up by now and we battled to get down and round to the South face again. A good thaw going on at the moment which will initially cause some very unstable slopes but it is set to freeze again tomorrow so looking good for the long run I think. The SAIS forecasts have started this weekend so please remember to check this before you head out and keep your eyes open whilst you move around in the hills.
Posted by Scott Kirkhope at 06:09