Plan B on Skye.

Mike Lates dropped me an email at the start of the week asking if I was free for Wednesday to go and have a look at an unclimbed winter route. After some phone calls and a very generous sentiment from the partner I was supposed to be climbing with, it was on. I set off last night and we spent the night in the Glen Brittle hut so we could get an early start without having to attempt the drive in the morning. 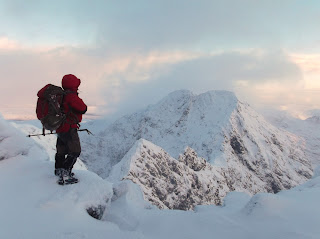 Our first view of the ridge with Sgurr a'Ghreadaidh in the morning sun. 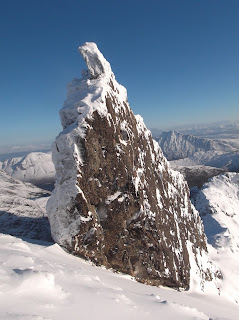 The Inn Pinn stripping quickly in the midday sun. 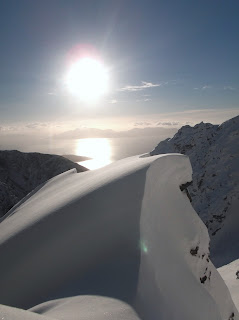 We set off from the Youth Hostel this morning under clear skies but had some pretty nasty weather to get through before we reached the top of Sgurr na Banadich. From here we could see how much snow had been blown over onto our intended route and the swim down the descent gully didn't exactly look appealing. So we opted to just have a nice day out on the ridge. We headed South towards the Inn Pinn with some decent snow conditions at some points along the crest but there is a lot of snow up there at the moment and going is slow in some places. We met up with Tom, Annie and Gemma who had come in along the West ridge and then we all made the bum-slide descent into Coire Lagan. A stunning day to be out in the mountains and my first winter day on the Cuillin, I'm looking forward to more.
Posted by Scott Kirkhope at 13:19