An introduction to Scottish winter.

I've spent the last five days with Jackie and Jane on an introductory winter course for Maximum Adventure. We spent the first three days in the Cairngorms covering the basics of winter skills and looking at winter navigation. We also had a quick hit up Fiacaill ridge on a very wintry day with lots of fresh snow and strong winds. 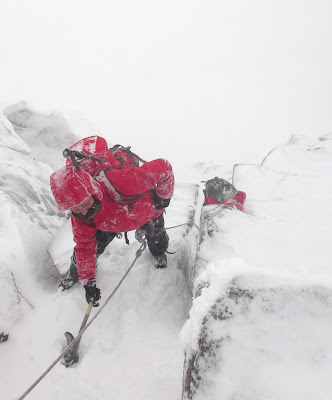 
Yesterdays forecast wasn't exactly promising but initially looked better than today's so we decided to make that the day we would try and get the girls to the top of the Ben. It was always going to be a 'lets just see how it goes' kind of day, and the winds above the CIC were pretty strong and it didn't bode well for the upper section of Ledge route. We carried on, bit by bit, with me always thinking that maybe we would be turning round after the next section, but it was actually very manageable and on the summit plateau the wind wasn't even an issue. We navigated over to the summit and quickly descended next to the Red burn. A great effort from the ladies on a pretty wild day. 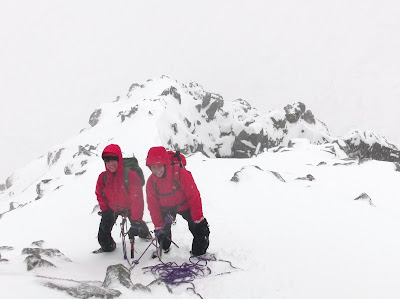 After yesterdays effort, today was always planned to be an easier day. We decided to remove as much of the hard work as possible and headed into the Glen to cover some of the climbing elements that Jackie and Jane had wanted to cover. It was still chilly and with the odd snow flurry coming through but we climbed the Gutter in four pitches and placed some gear and then headed home.

The Ben at the end of Yesterday.

Today was my last day of winter work, at the moment, but winter is still well and truly with us in the Highlands and actually with some fantastic conditions. There is still plenty to go at I'm looking forward to getting out and playing in it myself. April is still a couple of weeks away but if you still want some winter climbing and it's still here please get in touch.
Posted by Scott Kirkhope at 09:54 No comments:

Combe gully to ourselves.

Back up the Ben with Paddy today to get him on something a bit harder and on the walk in we saw team after team head up to Creag Coire na Ciste and No.3 gully buttress but no one had headed round the corner towards No. 2 gully. So we popped round to find that it was in fact empty with just two teams on the White line. The great conditions continued today and in fact the snow is now bullet hard making secure and easy climbing. Combe gully itself is fat and very stepped out at the moment with very little need to swing at all but still great climbing, the wind was cold today and I was glad to be moving quickly. 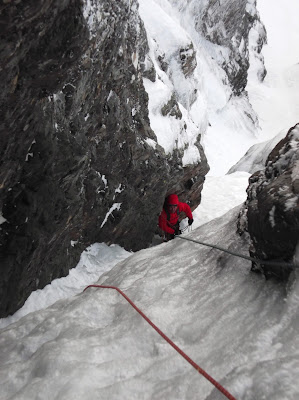 The ice routes are in great condition and some of the mixed climbs are back in condition with enough cloud around today to stop the sun doing too much damage. 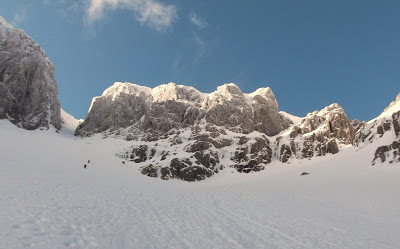 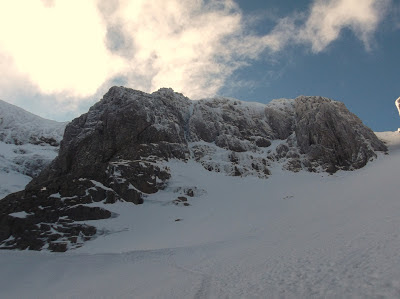 Posted by Scott Kirkhope at 11:32 No comments:

Windy on the Ben.

I was out with Paddy today for our first day of two, and his first ever winter day, and it was a wild one. We battled in to the CIC hut passing a few teams that had decided to turn around which didn't bode well but our plans meant we could be flexible with were we went. Just above the CIC hut we had a look at some boot work and using crampons and moving about on some more difficult terrain which Paddy picked up quickly, so we headed up through the left hand gulch, which has some fantastic steep ice and made our way up to Garadh gully. The route goes at about II/III at the moment and Paddy cruised it, so something a bit more difficult is needed for tomorrow. We topped out and descended back towards the hut and had a look at placing screws on the lead and building Abolokovs.

The wind did ease as the day went on but it was still wild, lots of teams out on the lower routes with Vanishing and Italian right-hand seeing lots of traffic. I saw two teams on central right-hand but both abseiled off I think and I saw two teams back off from Combe. The ice is in great shape and the snow has firmed up giving fantastic conditions for climbing and even the buttress' are white again. 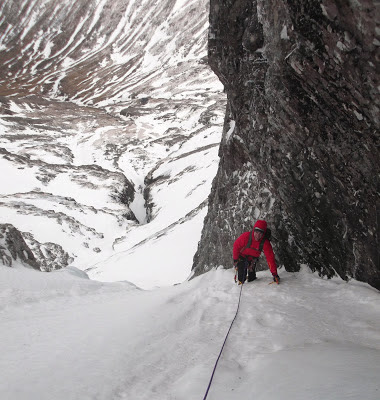 Posted by Scott Kirkhope at 12:36 No comments:

A short break to Creag Meagaidh.

I was out snow holing with the third years of the Adventure and tourism degree students last night. Andy, Gillian, Julie and myself took the fairly large group of 16 up through the window and out to a popular snow hole sight nick-named the W's. As we've had no fresh snow for about three weeks we were pretty sure any banks of snow in this area would already have snow holes in and thankfully we were right. The students had to do some digging to make the snow holes larger and were quite glad that was all that was needed. It wasn't a cold night but we did wake up to freezing temps and a bit of fresh snow.

The routes in the inner coire are looking in great condition and we did see a team on Last post yesterday. The forecast is for a return to cold weather for the next few days and overall, very little precipitation. Fingers crossed for some great ice climbing in settled conditions in March. 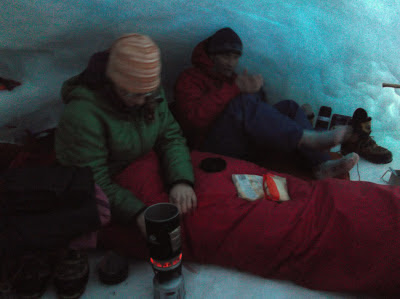 Posted by Scott Kirkhope at 08:30 No comments:

Day 2 with Kevin and Yen and we headed for Ledge route to give them some more experience on the lead. I lead us up the lower ramps which still have a good covering of snow and they took over when we hit the ridge and did a great job of leading four pitches before we carried on up to the top.

It wasn't freezing at all today and there are a few big holes appearing but it is due to cool down again over the next couple of days. Plenty of teams out today but the cloud was down for most of it so I didn't see what they were on but plenty of voices bouncing round the coire. I was working for West Coast Mountain Guides today. 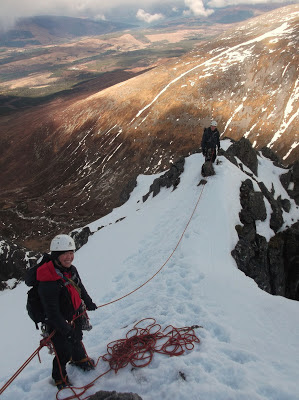 The Sun did shine today too.

Posted by Scott Kirkhope at 10:35 No comments:

I was out with Yen and Kevin today who had returned after their New year course had been plagued by bad weather and other factors that actually prevented them from climbing anything. We headed up to Dorsal arete so they could get straight on the lead. The weather on the walk-in looked promising but the cloud soon came in and it started to rain. The snow pack was wet on the surface but still gave good solid placements and the ice was holding on well. We could do with some snow though as some parts of the routes are now starting to look a bit bare. Today I was working for West Coast Mountain Guides. 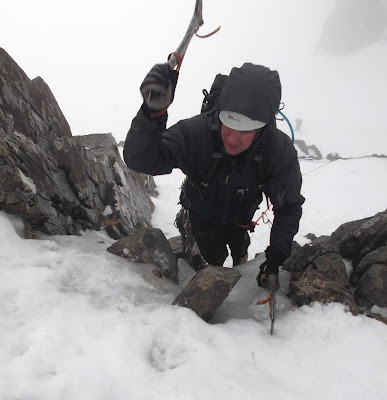 Posted by Scott Kirkhope at 22:46 No comments:

A couple of days with the UHI.

I've spent the last two days with James and Mark on the UHI winter workshop climbing programme. Yesterday we were round on the West face of Aonach Mor having a skills check and throwing in a few problems that usually occur during winter routes and how to solve them. The lower parts of the West face buttress routes are pretty bare now but the gullies are holding snow well and we pitched the ground below the routes to give us 200m of turf, ice and snow. 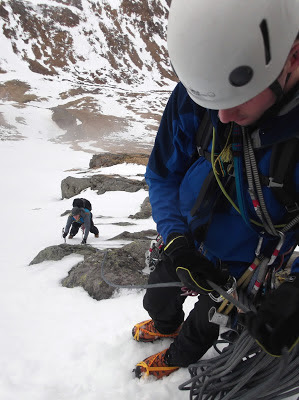 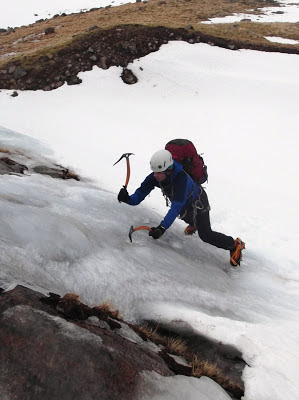 A bit of movement practice on a small step.

Today the guys wanted to look at some mountaineering rope work to help them work towards some of the Scottish classics like Tower ridge and N.E. Buttress. We spent the day looking at moving together whilst placing runners and using natural pro, taking chest and hand coils and switching between the appropriate techniques efficiently. Last nights frost had really firmed things up, with the snow being rock hard this morning and it stayed that way all day in the shade. Plenty of people out on the classic ice lines and Observatory ridge. 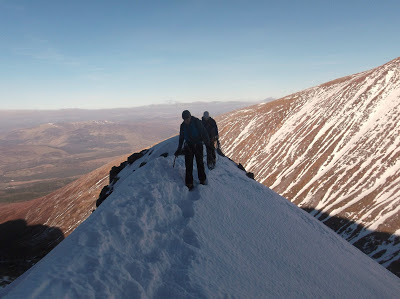 The lower section of Tower ridge. 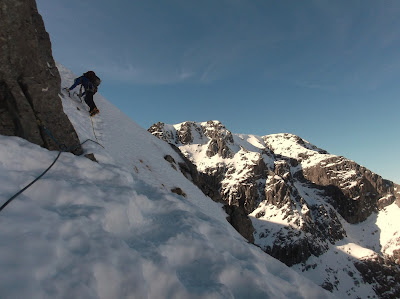 Mark on the traverse. 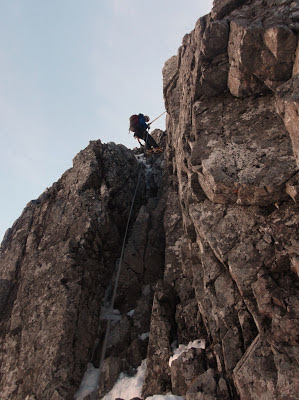 Abseiling into Douglas gap.
Posted by Scott Kirkhope at 09:55 1 comment: