So plan A was to head for Point 5 but unfortunately a team beat us to it, we gave them a bit of time whilst we geared up but it soon became apparent they weren't going to be moving fast. So we thought lets go round the corner to the Brenva face and have a bit of an adventure and an explore. Yes it was catching the Sun but things weren't falling down so we headed up. As we were routing around for the first belay it began, a pretty constant shower of bits of ice from further up the route. "Ah, well! Don't fancy that, back we go."

After some discussion about which routes Connor had done and which routes I had done we finally stumbled across the fact that neither of us had climbed Italian right hand. Which by now was going to fit the bill as we had done enough faffing and could ab back out. Two good pitches of ice and a good chat to Scott and Ian who we were sharing the route with and then back to the CIC for a brew. 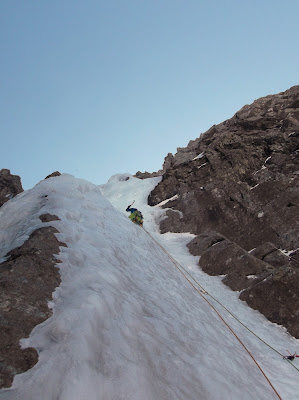