Mountaineering with the UHI

After a couple of days in the Ice Factor to escape the weather I was back out on the hill yesterday with Brodie and Cameron for some winter mountaineering. Yesterday we headed up to the Ben and spent some time looking at some snow belays and then headed up the west gully of the Douglas boulder and down a busy east gully. Today Andy and I headed out with our teams to climb the Dragon's tooth above Glenahullish, this was a great opportunity for the boys to put some skills into practise and for some further coaching. It wasn't as bright today as they had forecast and we had some quite heavy snow showers which have put down a fair amount of snow.
I forgot my camera today so my shots are just from yesterday, Andy will have some shots from today. 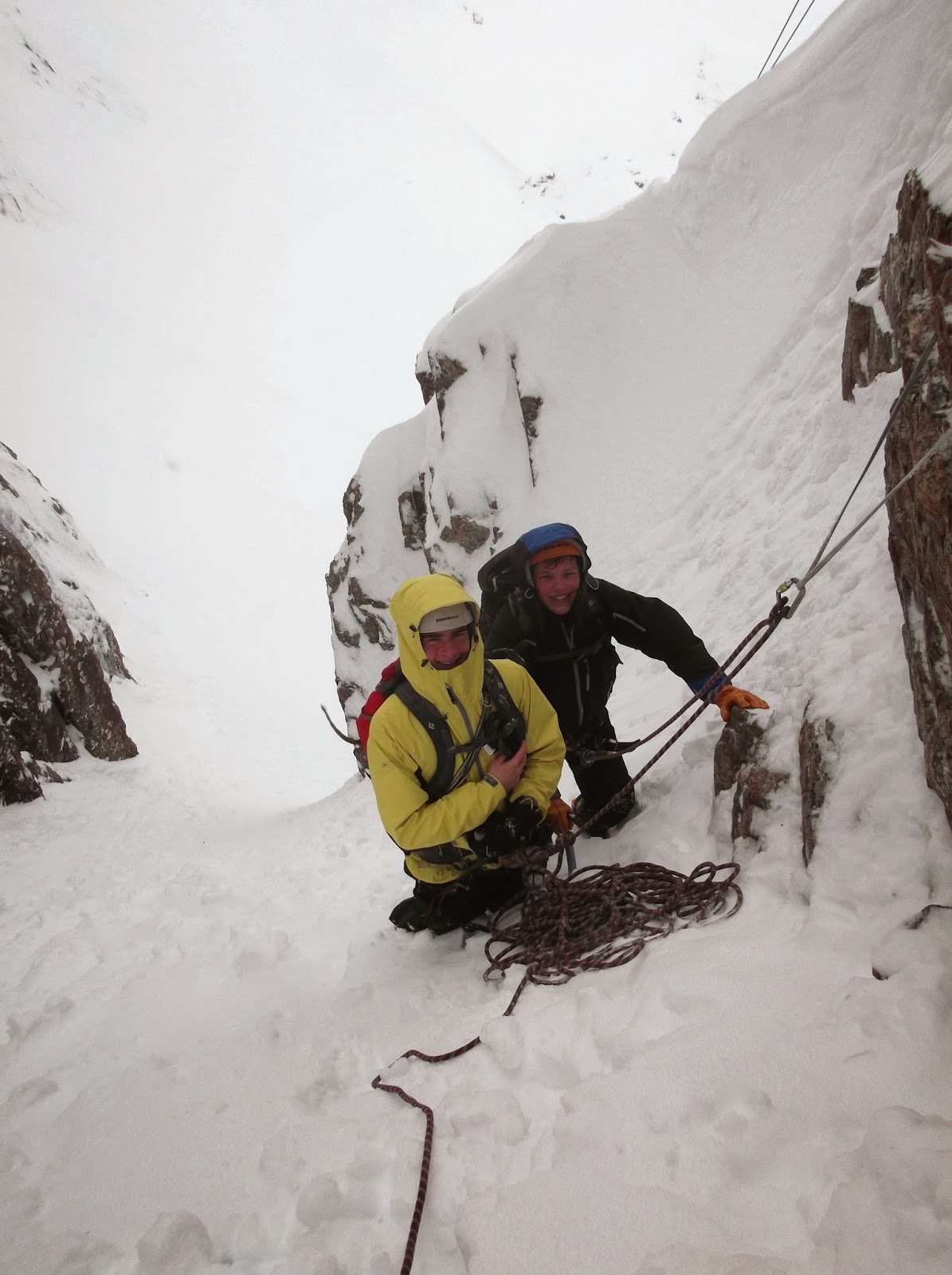 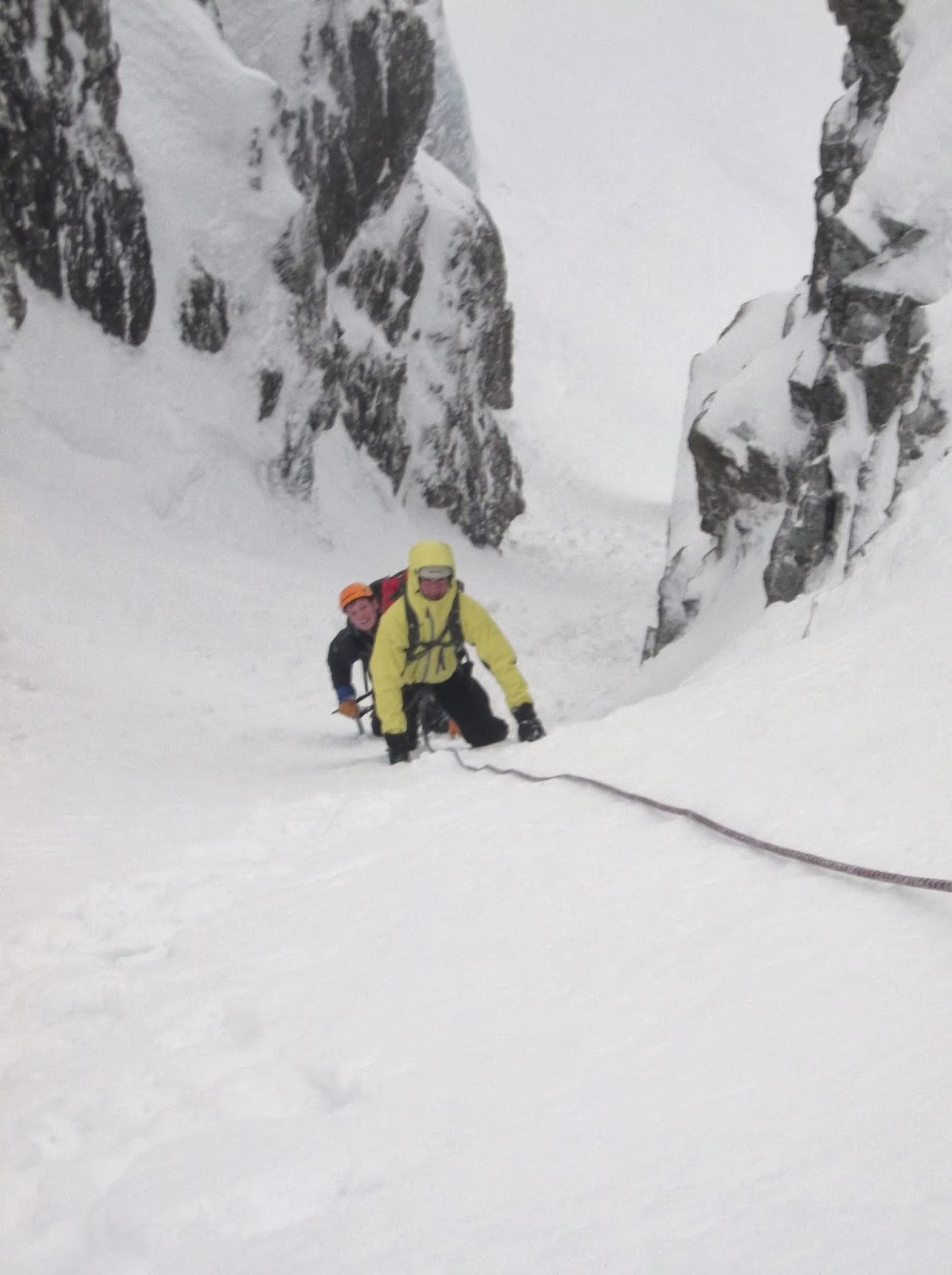 Posted by Scott Kirkhope at 11:23 No comments:

Back up to a damp Ben Nevis.

I'm working for West Coast Mountain Guides this weekend with Martin and Bart, with a pretty poor forecast for the whole weekend we decided to make the best of it this morning. We headed up to the Douglas boulder to climb the South west ridge along with a couple of other teams. The freezing level was above the height of Douglas boulder and we had plenty of showers of wet snow throughout the day with some strong gusts but nothing too bad.
Other teams were on the Curtain again and left chimney on the boulder, more signs of avalanche activity today and we witnessed one release at 700m on a northeasterly aspect from the slopes coming down from just above the halfway lochain path. 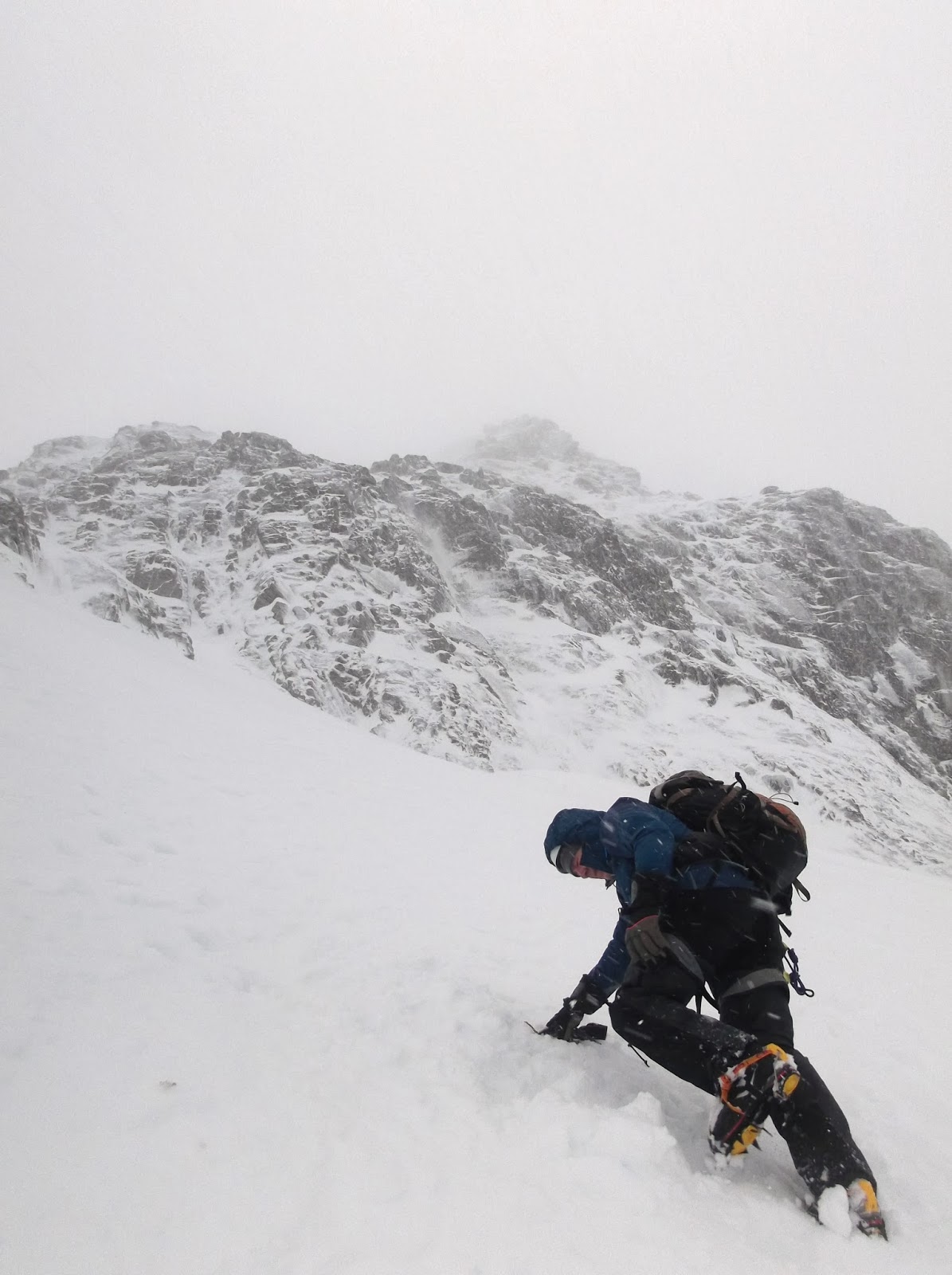 Spindrift being blown back up Vanishing gully. 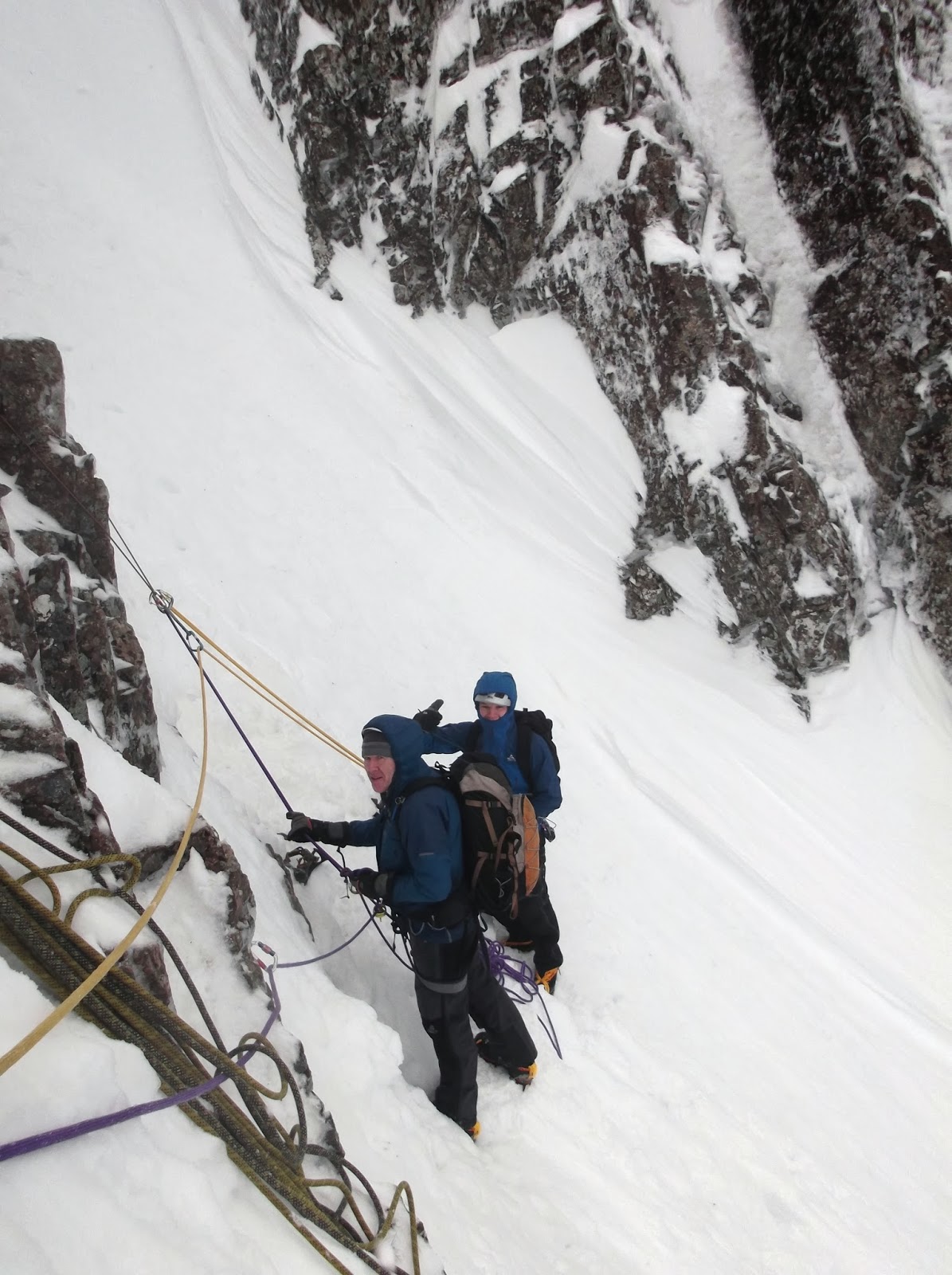 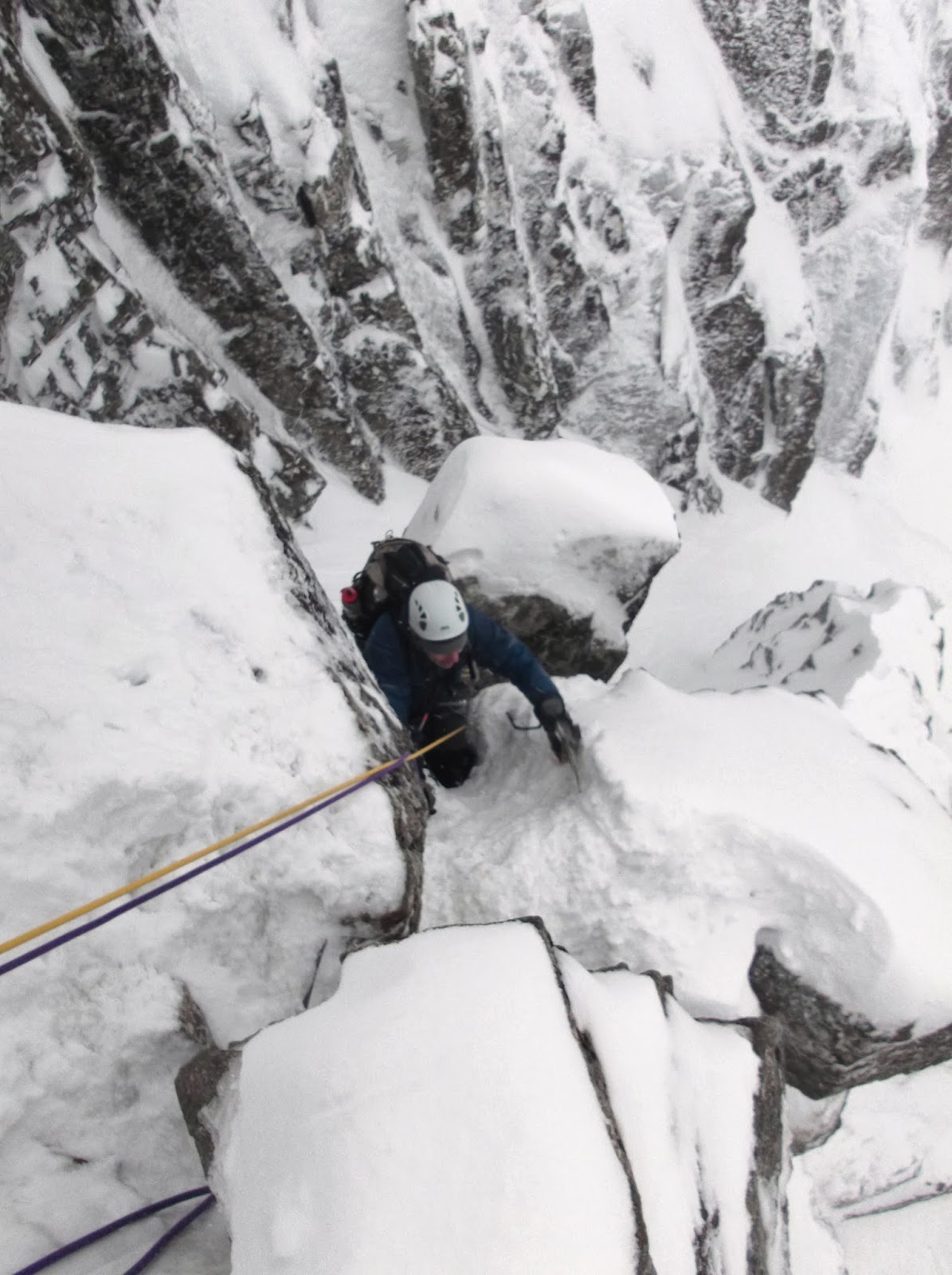 Bart cruising up the crux pitch.
Posted by Scott Kirkhope at 10:19 No comments:

More wild weather on the Ben.

Andy's last day today and it was time for him to get on the sharp end. The weather was challenging with strong winds and a lot of fresh snow so we stayed low and did the first couple of pitches of Moonlight gully and Andy did a great job of leading us up. We didn't fancy going any higher so I took over from here and we descended the snow slopes next to the route. On our descent we got to see the debris from No.5 which had avalanched whilst we were on our route, we heard nothing of it as we were being battered by the winds but it was a big one that stopped about 200m from the CIC hut.
A couple of teams on the S.W. ridge today, one on the curtain, one team did the first pitch of vanishing gully and then retreated. A surprising amount of people on the hill despite the weather but a lot of people choosing to come away empty handed. Today I was working for Abacus Mountain Guides. 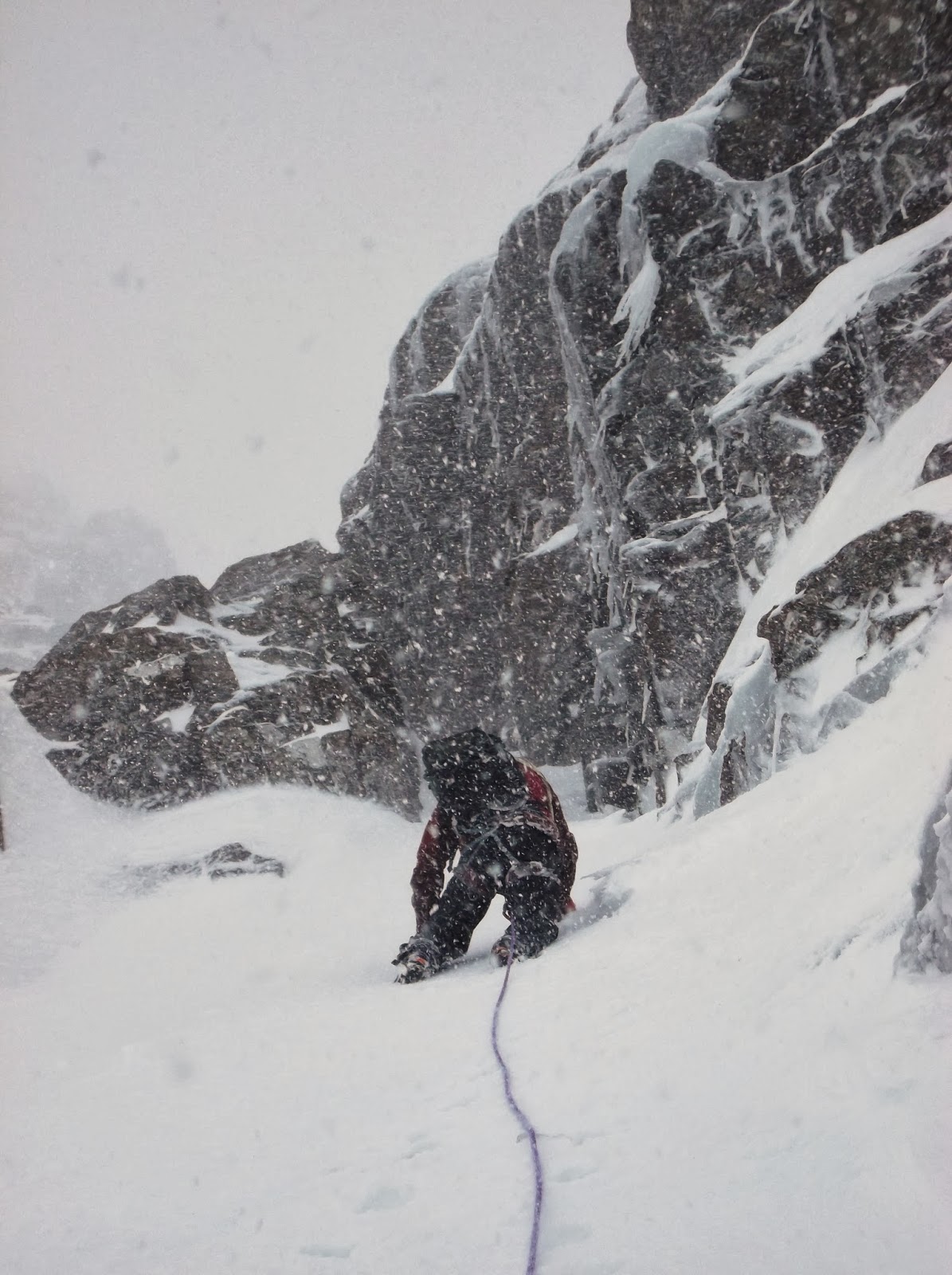 Andy getting stuck in! 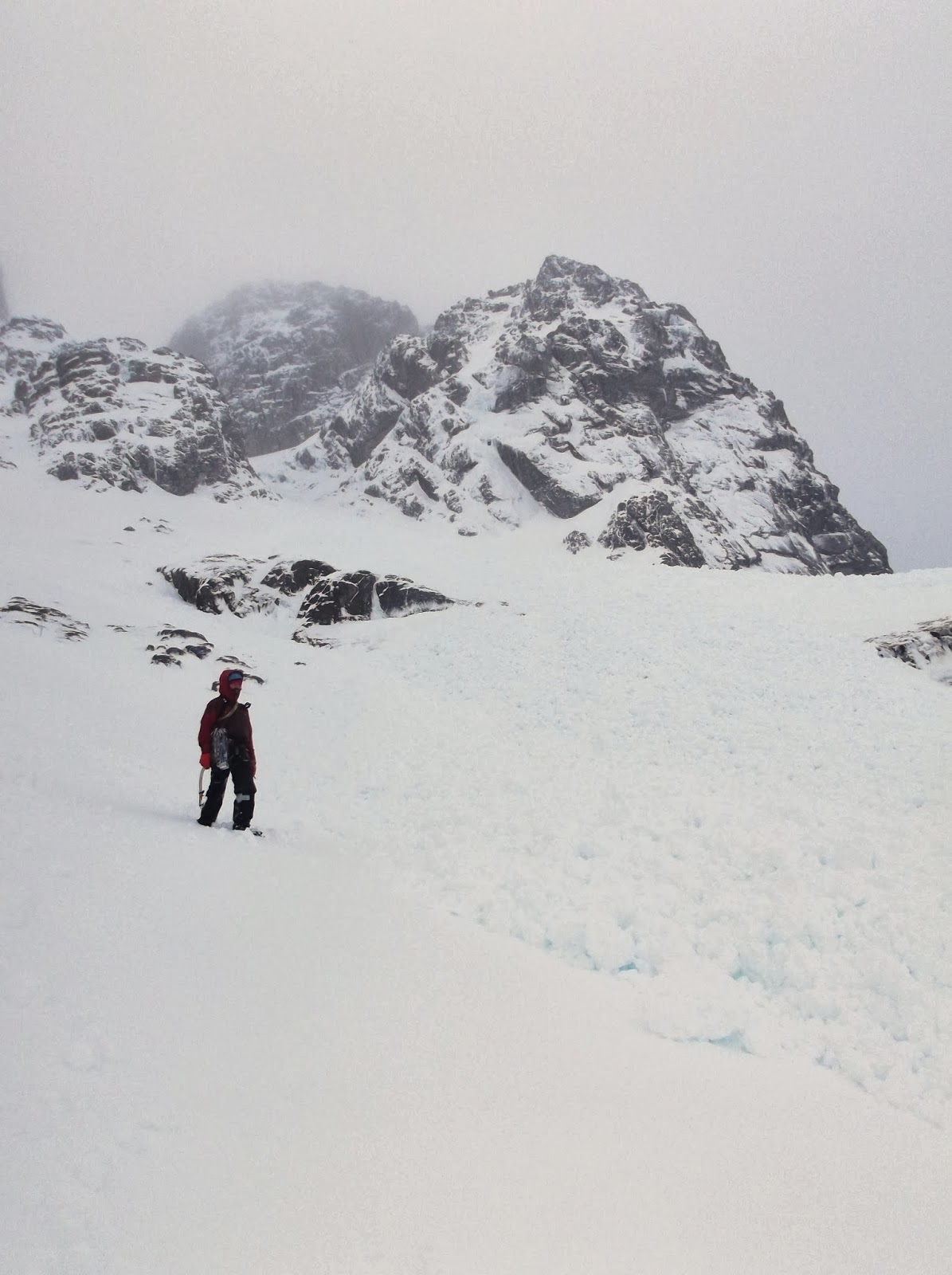 Descending past the debris from No.5 gully. 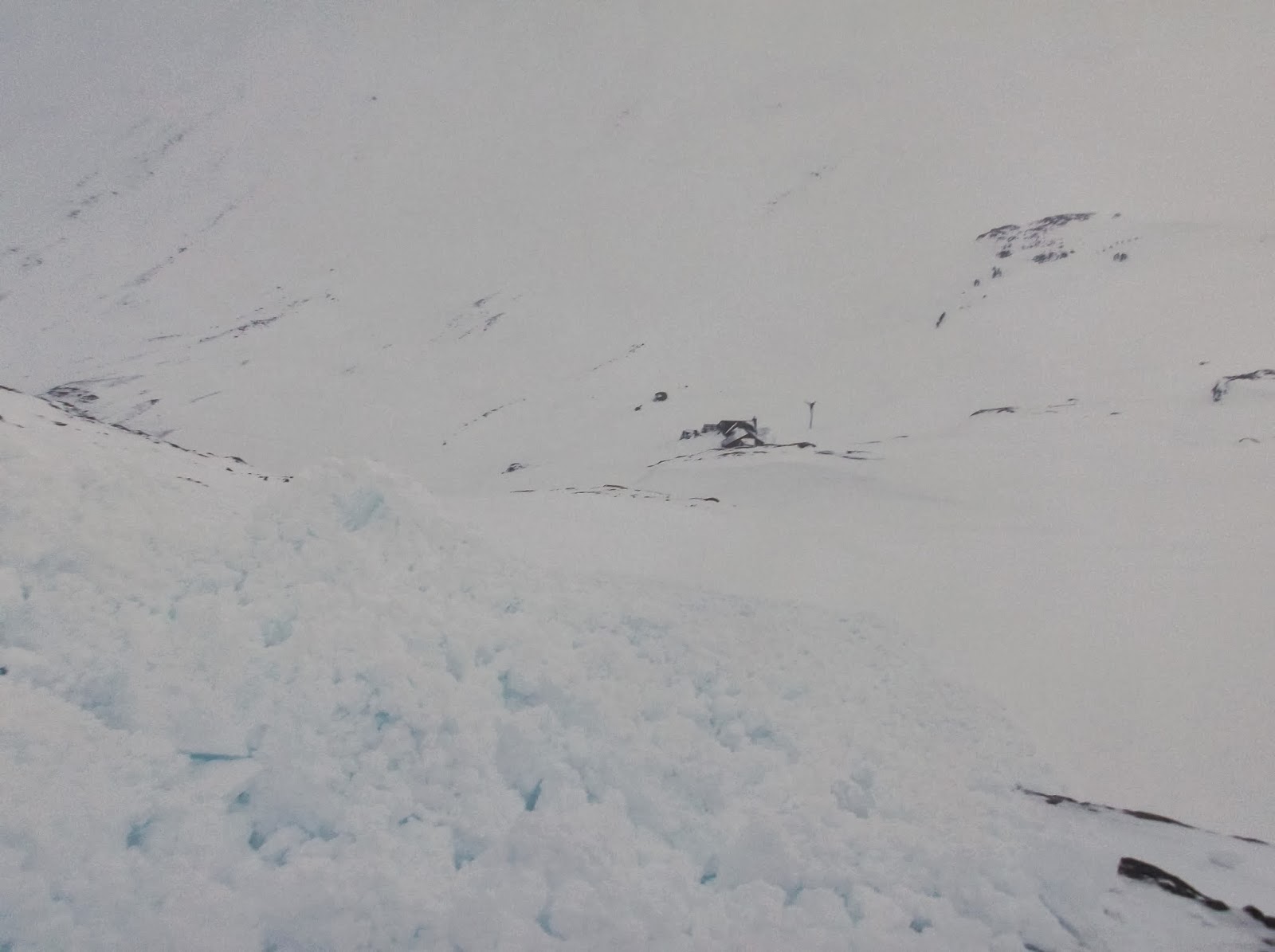 Looking towards the hut past the end of the debris.
Posted by Scott Kirkhope at 09:54 No comments:

The wind and rain returns.

The view out the window this morning was very different from yesterday and more like the weather we've been having this winter.
Andy and I made our way into Coire nam Beith to find some shelter from the Westerly winds and on our way up we heard a rumble as No.4 gully released, it was an impressive sight and a thought provoking one. We managed to cover some stance management, rope work, placing gear and a look at a couple of snow belays before we ran away.
It was wet for most of the day but did brighten up at about 2pm as we were making our way down. Today I was working for Abacus Mountain Guides. 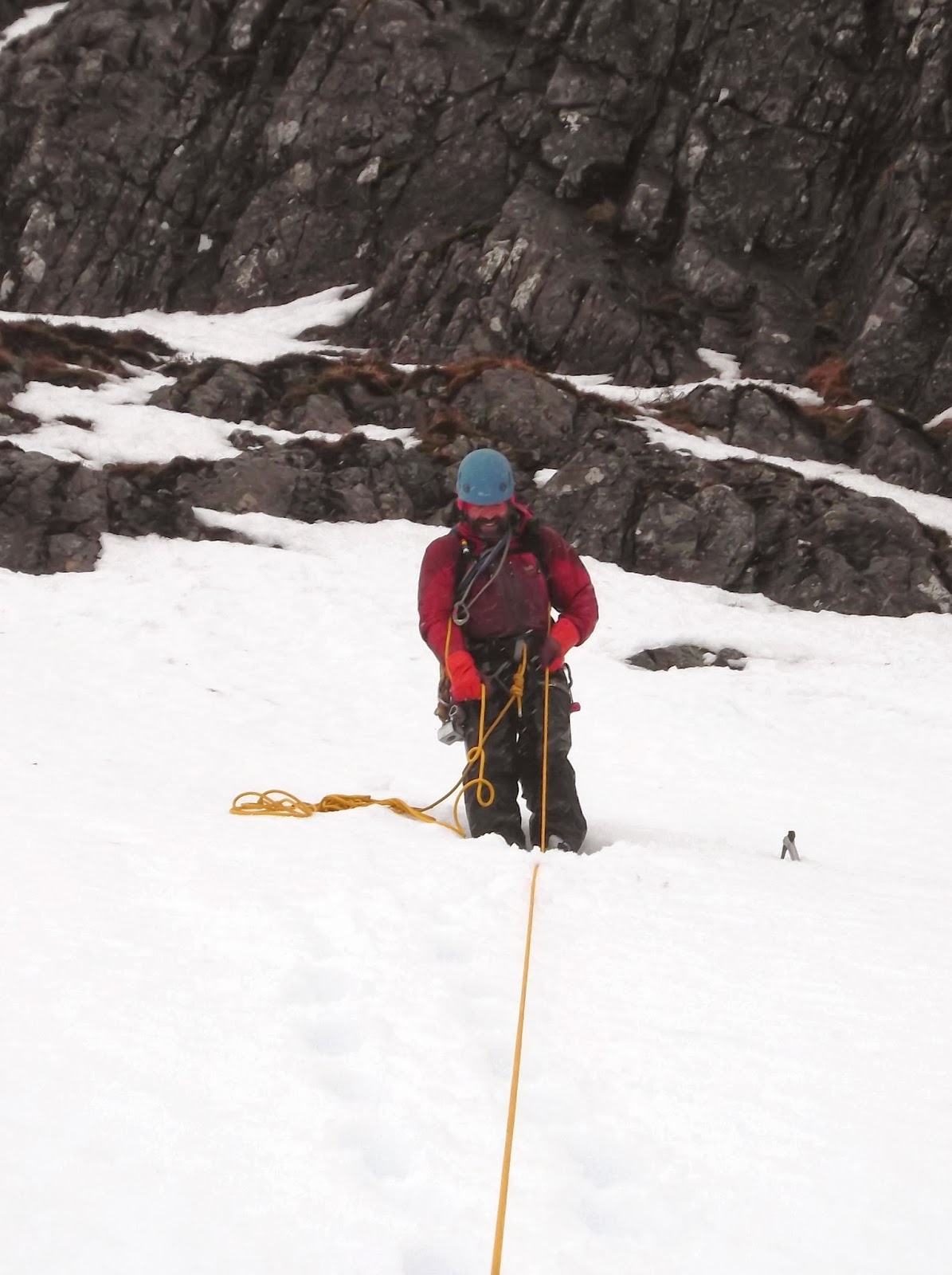 Posted by Scott Kirkhope at 09:24 No comments:

I've had to have a week off work as one of my kneecaps was making a damn good effort to leave the position it's meant to be in. So today was my first day back and what a day it was, it dawned with beautiful blue sky's and a cold crisp feel. The question was simple "Where to you want to go Andy?" His reply of "Tower ridge" put a smile on my face.

It was a great day with a very sociable feel on the ridge, the cloud did come down on us but it didn't ruin it in the slightest. Tower ridge is very snowy at the moment and rock belays are hard to find but thankfully someone had done most of the digging for us.

I would love to show you some photos but unfortunately my SD card was at home by my computer so my camera was of little use. Today I was working for Abacus Mountain Guides.
Posted by Scott Kirkhope at 10:35 No comments:

I didn't blog yesterday, there wasn't a lot to say. It was very snowy and we were struggling to stand at approx 800m so we did we we could and then ran away. Judging by the amount of vehicles that had left the car park by the time we got back others had done the same.

Today we went up School house ridge above Ballachullish, which gave us the chance to put lots of the groups new skills into practice with some lead coaching on the way. The ridge finishes at just above 800m which meant we managed to stay away fromt the worst of the wind. 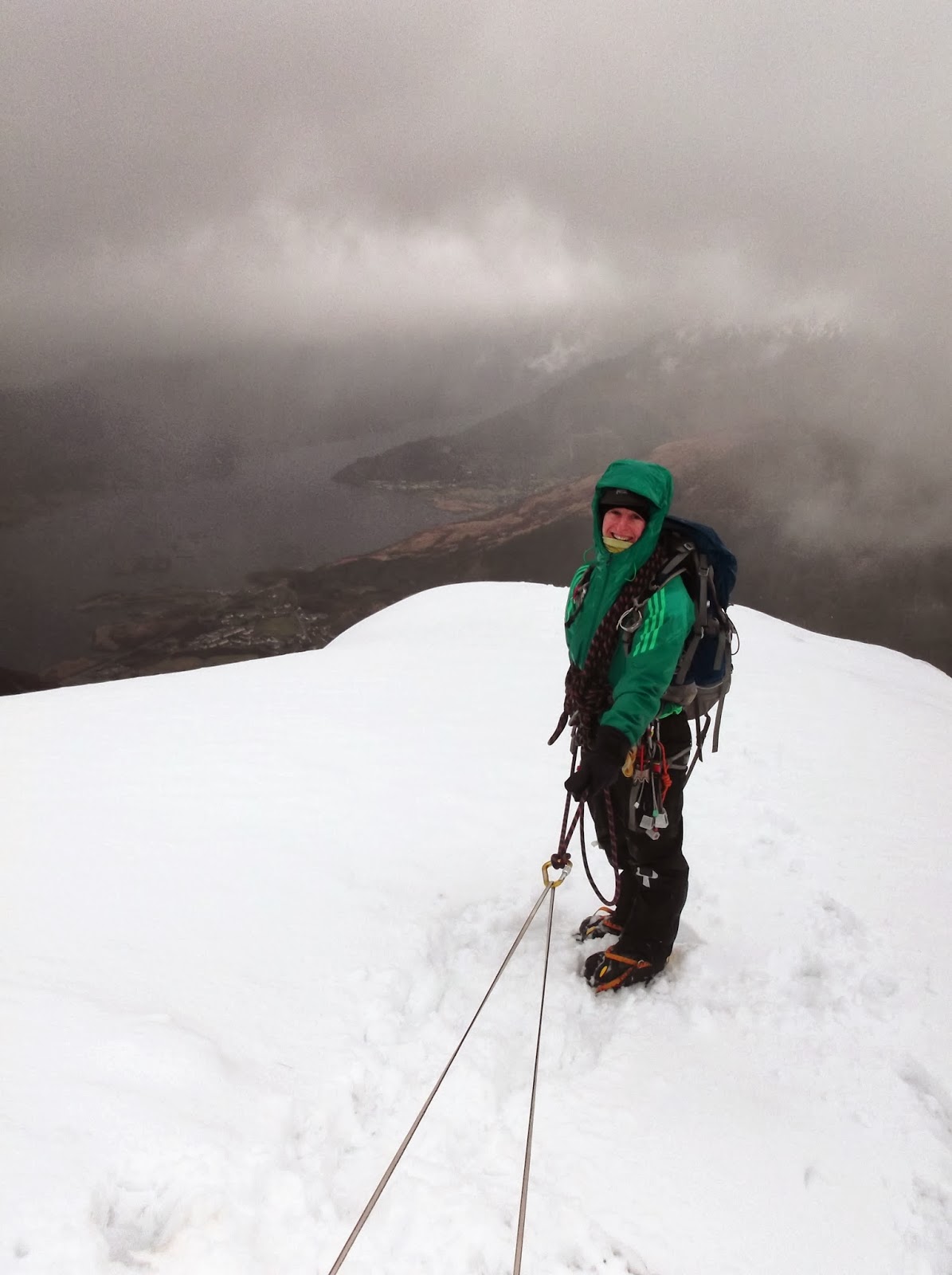 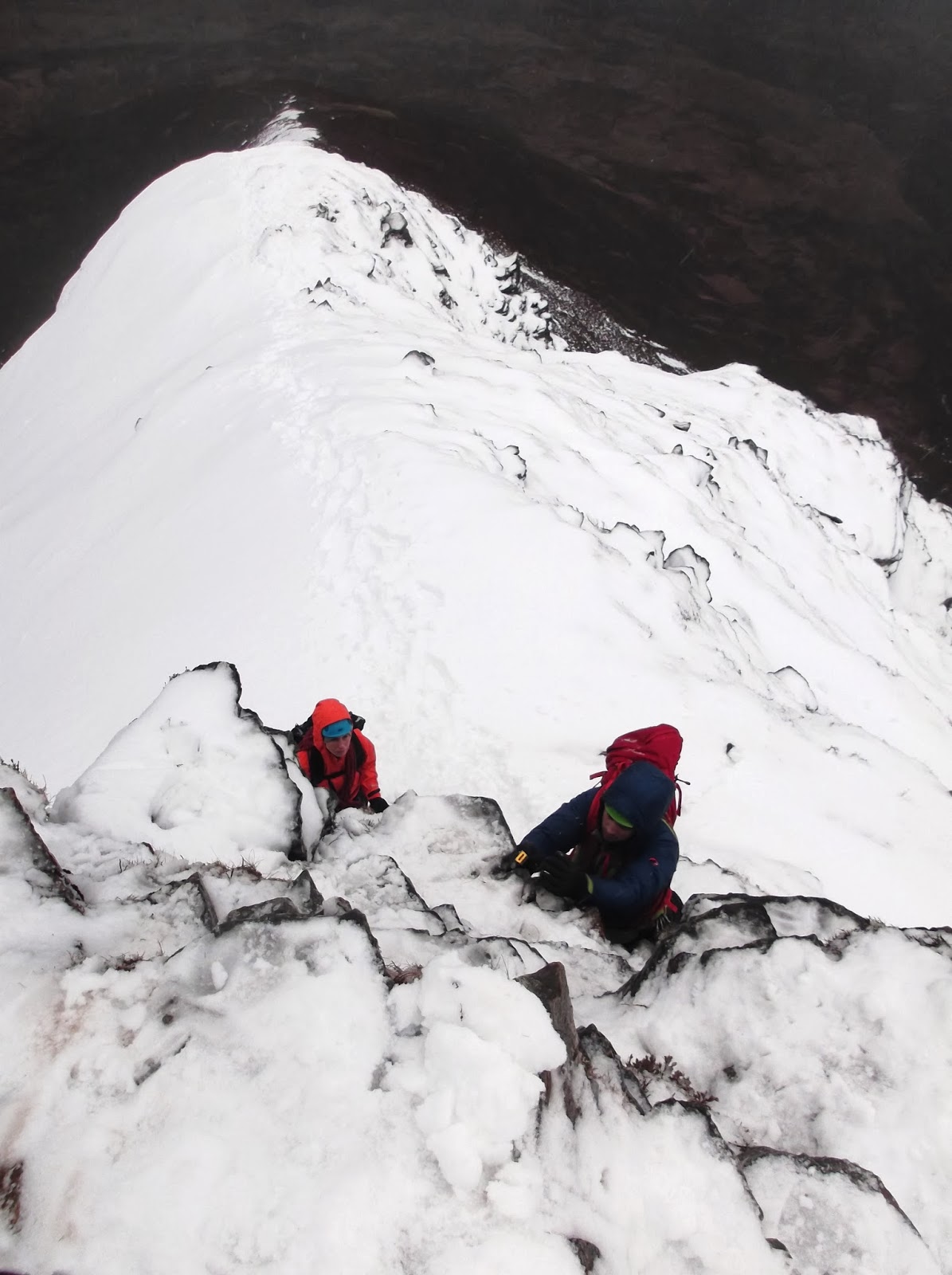 Posted by Scott Kirkhope at 11:41 No comments:

I was out with four members of the Karabiner Mountaineering club today for Mountain Motion. Today was a bit of a refresher for them so we headed on up behind the crowds up to Stob Coire nan Lochan, we made our way up the east ridge and down the west, refreshing their skills and looking at avalanche avoidance and the snow pack as we went round.

Lots of teams on the crags with Scabbard chimney, Spectre and Innuendo getting done on the Summit buttress, on the other side of broad gully teams were on Twisting grooves, Moonshadow, Crest route and more teams than I could work out on Reaburns, Ronnie and Jon said Central grooves was in great condition too. 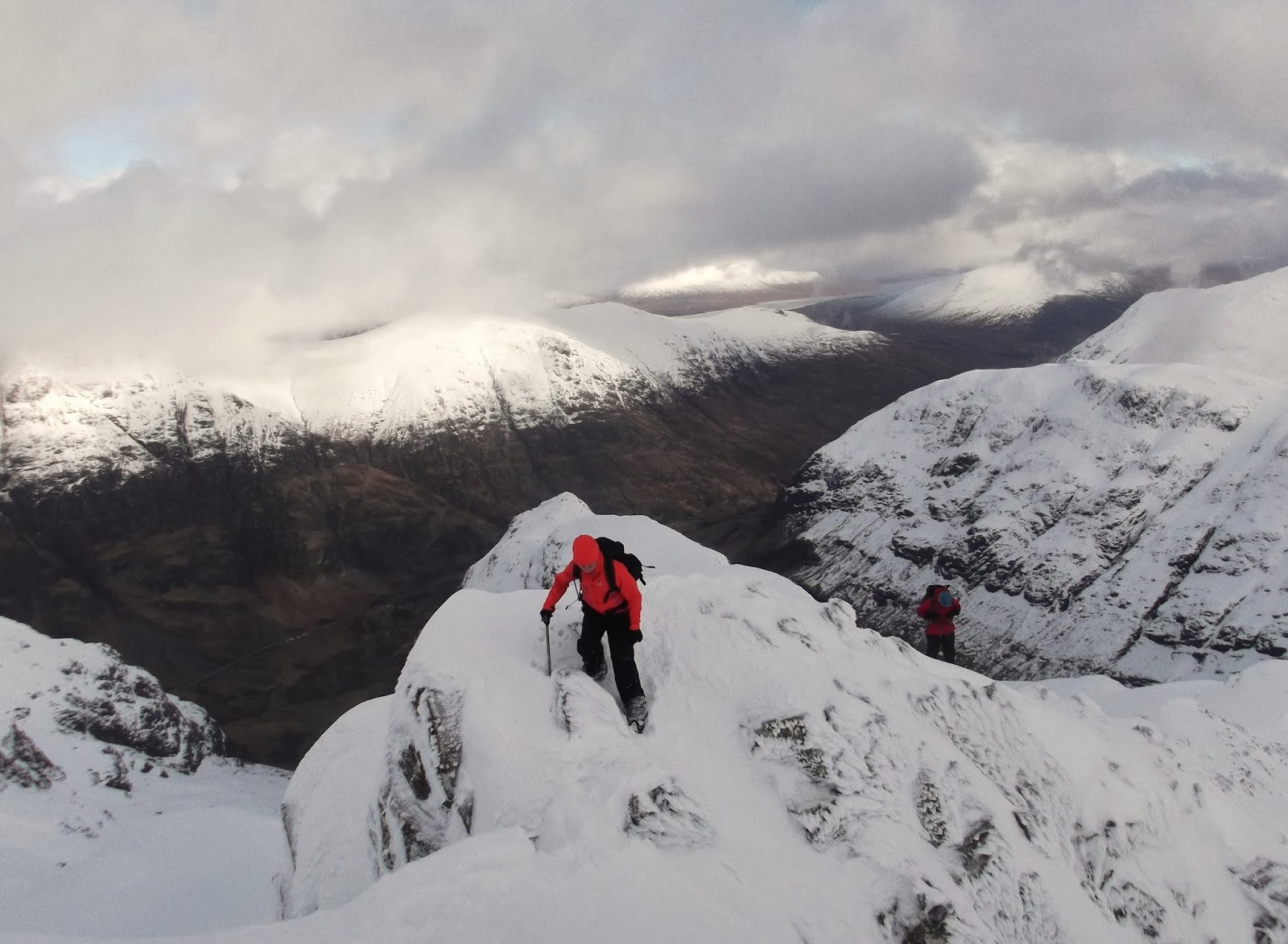 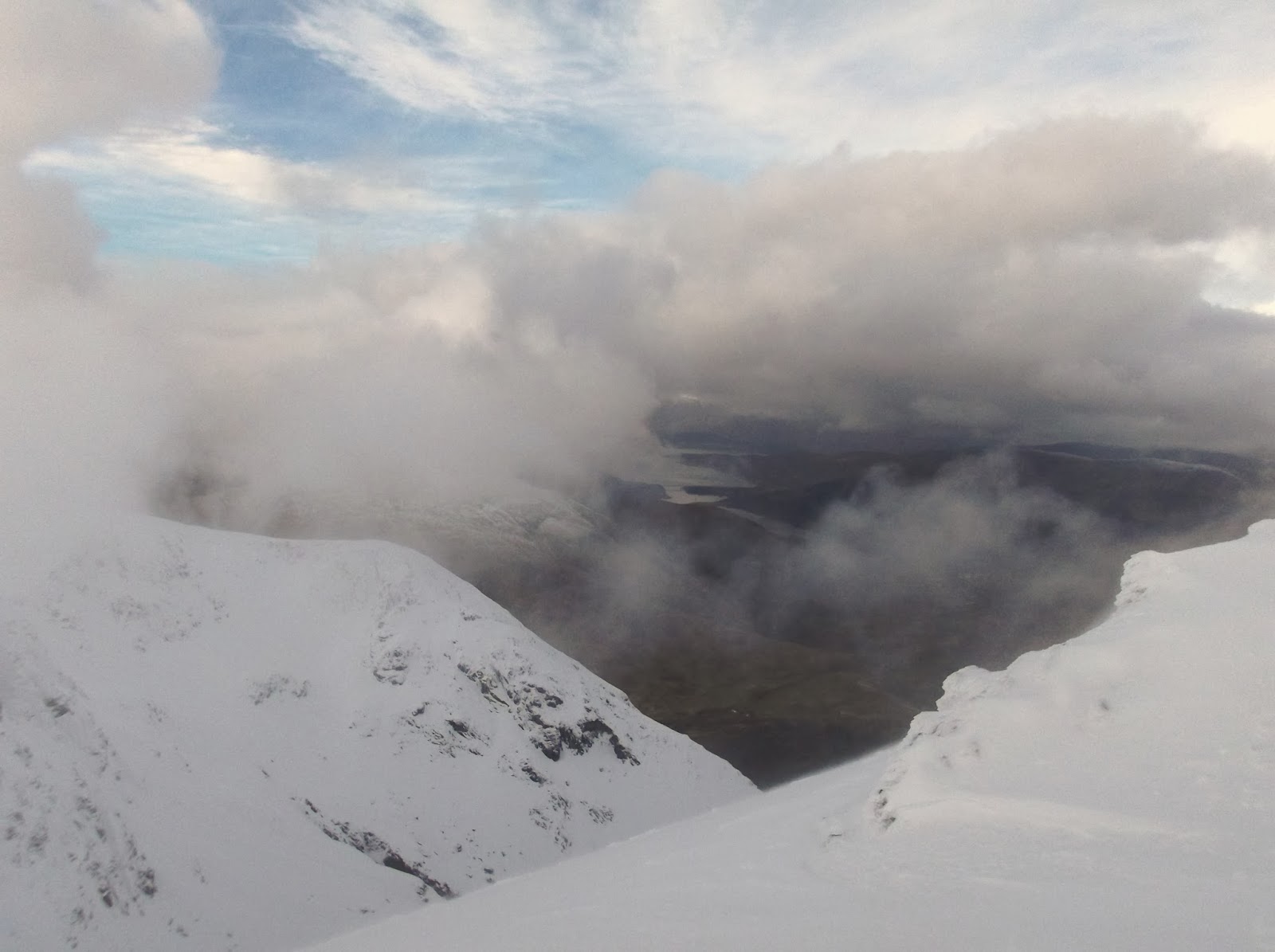 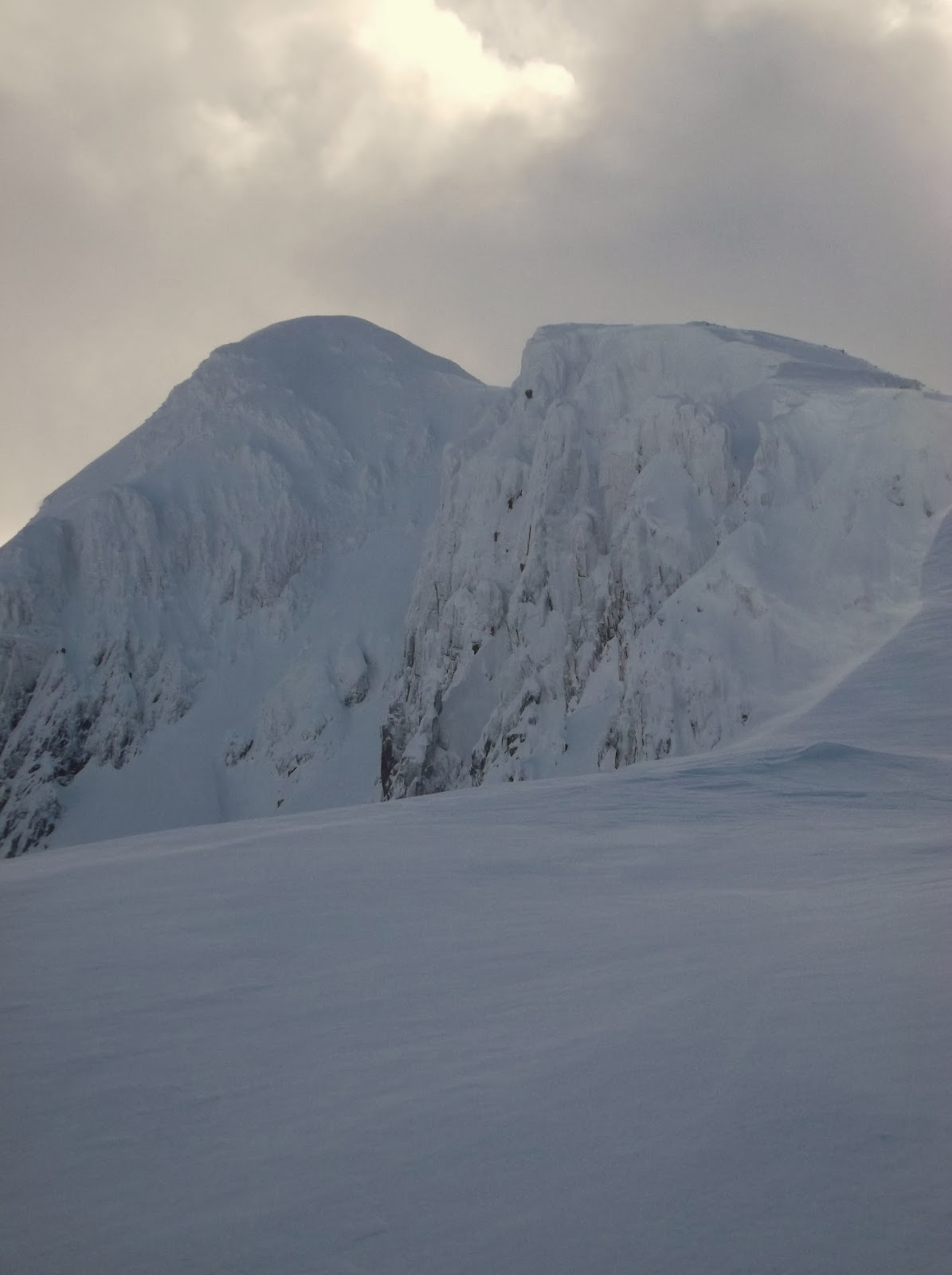 Posted by Scott Kirkhope at 11:36 No comments:

Back to the wild weather.

Ryan and I headed for North buttress on the Bauchaille today hoping to find some shelter from the wind. It was a damp walk in but it soon turned to snow with a driving wind. It took a while to get to the base of the route as we swam through quite a bit of deep wet snow to get there but conditions on the route are the best I've ever seen. There is a good amount of neve and ice in the back of the chimney and with enough gear on the side walls to keep it feeling IV,4. After a couple of pitches looking at stance management, gear placements and building belays we decided to look at abseiling to avoid topping out into the strong winds. Today I was working for Mountain Motion. 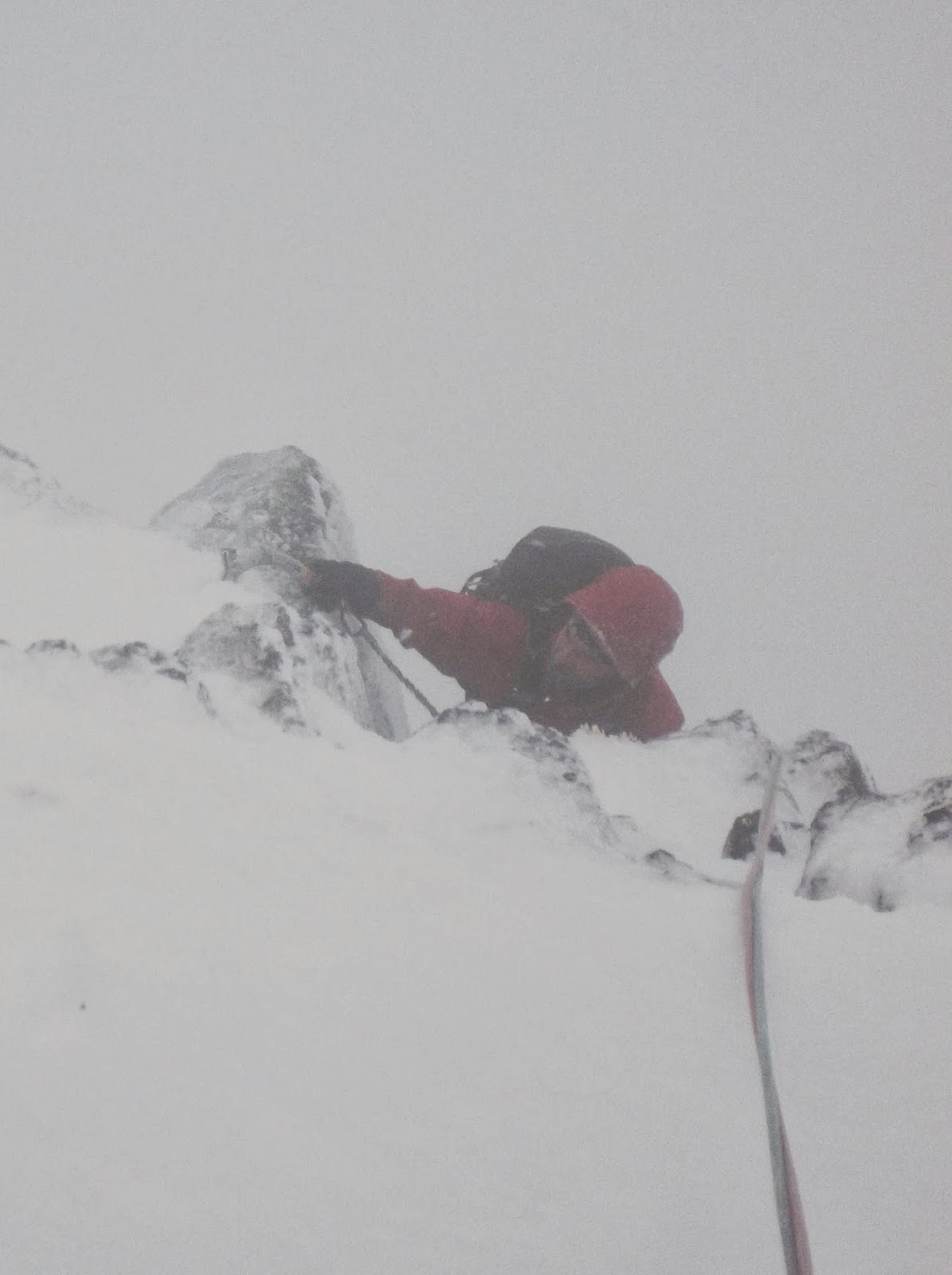 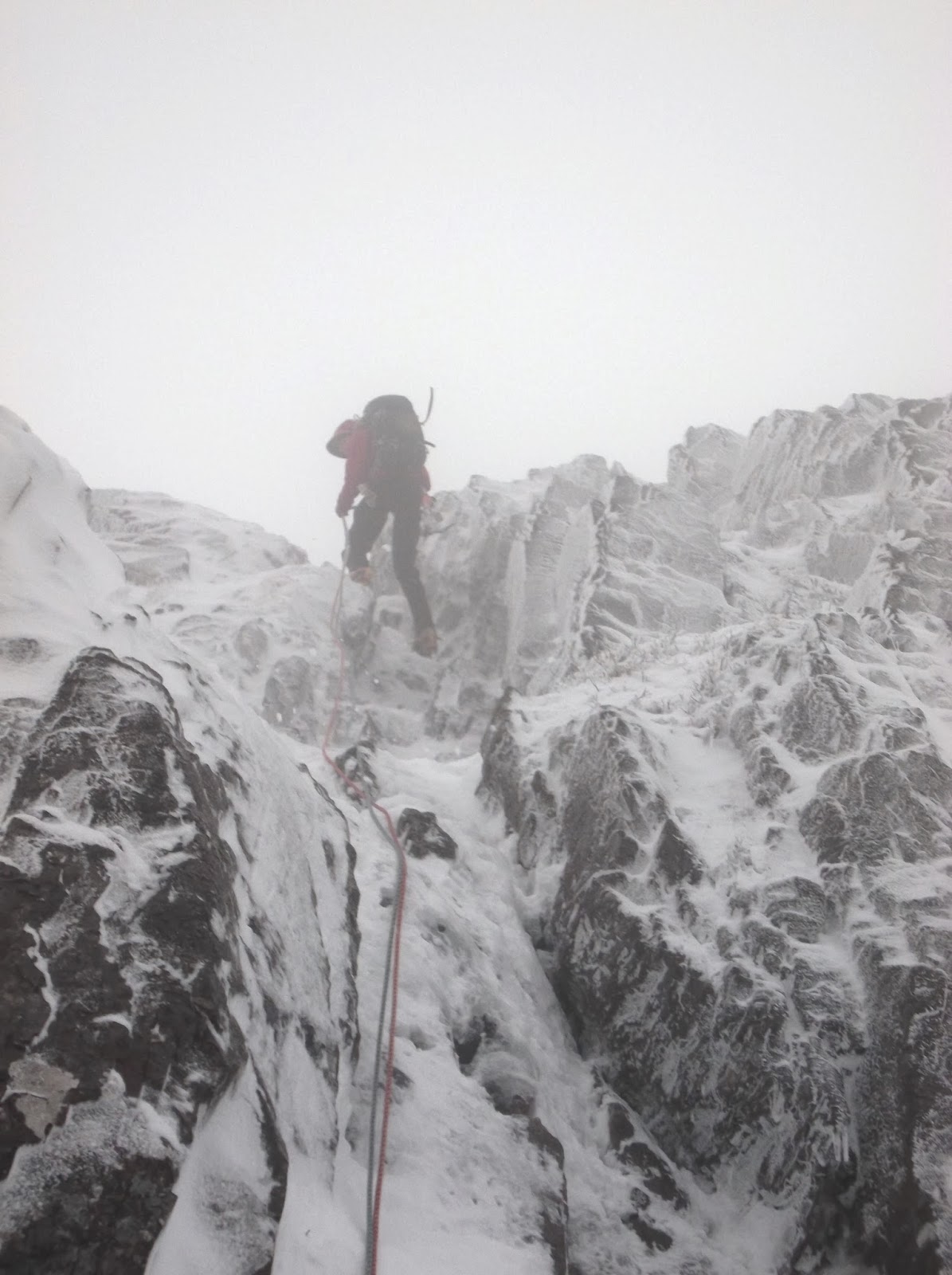 Looking back up the first pitch on our way down.
Posted by Scott Kirkhope at 11:01 No comments:

Ledge route and finally some sunshine!

Ryan and I headed up to the Ben this morning with a good forecast on the first day of his climbing course. We found the fresh snow up to the foot of No.5 to be shallow and with an annoying icy crust underneath making for hard work but we skirted up the side of the gully and carried on up to where we hit the ridge. The snow from here on up was excellent, good firm neve and first time placements on the steeper sections. We took it as direct as we could to add some interest all the time looking at some rope work and stance management. Today I was working for Mountain Motion.

It was quiet on the mountain today with a couple of teams on the Douglas boulder, Mike headed round to N.E. buttress and I saw one team of three heading into the Ciste. We headed round to No.4 gully before we headed down and saw some very large cornices over No.4 gully and North gully. 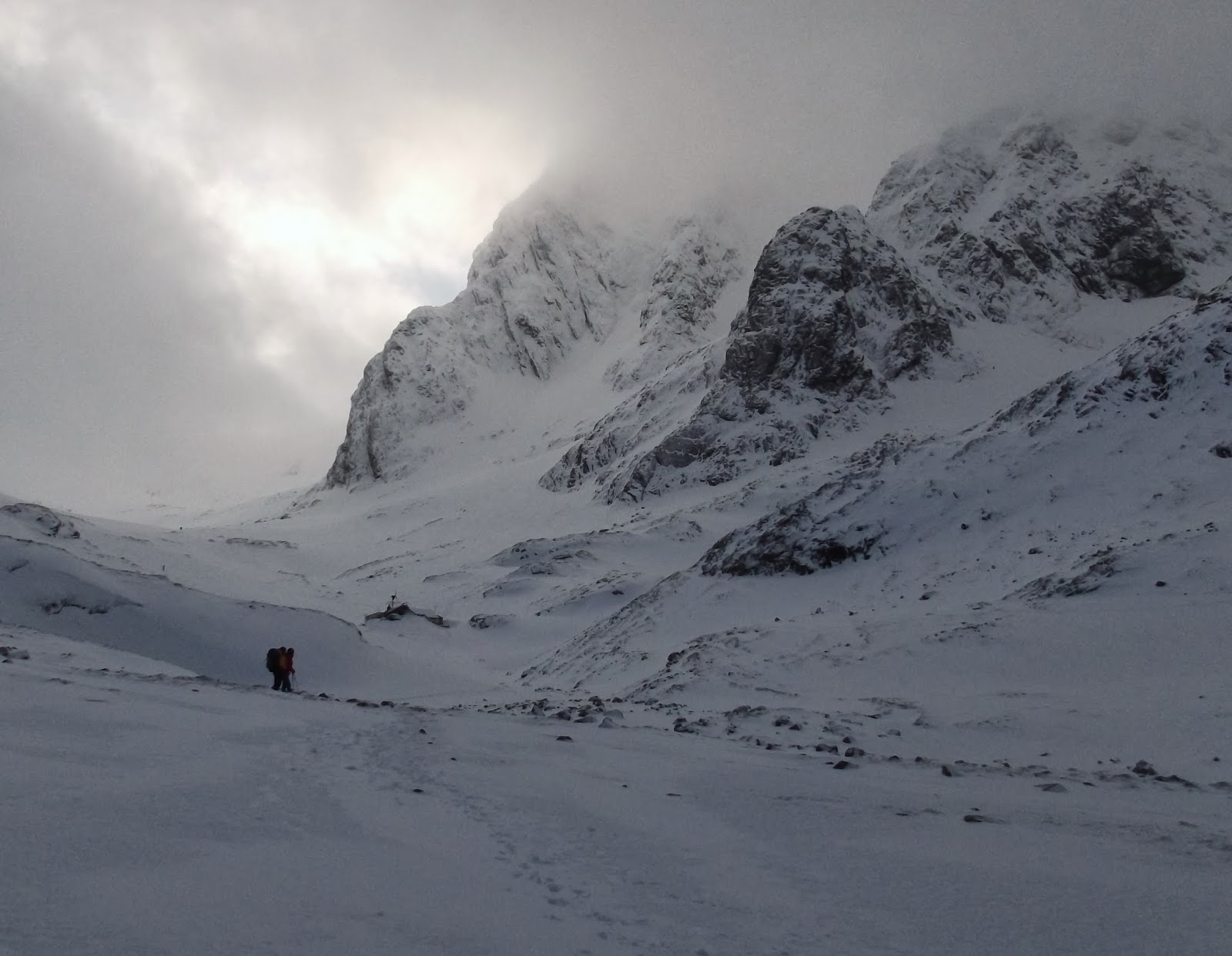 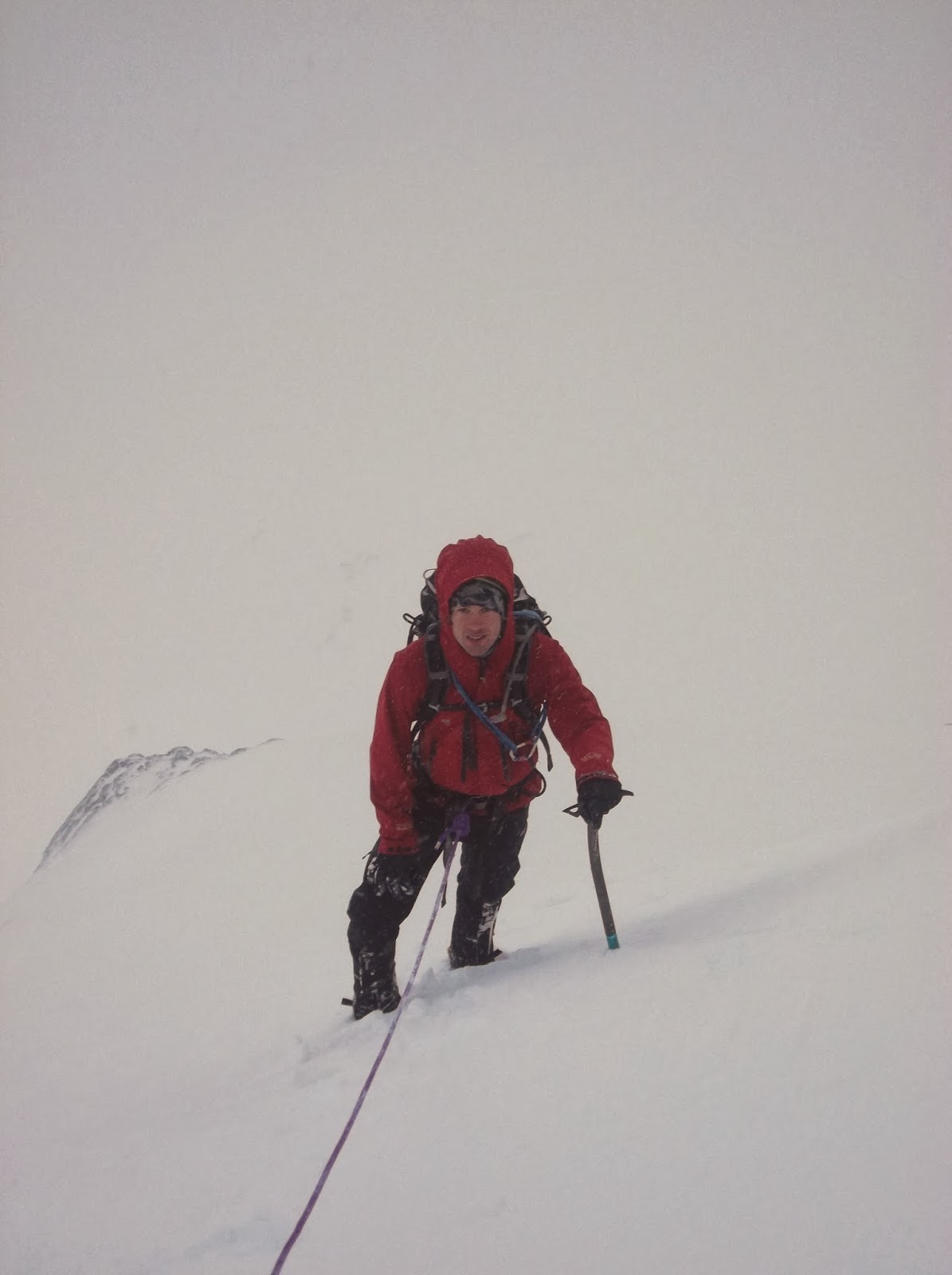 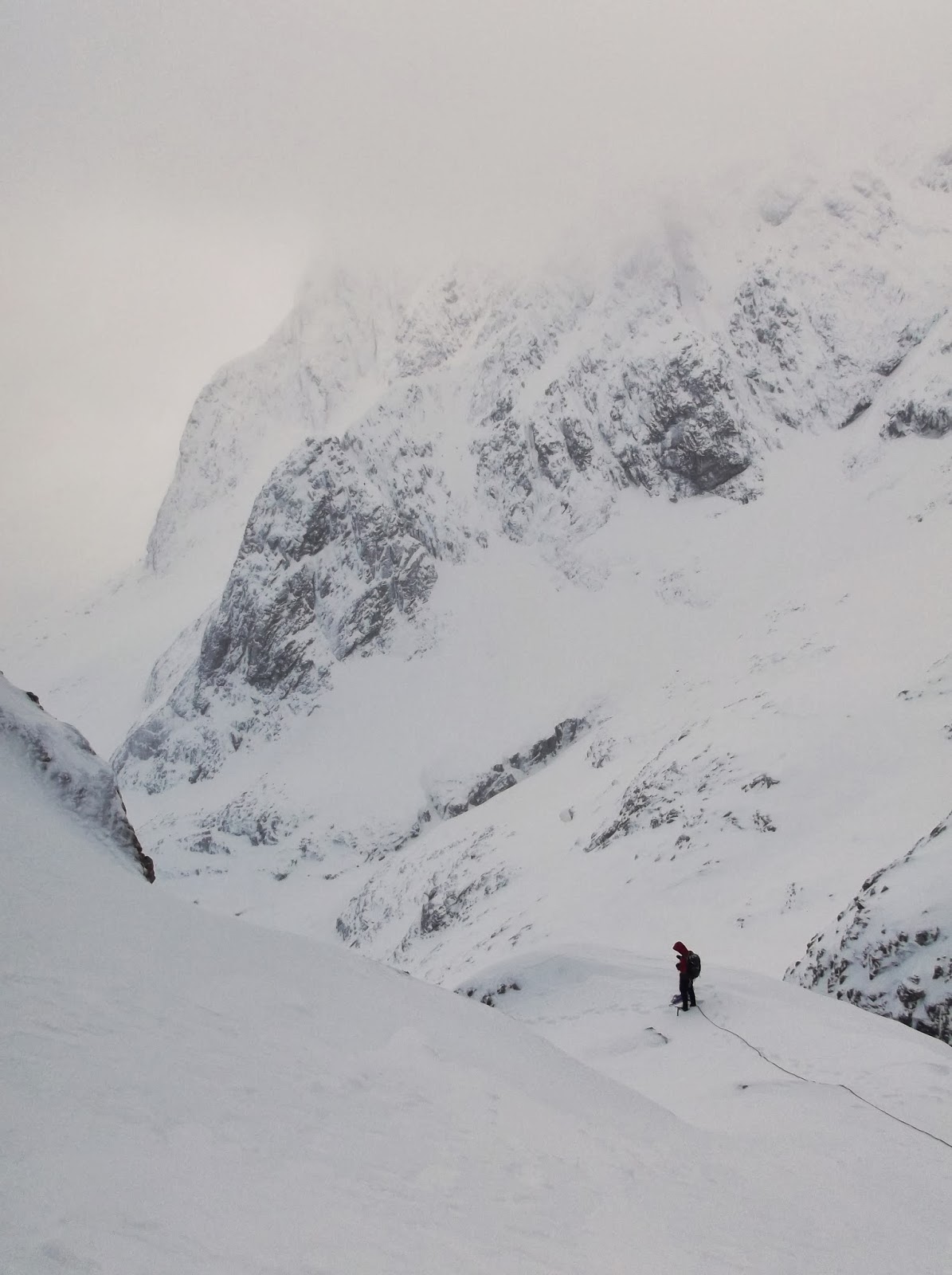 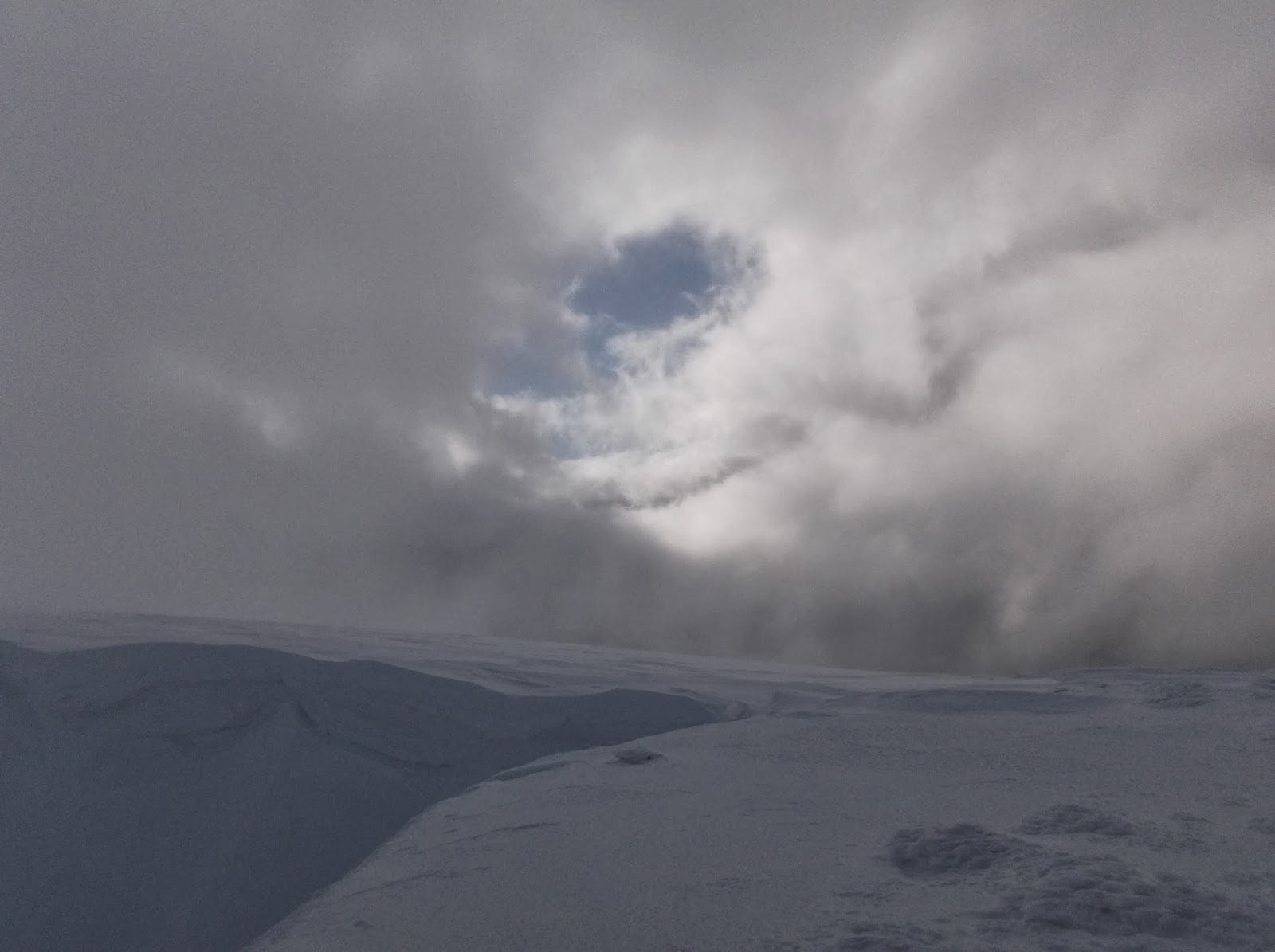 Posted by Scott Kirkhope at 10:18 No comments:

I was supposed to be out with Steve and Sarah this weekend but due to illness we had to give yesterday a miss but Steve and I managed to get out today to give Steve his first taste of Scottish winter. We headed up the wee Bauchaille expecting to only get as far as the Bealach, although conditions during the showers were pretty horrible, in between there were some bright spells. We managed to battle up to the summit of the northern top and back down again and then spent the rest of the afternoon looking at ice axe arrest before we ran away. The freezing level was at about 900m with heavy showers passing through and lots of drifting.
Posted by Scott Kirkhope at 10:42 No comments: