The final weekend of winter work.

I spent the weekend working for Hebridean Pursuits with a great bunch of guys on a winter mountaineering course. We climbed Stob Coire nan Lochan via the hidden valley on Friday, made the best of a poor forecast on Saturday with a tour of the Douglas gullies on a very quiet Ben Nevis and then yesterday we had a great day on Sron na Laraig. There has been plenty of fresh snow over the last couple of days and the snowline has crept down the hillside over night.
Whilst I was out with the guys, Hannah, Dave and Julie were on the Ben with a group of 24 from Falmouth and Exeter university. There plan was to do the three peaks but unfortunately one of their minibus' broke down on the way here, so it just turned into a Ben Nevis weekend for them. They did a great job and were up and down in 7 1/2 hours, which is very respectable for a winter ascent, especially seeing as most had not been out in winter before. 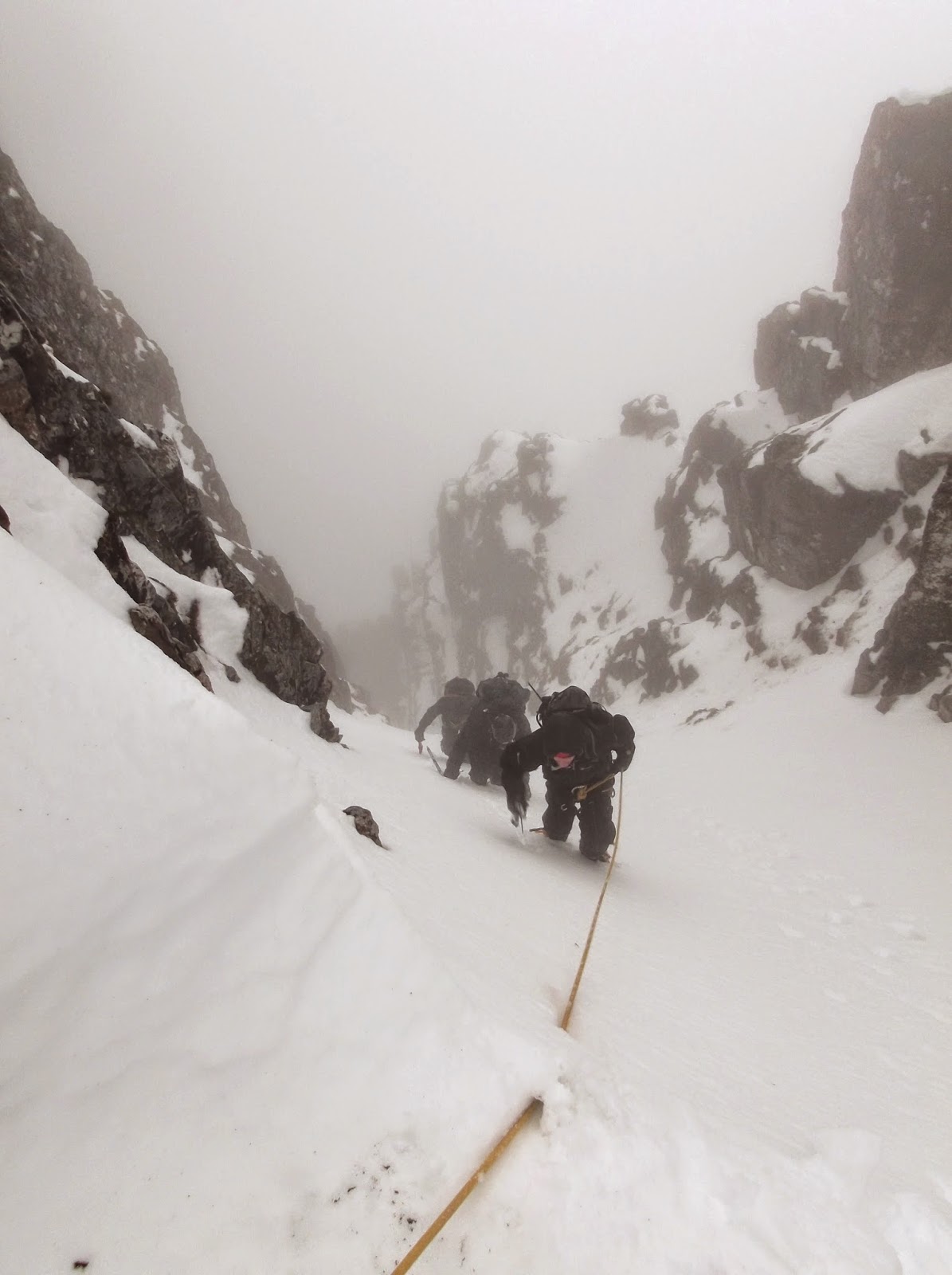 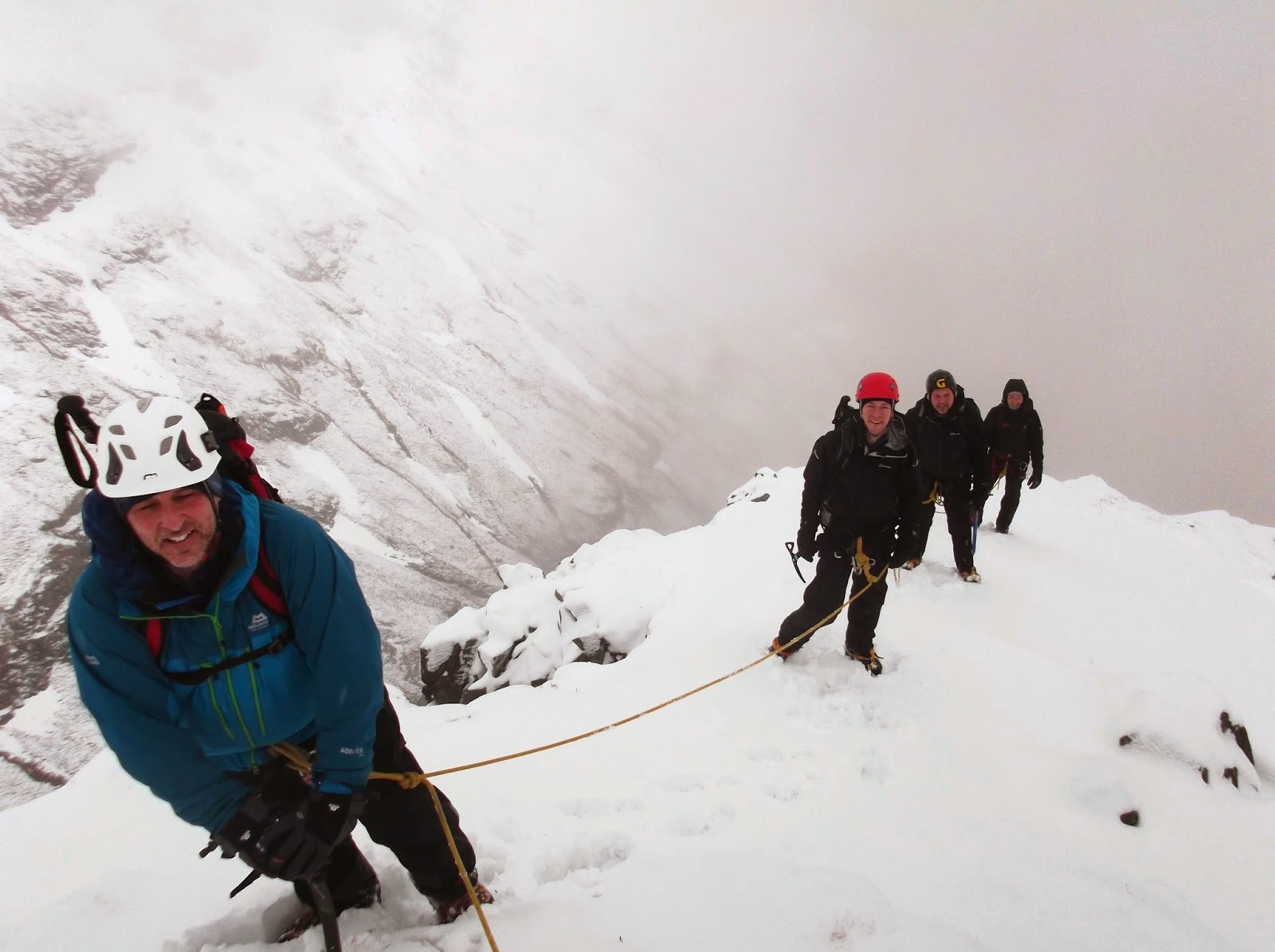 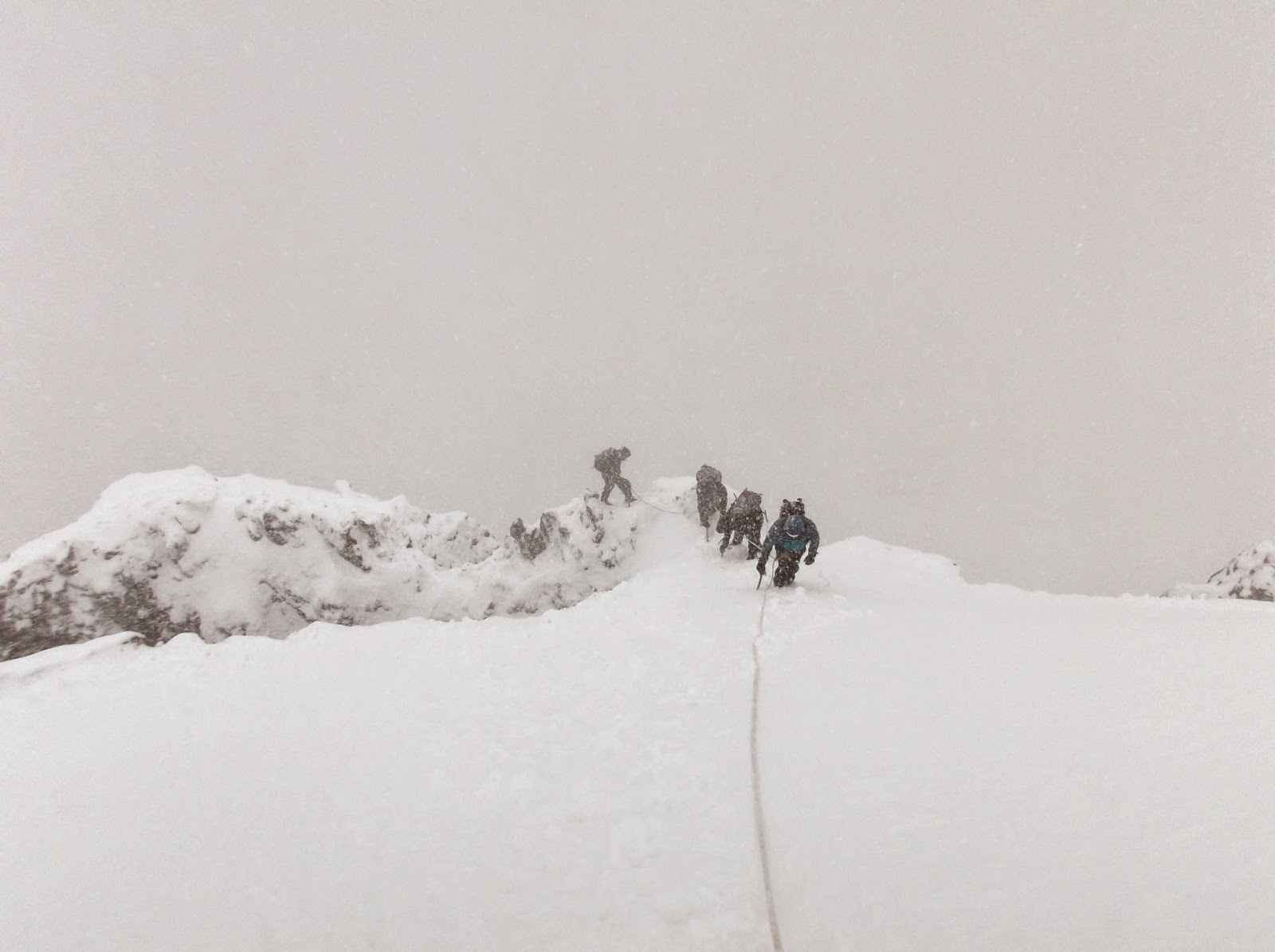 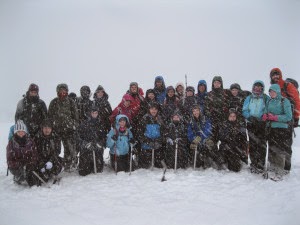 A successful team on the summit of Ben Nevis. photo: David Buckett.
Posted by Scott Kirkhope at 01:48 No comments:

Spring in the Outdoor Capital

Well spring has well and truly arrived in the Outdoor capital, this is a great time of year with so many choices and not enough free days to fit it all in. Down in the Glens we are enjoying dry rock and dusty trails but on the higher tops there is still great ice climbing and skiing to be had. I've had a great few days off enjoying the weather with the family after a busy winter and a few bits of work in between, yesterday I was out mountain biking above Kinlochleven with 2nd years from the University of the Highlands and Islands. It was a stunning day to be out no matter what you were doing but winter has made a return this morning with snow down to about 400m, just in time for my last weekend of winter work. 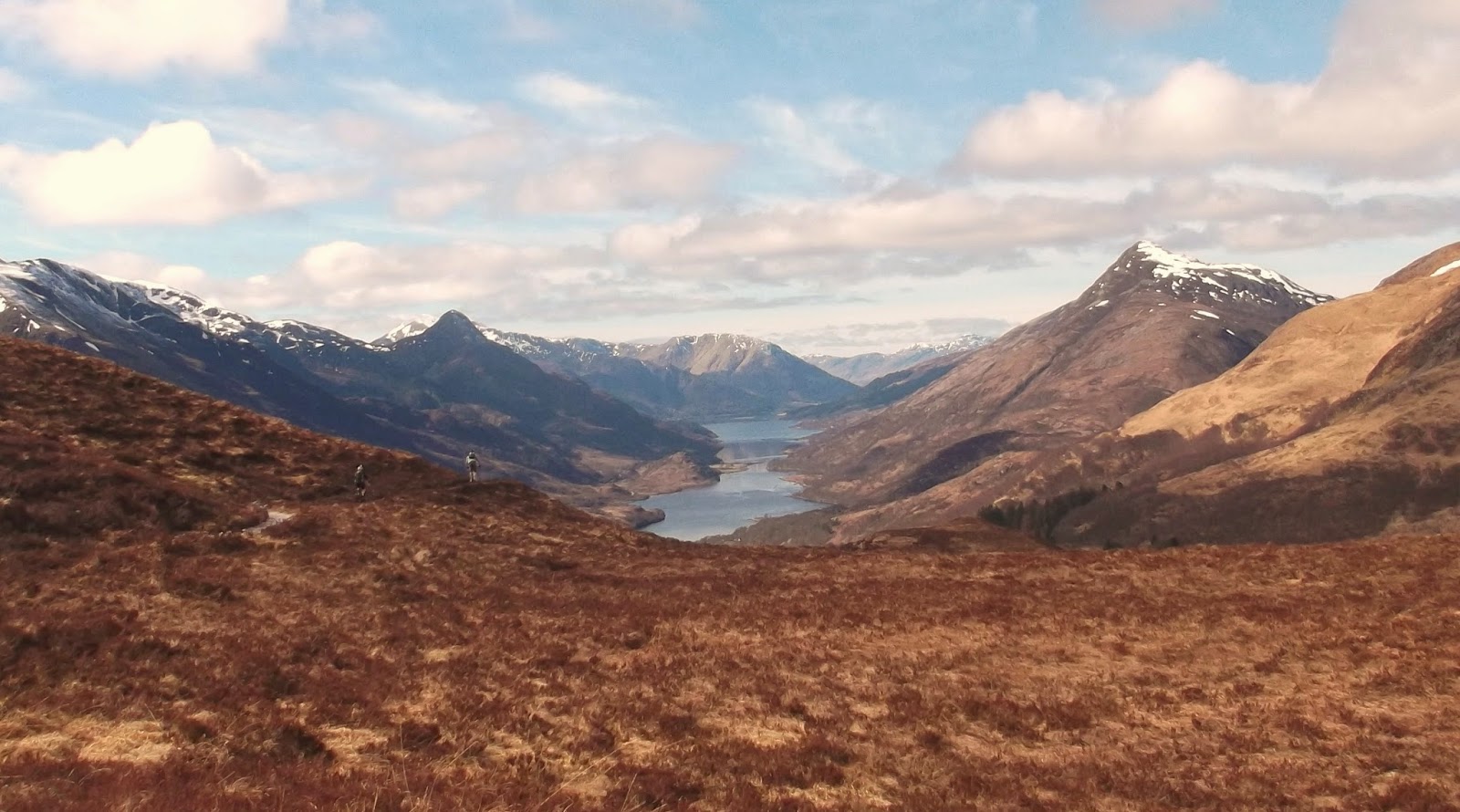 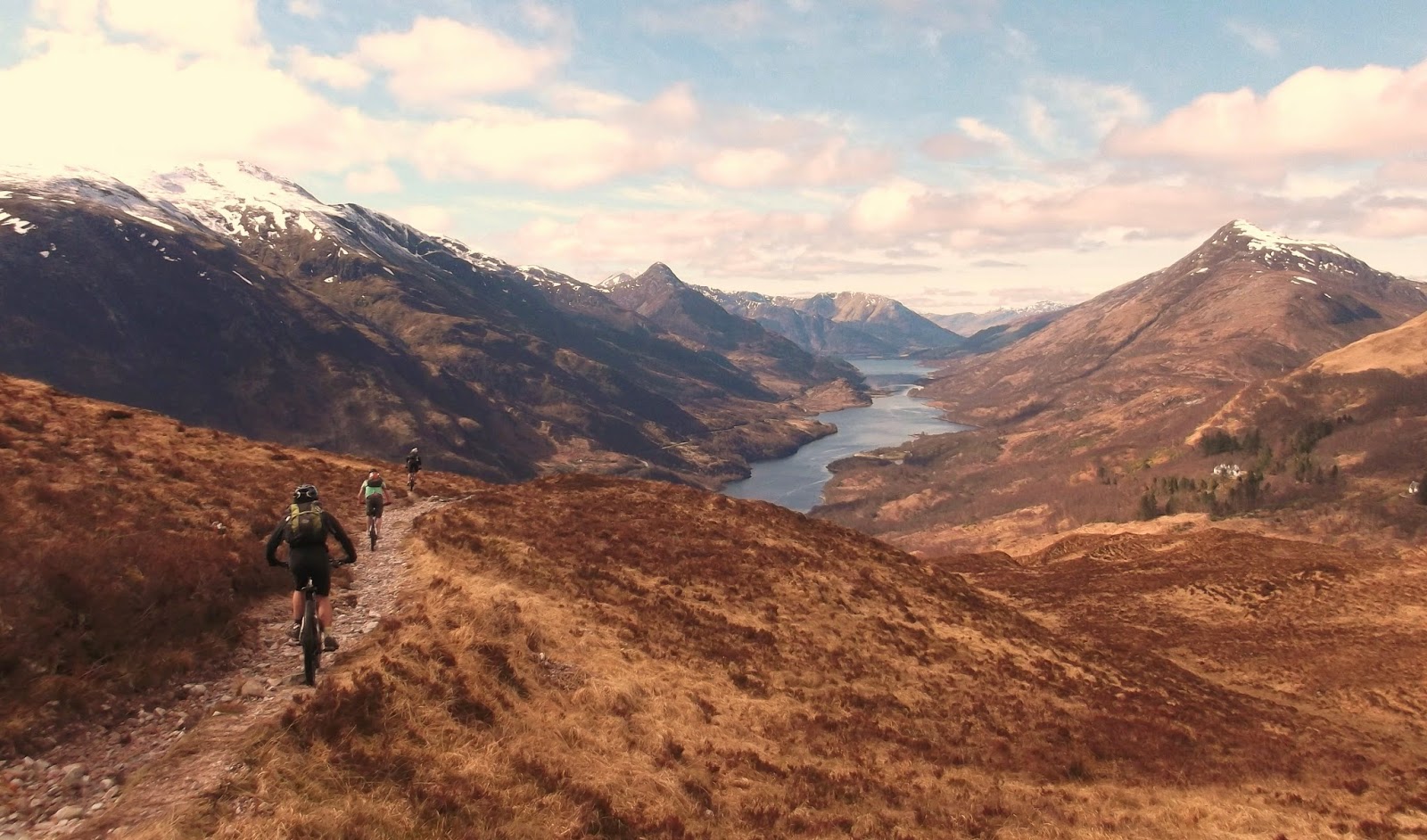 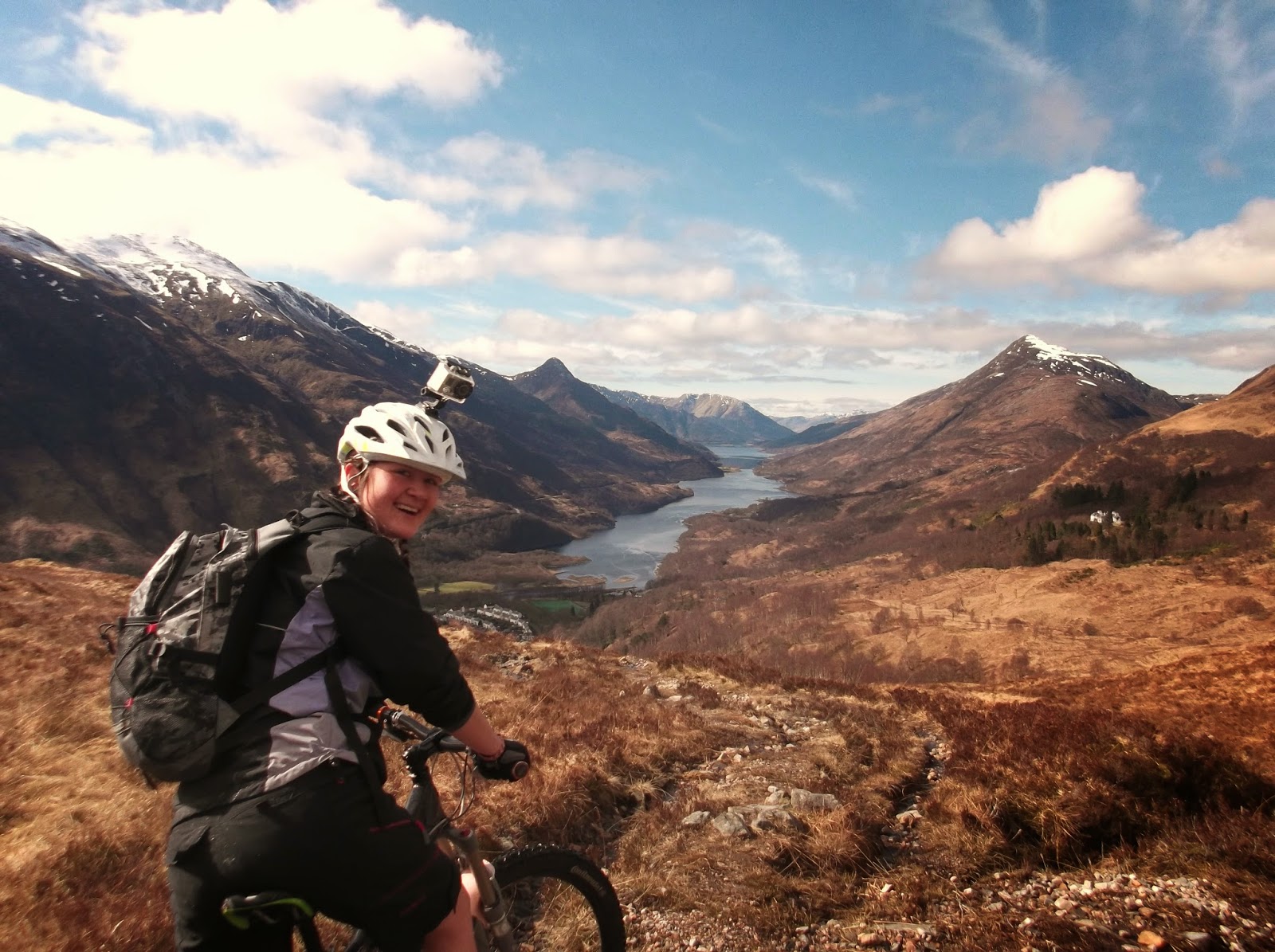 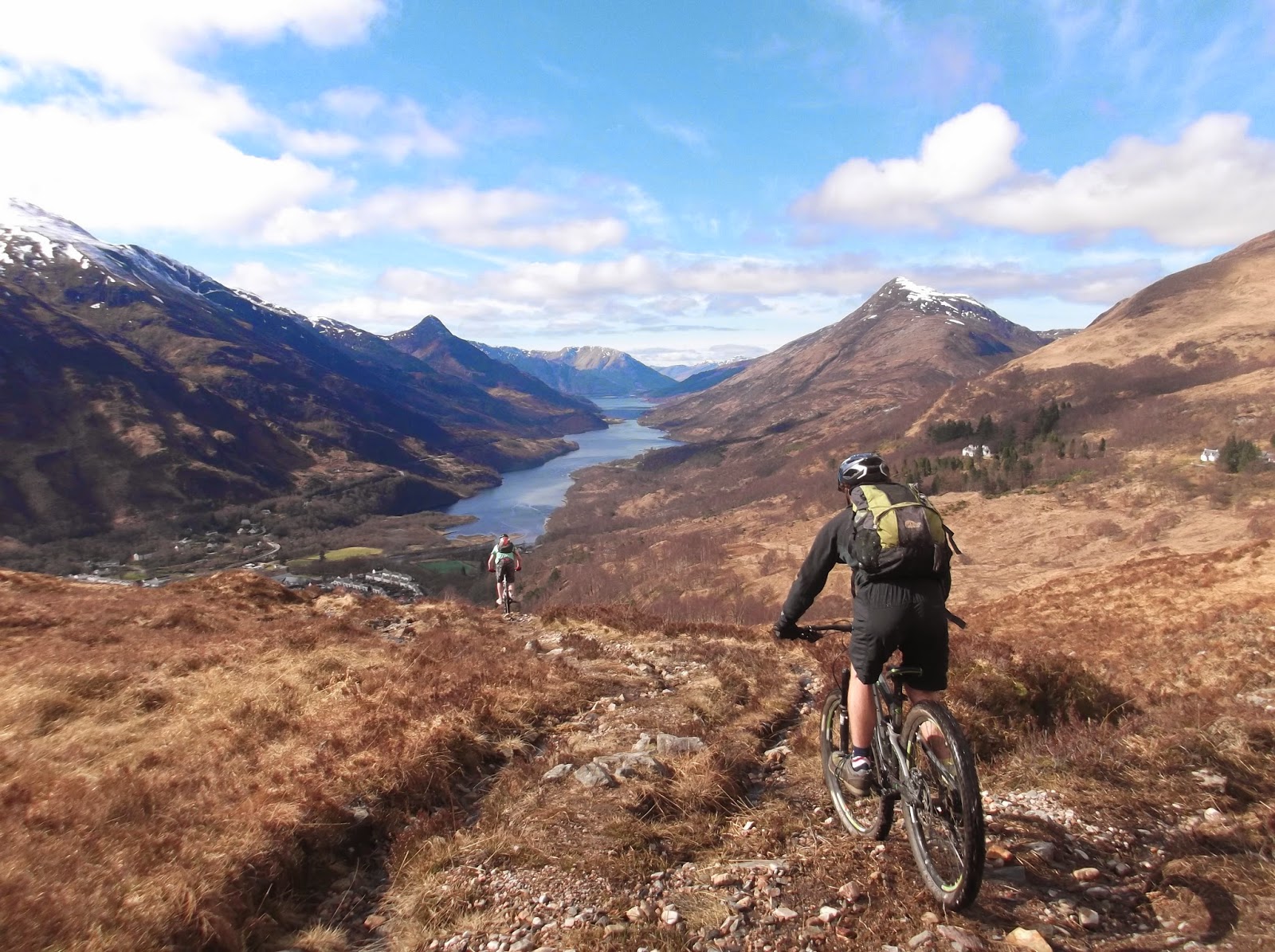 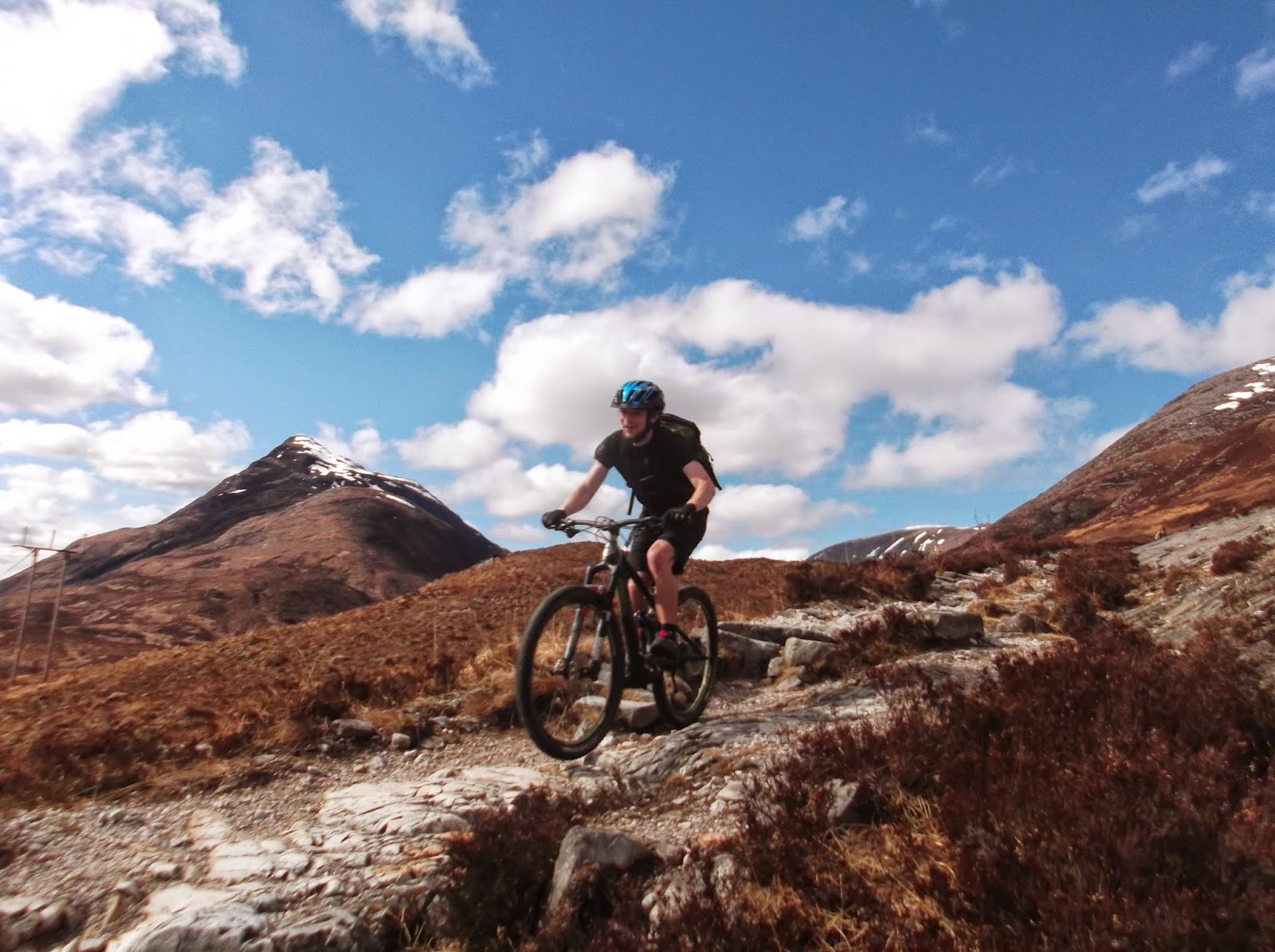 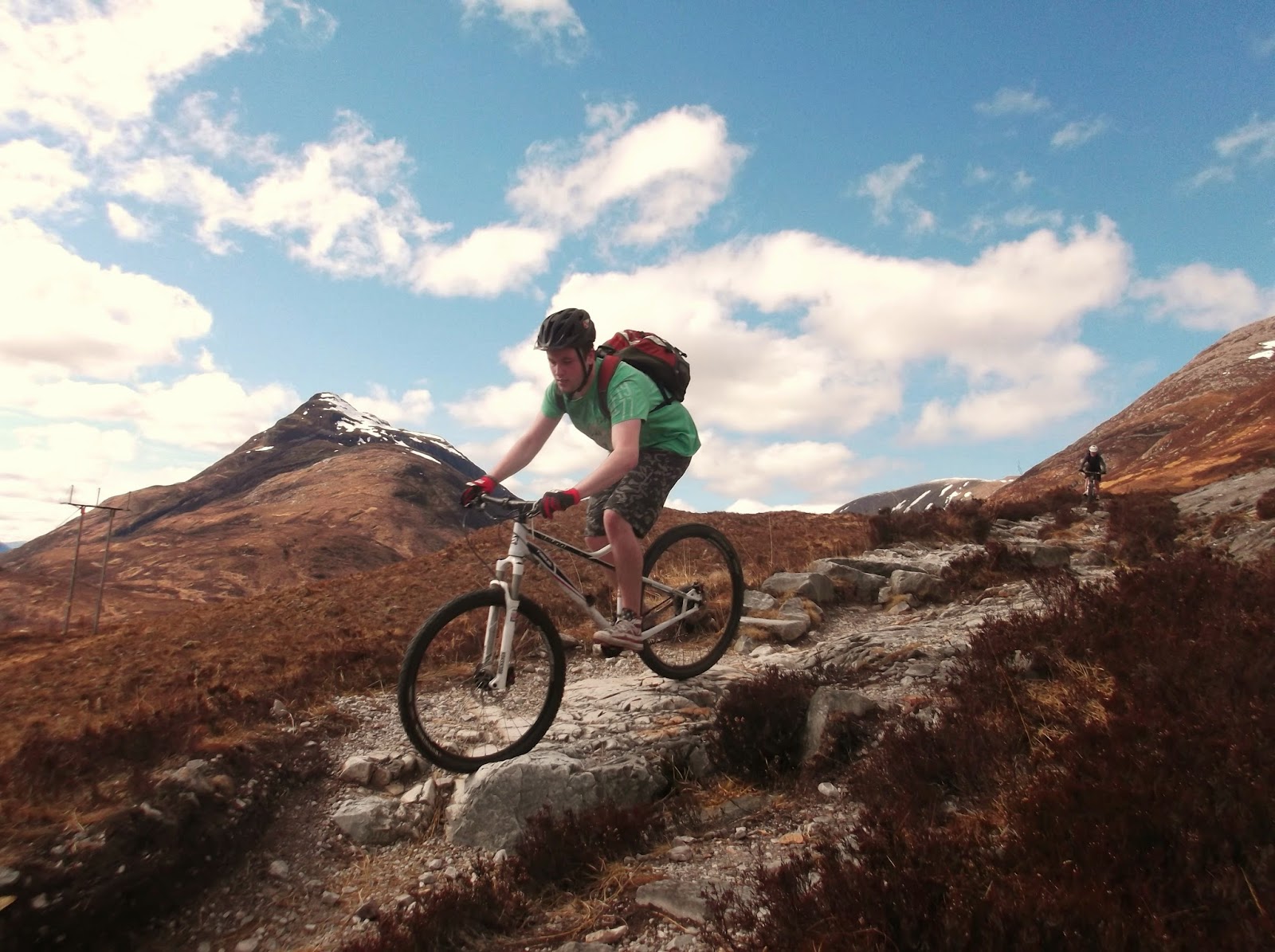 Posted by Scott Kirkhope at 01:07 No comments:

The weather the last few days has been stunning in the Outdoor capital, with light winds and blue skies. Thursday saw an aborted attempt to go snowholing with a group from the University of the Highlands and Islands due to gale force winds and heavy rain above the summits. Friday on the other hand dawned beautifully and we did manage to get up into Coire a Leis for the group to at least dig a couple of snowholes.


I was working for Hebridean Pursuits this weekend on a mountaineering course with a group from Heriot-Watt. We had a great day on Sron na Lairig on Saturday and then West gully in the north-east coire of Beinn an Dothaidh. The guys did great and we had both routes to ourselves and in alpine conditions!
Winter still has a strong hold on the Scottish hills and there will be plenty of climbing to be had for a while yet, right now though, I'm going to enjoy a few days off. 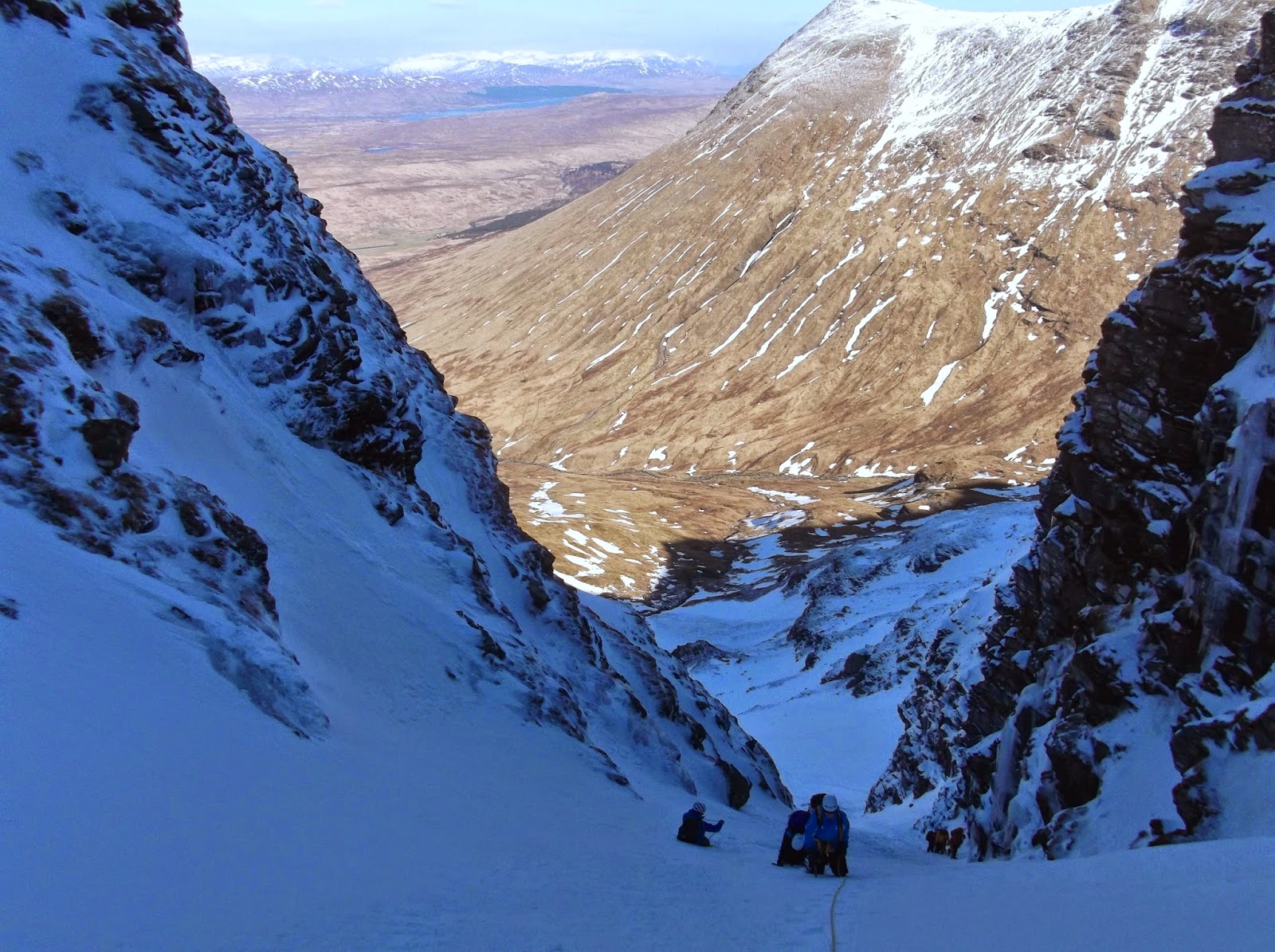 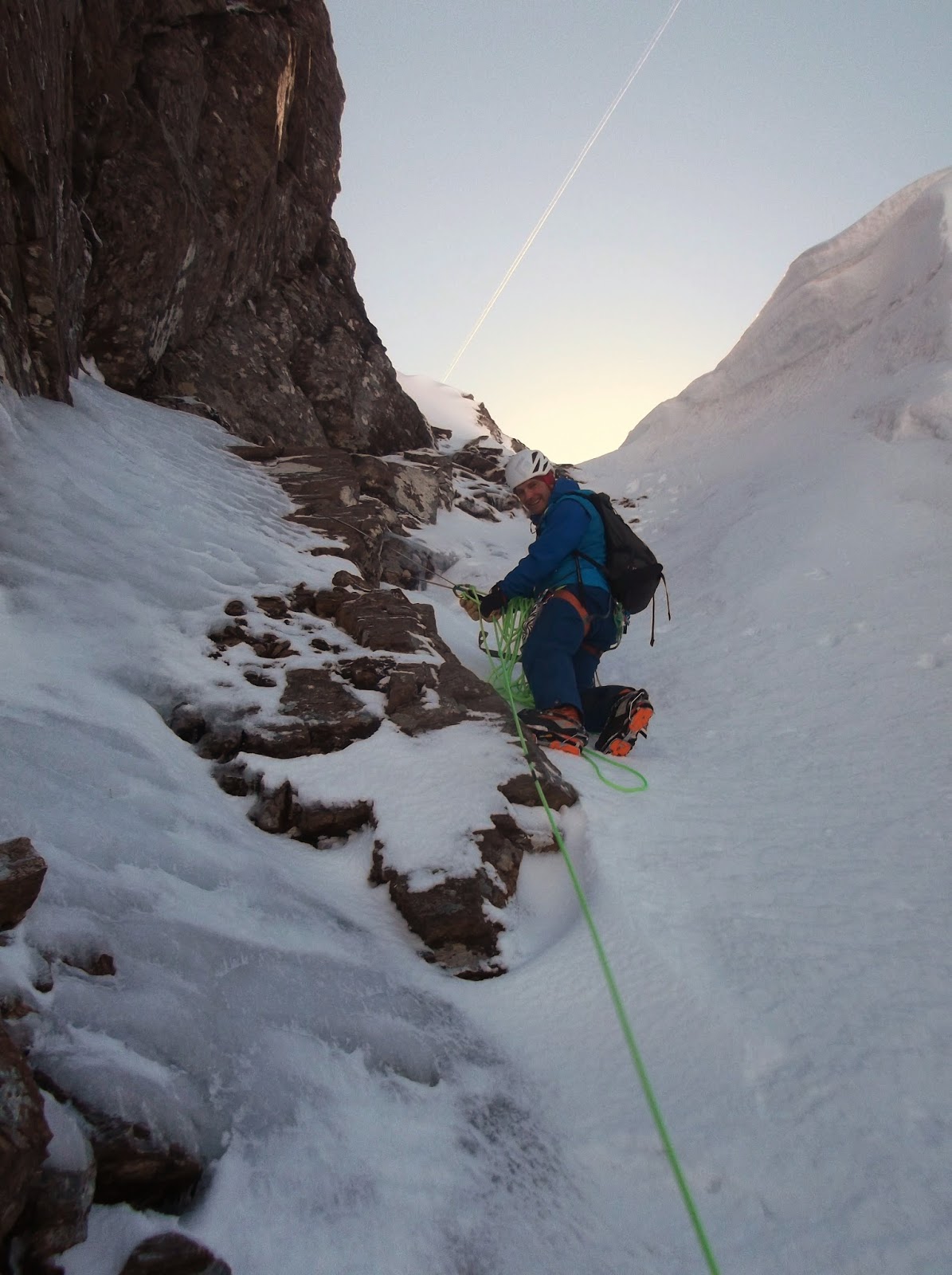 Posted by Scott Kirkhope at 02:09 No comments:

A lot of wet weather and what's left.

Thursday and Friday I was joined by Rich Parker and Nick Cannon Jones to help out with a great group of guys who had come back after a great couple of days last year. Unfortunately the weather was not so kind to them this year but we still managed to get out on both days. Rich and I took our teams up Eastern slant in Glencoe on Thursday and managed to get up the route before the rain got too heavy. Nick and Pete had a great day out on the Zigzags.
Friday was a worse day weather wise and we decided to make our way up the Ben just too see what we might get done. With the driving rain, warm temps and avalanche potential we decided to just make a mass ascent and descent of  West gully. A big thanks to Nick and Rich and lets hope the boys get some better weather next year, when they return.

Today I was out with Mariano for his first taste of winter walking. After a session on route planning we made our way up to the North face of the Ben and had a bit of a journey around the north face to give Mariano plenty of time to get used to moving around over different terrain.
The thaw has done some damage with all of the lower level ice falls just about gone. Higher up still looks good and there was good reports from Indicator wall. The Central gullies still looked complete but the whole of Creag Coire na Ciste is still threatened by cornices. Hadrians was climbed today and a team turned away from Point 5 due to a whole in the first pitch. The minus face looked very bare and Orion face has definitely lost a lot of the ice that was there. So winter is far from over and there is still time for ice to build with the forecasted freeze/thaws but there is a lot less choice for now. 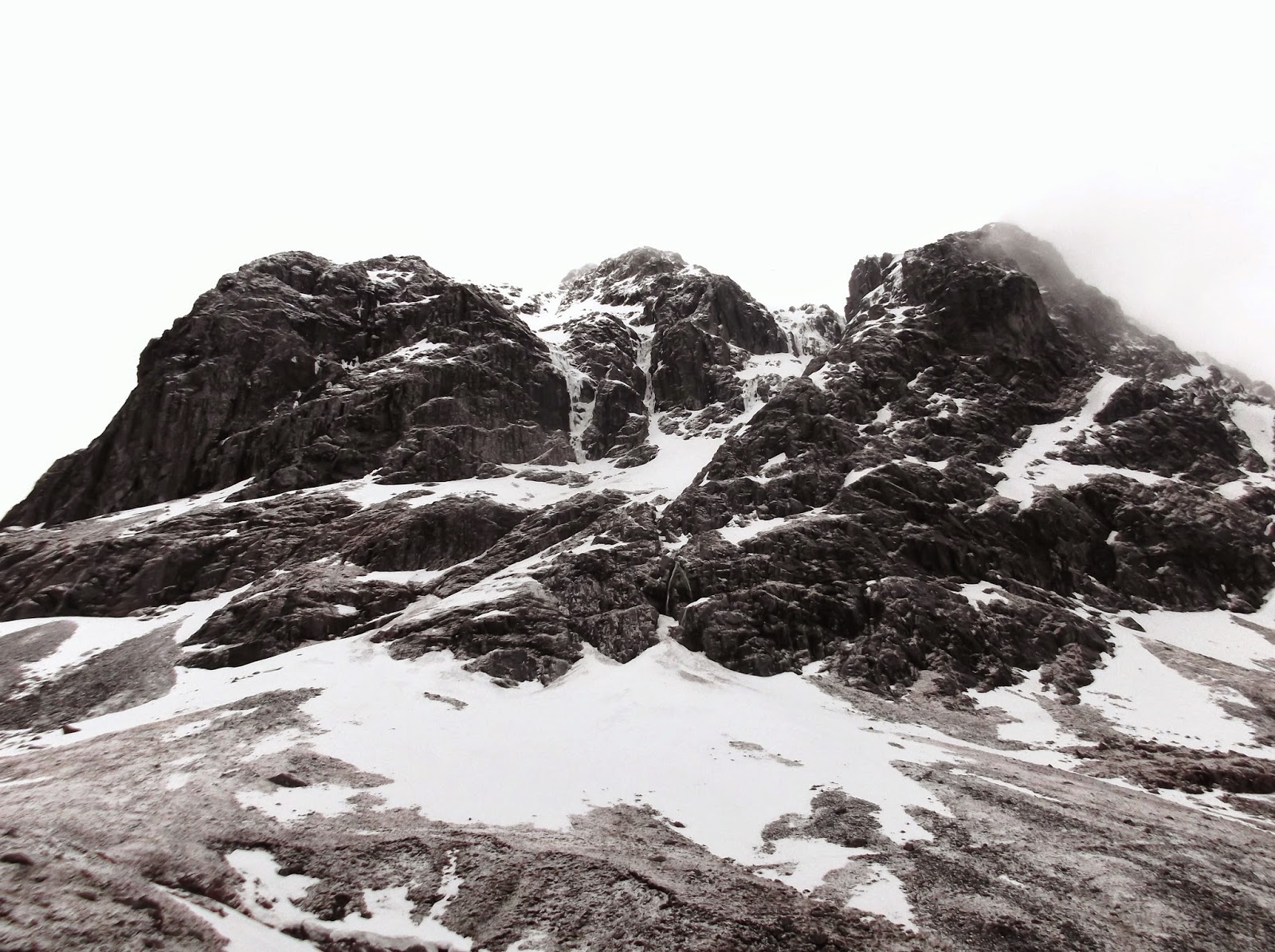 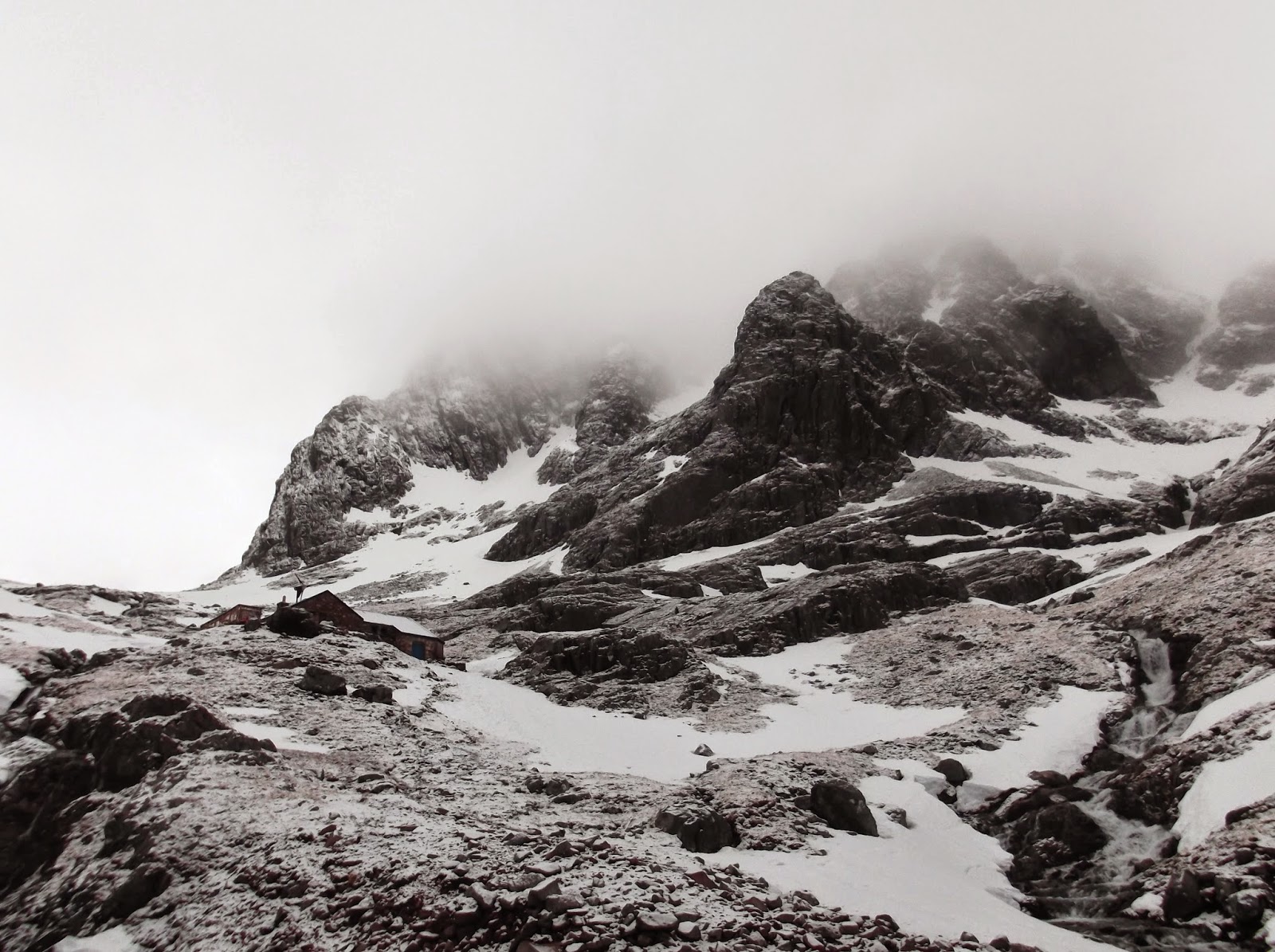 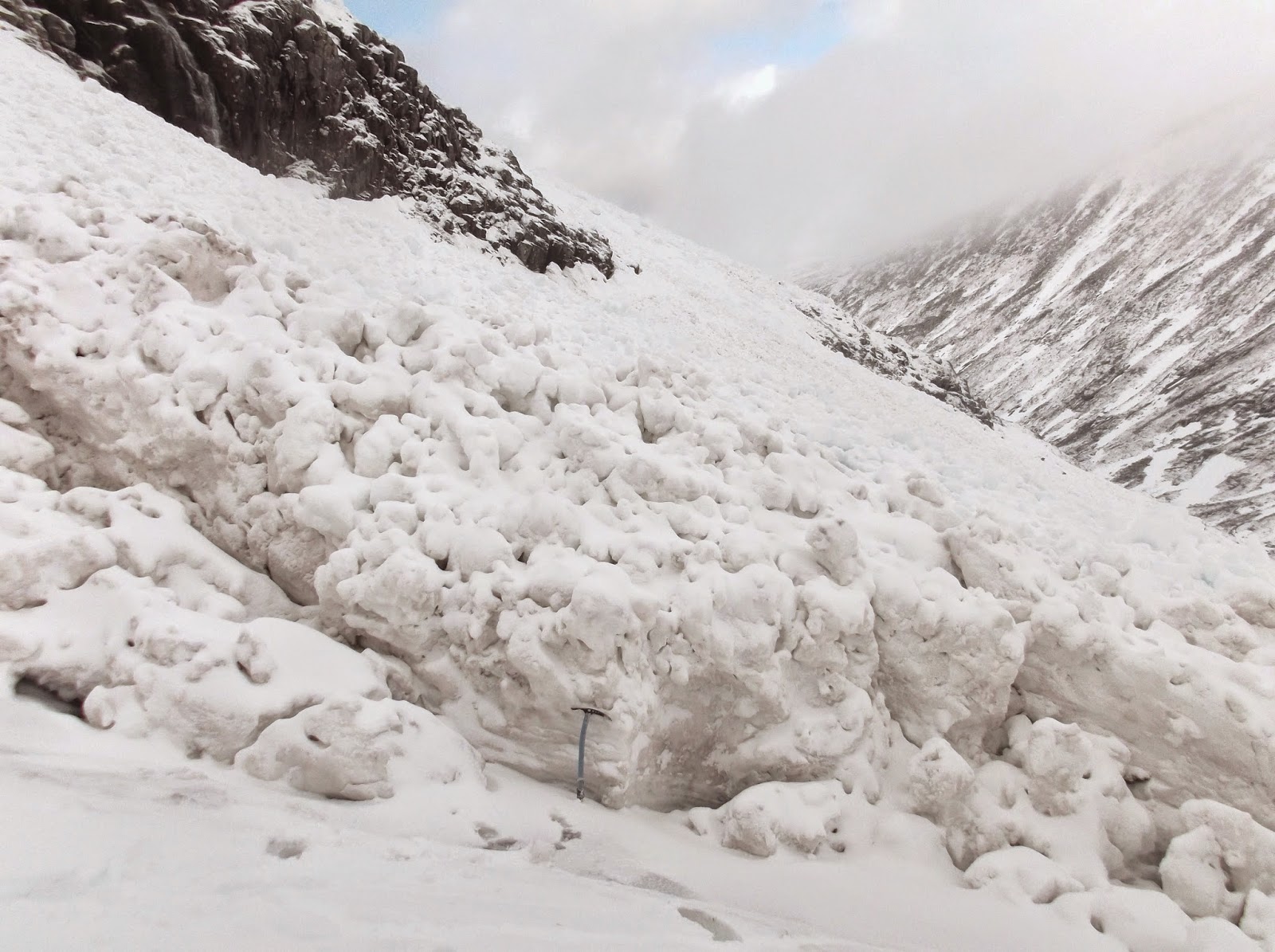 My axe for scale, showing the depth of the wet slide that has come out of  No.5 gully.
Posted by Scott Kirkhope at 12:32 No comments:

Full on conditions on North Buttress.

Pete is a very keen climber and has some Lakes winter under his belt but today was about sampling some Scottish winter, he didn't just get a sample of it, he got a full taste of it, in the face, over and over again. With the avalanche conditions, strong winds and more snow forecast, we headed for North buttress on the Bauchaille. After a great deal of wading and swimming we finally managed to get to the route, which gave us three great pitches of  IV,4 and a whole lot of weather. We abseiled back down the route to avoid topping out into the strong winds and we weren't alone today, as was expected but we all managed to share the route without getting in each others way, too much. A great effort from Pete and although we got a battering, I know he will be back. 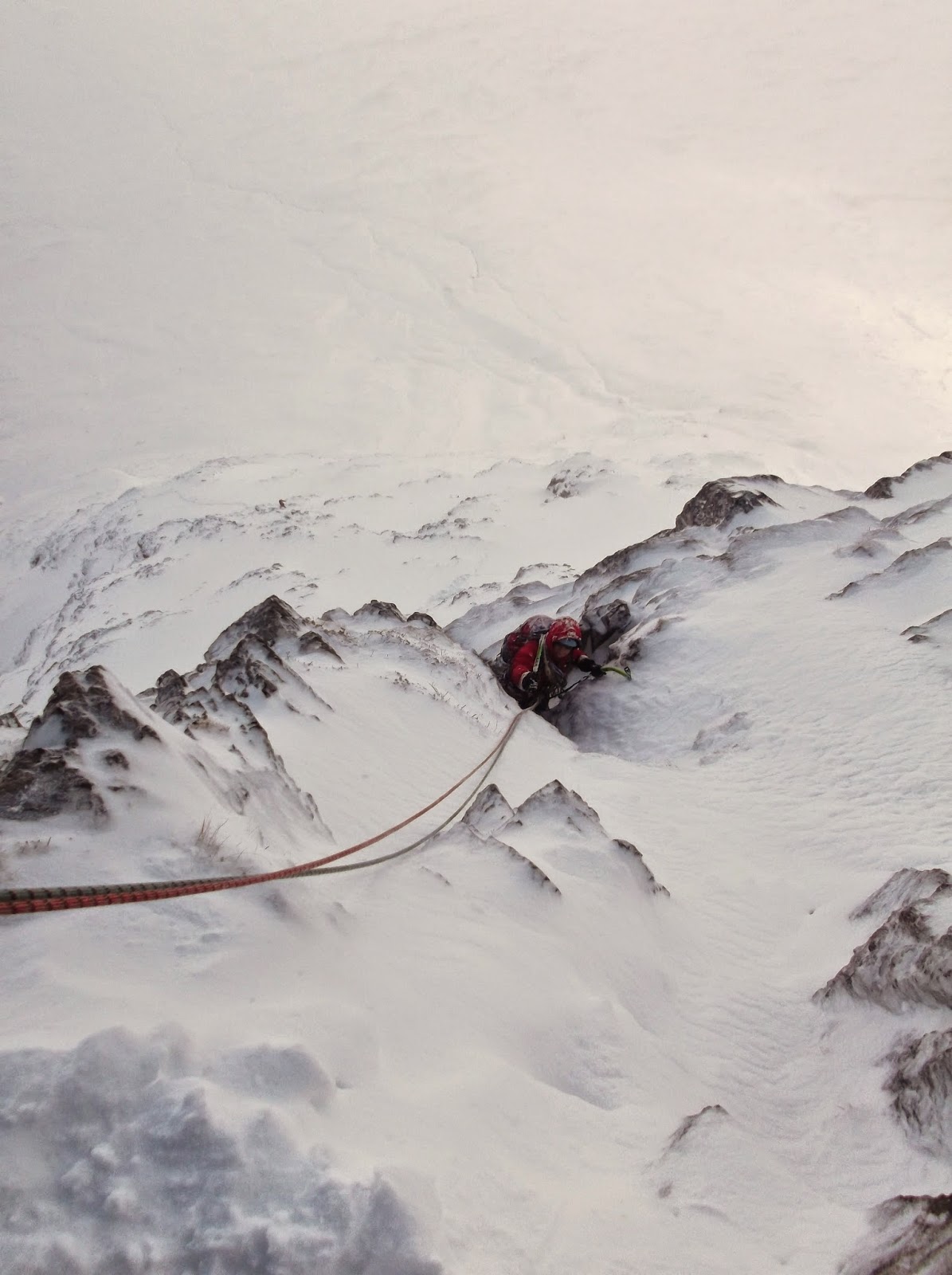 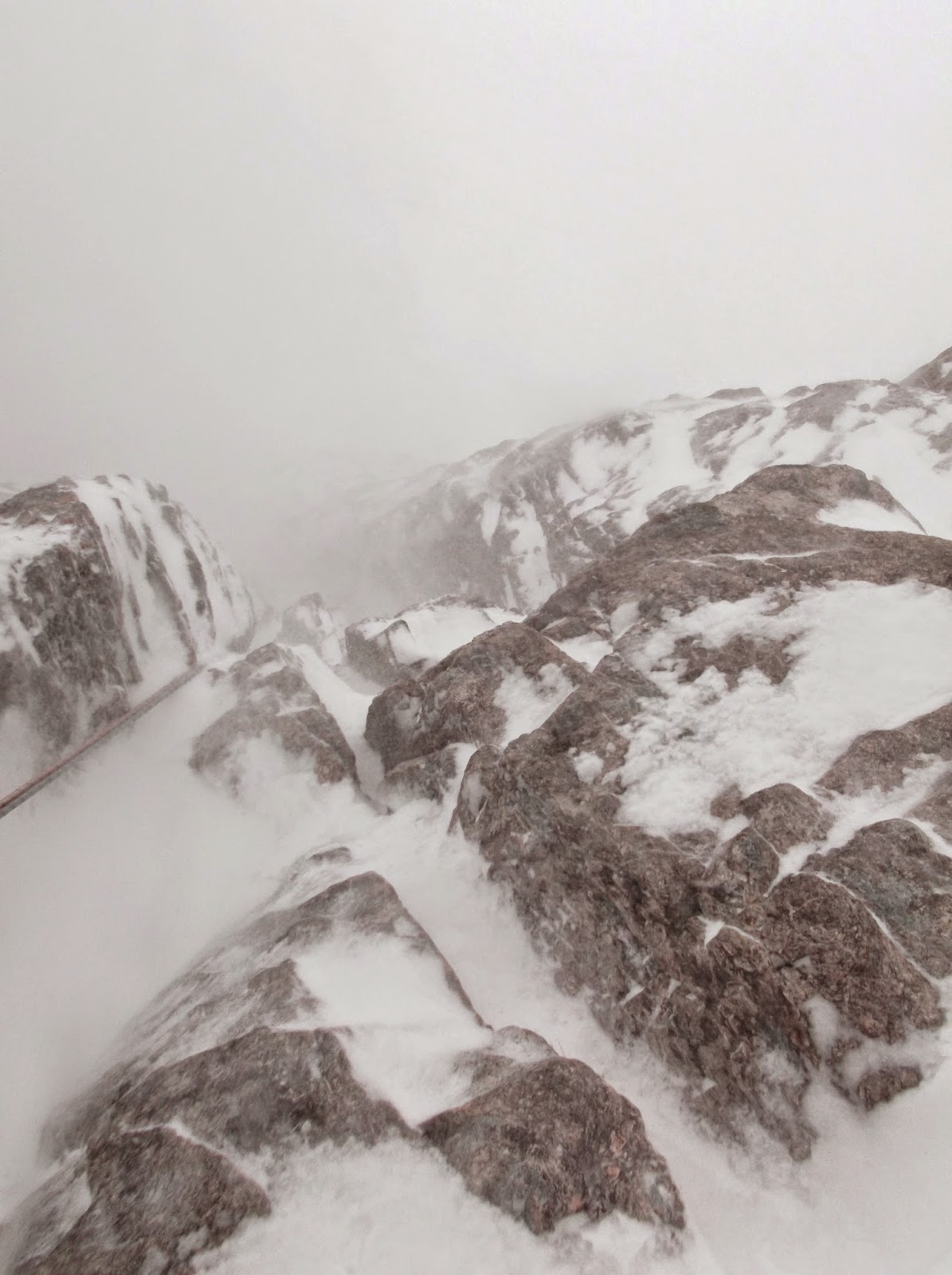 He's down there, somewhere! 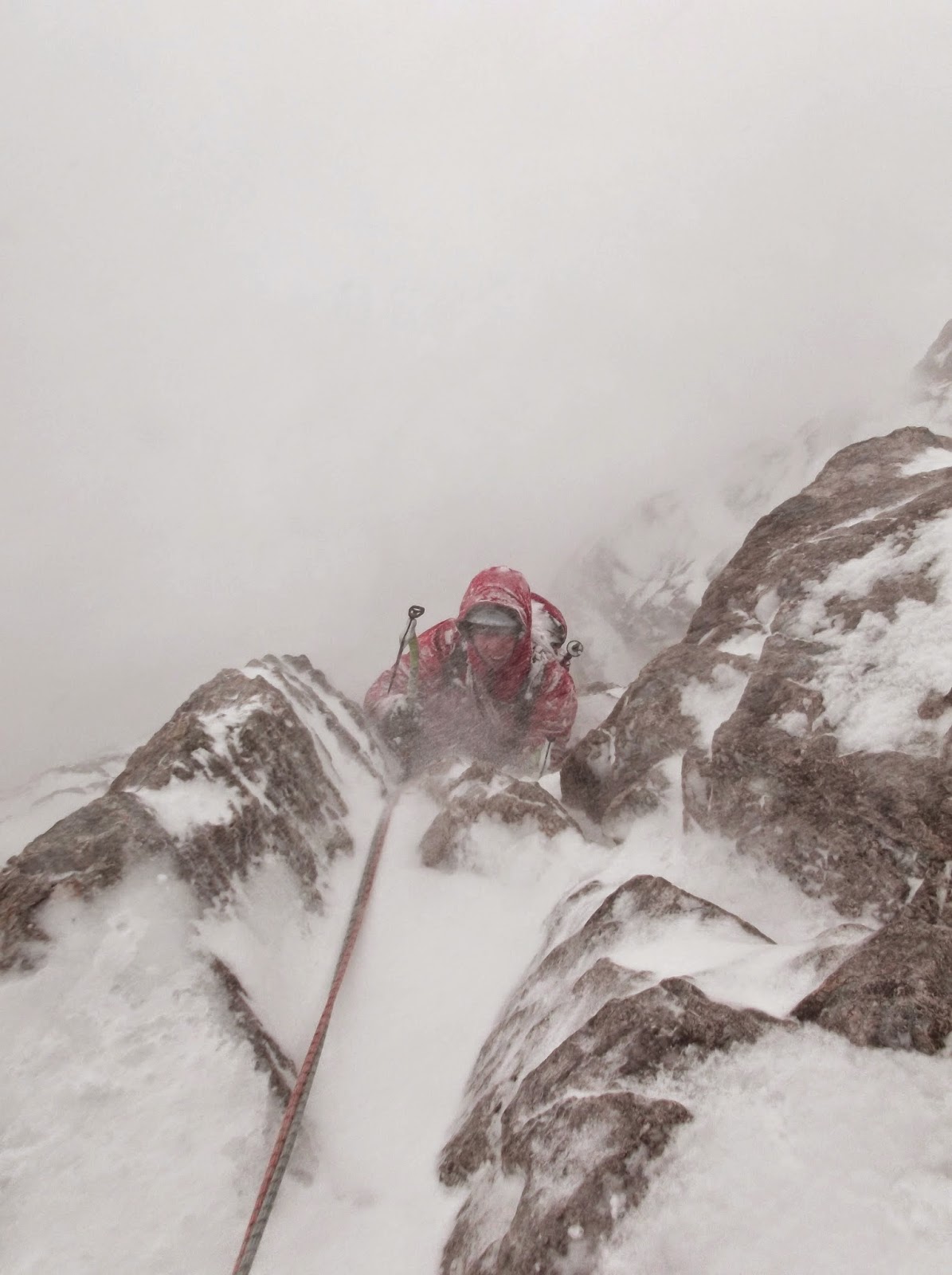 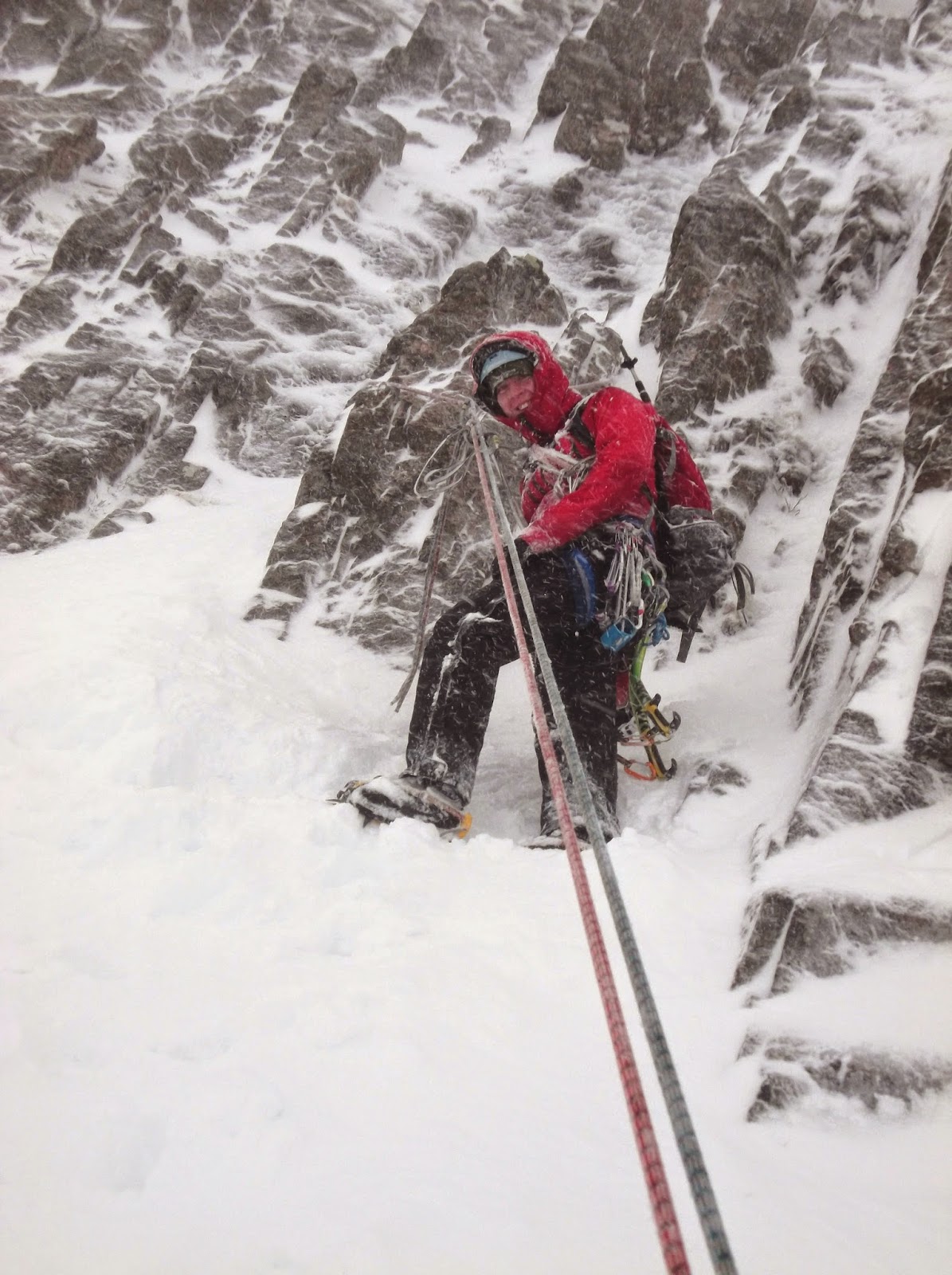 Posted by Scott Kirkhope at 11:25 No comments:

What it's all about.

I've been out with Dave this weekend, who I have been working with for four years now. It is great to see people coming back time after time ,each time being more and more confident and proficient than the last. I remember his nerves on our first mountaineering route together but this weekend he moved with confidence and efficiency. Going climbing as a mountaineering instructor is great but so too is seeing people grow as mountaineers and then hearing about their own adventures during the year.

We climbed the East ridge of the north top of Stob Ban on Saturday and then the South west ridge of the Douglas boulder yesterday during some pretty wild weather. There were a few other teams out, all of whom were taking advantage of the mid level routes in the strong winds. Most of the mid level ice routes on the Ben are still there and will probably be improving with the cold temps we have forecast for the next couple of days. There is also a lot of snow around and careful route choice will be important. 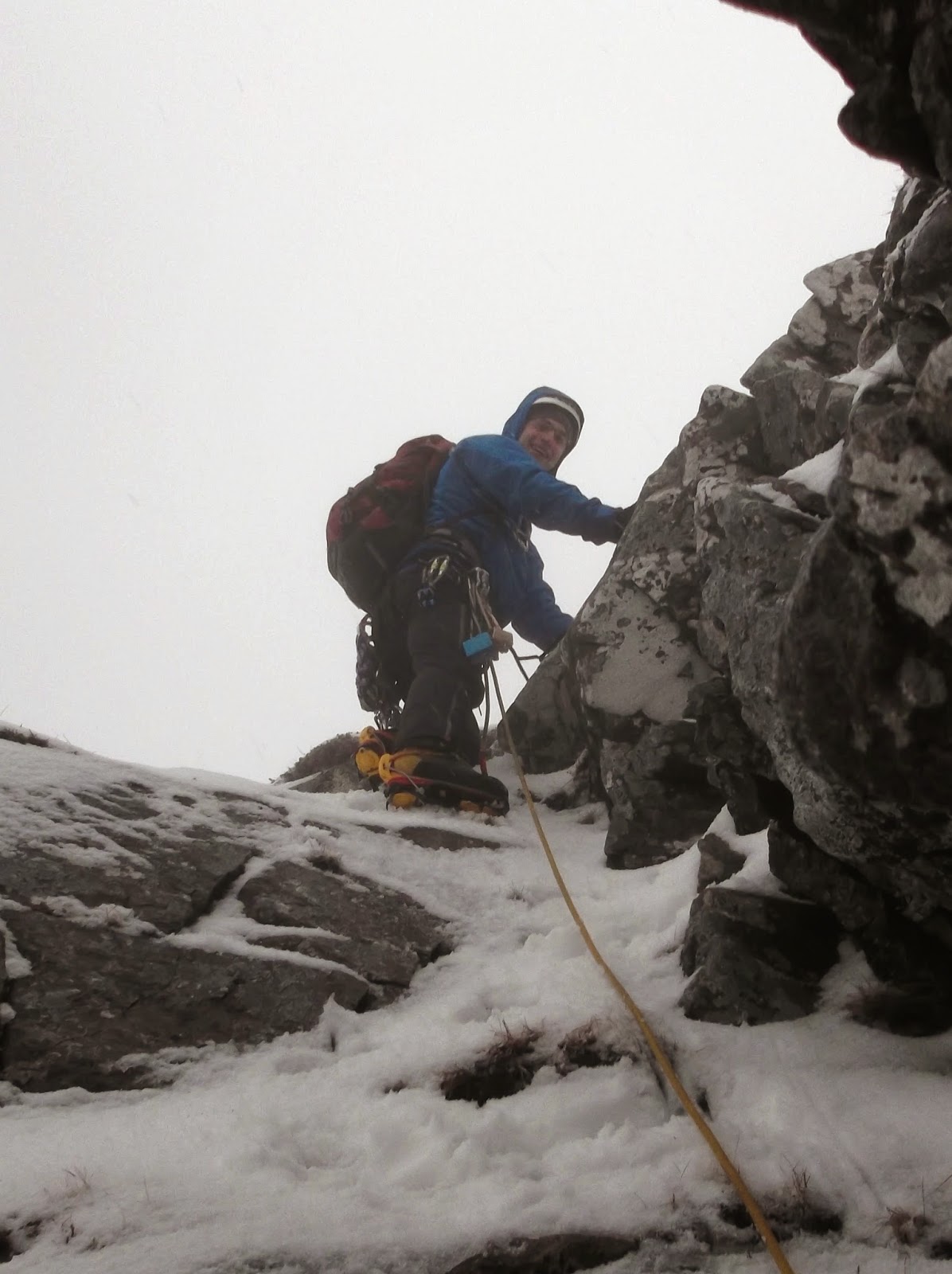 Dave setting off on the lead.
Posted by Scott Kirkhope at 03:21 No comments: